'George' - the Beekeeper of Beeston Content from the guide to life, the universe and everything 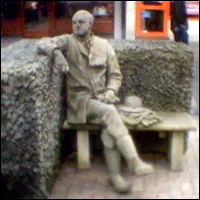 If you ever have the chance to pass through the small town of Beeston, Nottinghamshire, UK it is worthwhile resting your weary traveller's feet and having a sit down with the Beekeeper of Beeston. He's a popular character; children love to sit with him and many affectionately call him 'George'. Don't be offended if he doesn't strike up a conversation though. This isn't because he's rude or mute, it's simply because he is in fact a statue.

Situated in the middle of the busy pedestrianised shopping section of Beeston High Road just off Villa Street, the beekeeper sculpture is a local icon as it honours the name of the village in a roundabout way. Beeston has no history of beekeeping or apiaries, and in fact the name Beeston is a bastardisation of the original name, recorded in the Domesday Book, of Bestune1. The beekeeper does not represent any famous local and was simply made in keeping with the town's buzzing atmosphere, with the local council and schools also incorporating images of bees and hives into designs on signs, uniforms and even litter bins!

The sculpture, made by artist Sioban Coppinger in 1987, consists in the main of two L-shaped concrete hedges. In the angle of one hedge the concrete figure of an elderly man (there is said to be some resemblance to the artist's father) sits on a bench, complete with beekeeper's hat and gloves lying beside him. He wears an overcoat and Wellington boots and in his right hand is a smoking pipe. In his left hand he holds a block of honeycomb. At the angle of the other hedge is a concrete carved tree-stump on top of which is set a conical beehive. The hive, and many other parts of the sculpture, are covered by small bronze bees securely stuck to the surfaces. A few of the bronze bees have been knocked off as souvenirs, but all in all the Beekeeper is in good condition.

Beeston is home to many students, most studying at the nearby University of Nottingham, so unfortunately the bee-man is sometimes the victim of pranks, most commonly being given a red and white fuzzy wig during any time England are competing in a sporting event such as the football or rugby World Cups. Situated close to some of the rougher pubs in Beeston and the Beeston snooker hall, he is also near a popular fast food outlet which is a haunt for many of the local youths. These youths are often rowdy and unruly2, occasionally splattering the statue with rubbish and food-waste. Drunks and vandals like to make the Beeston Beekeeper the target of their anti-social behaviour, however, George is looked after well by the local council and often gets 'a shave and a haircut'- that is he is cleaned of graffiti and any damage is duly repaired.

An Audience With 'George'

As mentioned, the sculpture is located in the Beeston pedestrianised precinct. To see the Bee-Man for yourself, the easiest way is to travel in from Nottingham City Centre. A number of buses have routes from the City Centre through to Beeston Bus Station, and a five-minute walk from the bus station through Beeston Market Square and over Station Road will take you to where George constantly sits, a happy beekeeper's smile forever on his face.

1Which from all accounts has origins in 'bes' - rye grass and 'tune' - town.2The term 'chavs' could be applied.