The Soma Cube Content from the guide to life, the universe and everything 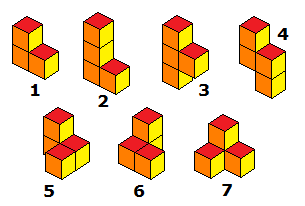 This is a puzzle that is deceptively simple. It consists of only seven simple pieces, each composed of three or four small cubes, that can be fitted together to make a single larger cube. Trying to recreate the larger cube from the pieces seems as though it should be easy, but it can become very frustrating when one comes to try and fit the last piece in and it's the wrong shape. Surprisingly, however, there are many ways in which it can be done.

The cube was the creation of Piet Hein, who was inspired during a physics lecture to consider the simplest shapes formed from cubes. What this had to do with the subject of the lecture is dubious (apparently the division of space into cubes came into it), but it certainly proved more profitable than the doodling many students create in lectures.

Piet Hein applied for a patent for this puzzle in 19331. It became a fad in Denmark, but was little known outside the Scandinavian country until Martin Gardner wrote about it in the Scientific American magazine in September 1958, and it grew further in popularity when the Parker Bros released a version in 1969. There are now a plethora of websites about the puzzle.

The Soma cube consists of seven pieces each constructed from unit cubes2. The shapes of these pieces are 'the seven simplest irregular combinations of cubes', with cubes joined only face to face. All seven pieces are shown in the diagram. You can see what is meant by 'irregular' by noting that, in each Soma piece, there is at least one 'kink' formed by three cubes joined together in an 'L'-shape. A fourth cube may also be attached.

Six of the pieces are made of four cubes and the seventh by three, making twenty-seven cubes in all. Piet Hein said that, when he first imagined these pieces, he didn't know whether they would form a 3 x 3 x 3 cube, and found it 'a beautiful freak of nature' that they did. In fact the seven pieces fit together in 240 different ways to make the 3 x 3 x 3 cube (not counting rotations and reflections). 239 of these solutions can be linked together in what the mathematician John Horton Conway called a Somap, with adjacent solutions differing by no more than three pieces in alternative positions. If you can find one solution, it is quite likely you can find others by only moving a few pieces.

As with pentominoes and tangrams, a large bibliography has grown up of other shapes that can be formed from the pieces, and this extends the puzzle-solving fun.

Piet Hein took the name 'Soma' from a Sanskrit word, with the original explanation that 'SOMA is the ancient Indian symbol for life's diversity and the universe's hidden connection', which is an apt description of the puzzle. This definition is not generally found in contemporary dictionaries. Modern dictionaries allow that 'soma' is indeed Sanskrit, being a sour milky intoxicating drink derived from Sarcostemma acidum (also known as 'soma'), a leafless East Indian vine, used in Vedic rituals. This meaning, and the following one from Brave New World, have both been used to compare the cube with a drug that can induce euphoria.

By a curious parallel, in the early 1930s, the name 'Soma' also appeared in Aldous Huxley's book Brave New World. In the futuristic novel it referred to an addictive drug with no adverse side effects, taken by people when they were neither distracted nor busy3. Similarly for many people who try it, the Soma cube becomes an addictive habit, often taking up time when they should be busy! For some the Soma cube can also be used like the Utopian drug to calm themselves from life's everyday frustrations.

1Not in 1936, as some sources have erroneously stated. See the official history of Soma.2Unit cubes are cubes all of the same size.3Aldous Huxley may have also taken inspiration from Sanskrit, but there is no clear evidence that either Hein or Huxley were inspired by each other.