Walpurgis Night Content from the guide to life, the universe and everything 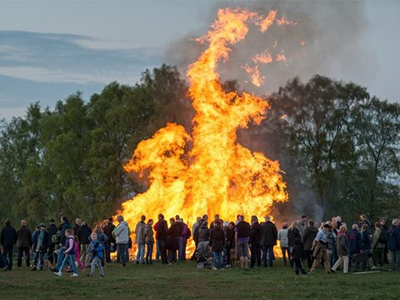 While many people may be familiar with Walpurgis Night from books and films relating to Dracula, it is much more than those stories would have us believe. Walpurgis Night is a traditional holiday celebrated on 30 April or 1 May every year in Germany, Finland, Sweden and many other Baltic states. Also known as Cross Quarter Day, it is closely connected to the English holiday May Day; both, in all likelihood, stem from the pagan rite of Beltane. The excuse for a get-together, a drink and some fun go back a long way! For a chance to experience Walpurgis Night for yourself, the following three festivals provide the best opportunities.

In Germany, Walpurgisnacht, is the night when witches, demons and spirits hold a huge party, much like the images accompanying the Night on Bald Mountain suite in the Disney animated film Fantasia (1940). It is celebrated in a similar way to Halloween, with tricks - such as the winding of toilet paper around cars, the smearing of door-handles with toothpaste or the unhinging of garden doors - being played on unsuspecting people. In order to combat this, anything that isn't nailed down is brought inside; even so, amazingly, anything from doormats through to potted plants can disappear during the night! Many also put out a slice of bread liberally spread with butter and honey, called Ankenschnitt, for the phantom hounds in order to protect all from bad weather and ensure crops don't fail.

The younger children dress as witches or monsters, bells are pealed and there may even be blessings with holy water. Blessed sprigs can be found hanging over the doors of homes and barns to ward off evil. The most widespread remedy against evil beings during Walpurgisnacht, however, is noise. As soon as the sun sets, everyone does their level best to make as much racket as possible, from shouting and beating sticks to shooting guns! Most Germans also Tanz in den Mai1 and generally get up to much drinking and mischief-making as possible over the night of 30 April - and justifiably, as 1 May is a public holiday! But it is all in good fun and definitely something to get involved in, especially in the smaller villages in Bavaria.

In Finland 'Vappu' is, along with New Year's Eve, the biggest carnival-style festivity in the country. The celebration calls for an extravagant amount of balloons, whistles of many sorts and paper decorations combined with excessive consumption of alcohol. From the end of the 19th Century, 'Vappu' has been commandeered by graduating university students to celebrate receiving their white graduation caps and gowns.

The students use the festival as an opportunity to get blind drunk, and in the capital, Helsinki, tradition sees the 'capping' of the statue of the mermaid Havis Amanda (the 'darling of the sea') spraying her with champagne and adding soap to the fountain at her feet to signal start of the party! Students also take great delight in producing magazines called Äpy and Julkku for 'Vappu'. Äpy is the favoured, as it is more of a chance for the students to mock or satirise their lecturers, politicians and peers. It is often printed on an eclectic mix of products - anything from milk cartons through to bedsheets and toilet roll paper. The celebration is all extremely infectious and fantastic to join in with, especially if you can hold down your vodka!

1 May is a public holiday in Finland, and political gatherings are organised all around the country to celebrate Labour Day. For many Finns however, the day is spent outdoors, soaking up the atmosphere of a new Spring and enjoying traditional delicacies and drinks that are especially prepared and brewed for the occasion, such as Tippaleipä, sweet pastries that resemble donuts and Sima, a type of sweet mead - even if it is still snowing!

'Valborg' Night is one of the main holidays during the year in Sweden, alongside Christmas and Midsummer. It is celebrated differently throughout the country; however, the most common occurrence is the lighting of large bonfires - this practice originates from early pagan fertility festivals. At these fires people burn small straw effigies or household items such as brooms or cloth, to see in the new Spring. One of the older traditions is for children to collect branches from the woods at twilight, which are then used to adorn local houses. The reward for this activity was eggs, but now the chocolate variety seems to have taken their place.

However, the singing of songs is more commonplace during the festival, and the old university cities of Uppsala and Lund have a long standing tradition of both current and graduate students gathering at many events during 30 April, or Sista April2 to sing to the public and generally make merry. The Swedish are also very welcoming, so it's not uncommon for visitors to Sweden on 'Valborg' Night to be dragged into the fun!

1 May is also a public holiday in Sweden, and a wide choice of events, marches and demonstrations take place across the country to celebrate Labour Day, as in Finland. Many Swedes spend the day either attending the rallies held by political parties or trade unions, while some prefer to enjoy picnics in the new spring weather. Others - students for the most part - use the day off to nurse their hangovers from the night before...

Walpurgis Night is apparently named in honour of Saint Walburga, the patron saint of coughs, famine, plague and storms (particularly at sea). Born in Wessex, England circa 710, a niece to Saint Boniface, she travelled with her uncle and brothers to Württemberg, Germany in 748, where as a nun she lived and later became Abbess of Heidenheim Kloster. She was involved in healing many of the local people and although she died on 25 February, 779, she was not canonised by Pope Adrian II until 1 May in the same year. Whether it is merely a coincidence that the date of her canonisation coincided with many pagan rituals (like Beltane) that celebrated the coming of new life and spring is uncertain, but people were then able to celebrate both under Church law. At present though, it is a festive occasion for all to enjoy, whether you're a pagan, a churchgoer or just a plain old party-animal!

There is a mountain very high and bare...whereon it is given out that witches hold their dance on Walpurgis Night!
- Jacob Grimm, 1883.

1Dance in the May.2The last day of April.