Dame Ellen MacArthur - Yachtswoman Content from the guide to life, the universe and everything 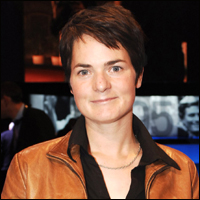 Ellen MacArthur MBE is one of Britain's best known and loved sportswomen. She is a yachtswoman who shot to fame after she finished second in the gruelling Vendée Globe single-handed Round the World race.

Ellen MacArthur was brought up in Derbyshire, England. In 1981 she was taken for a short trip on her aunt's boat, Cabaret, and loved the experience. After her experiences on Cabaret she bought a boat of her own - an 8-foot dinghy, which she named Threep'ny Bit, after a coin of the same name1 which she found in one of its cupboards.

While studying for her GCSEs, Ellen bought Kestrel, having since sold Threep'ny Bit. She refitted much of the boat herself and kept it for two years, sailing during the summer. Meanwhile, she had begun her A-levels.

Ellen took part in several courses at The David King Nautical School. She achieved a high standard during these courses but had to take time off school when she caught glandular fever. During her recovery, she saw the Whitbread Round the World Yacht race on television. Soon, she swapped Kestrel for a 60ft2 boat which she named Iduna after a Norse goddess.

Ellen began to teach sailing courses at the school. During this time, she also began to work on a Class 1 Open 60 Racing Yacht called Panic Major. This boat had been to the Azores and had competed in the Vendée Globe. Meanwhile, David King and his wife Maureen had secretly entered Ellen in the Young Sailor of the Year competition which she won at the age of 18.

A Beginning in Racing

Ellen's first major project was a single-handed trip around Britain. She set off in June 1995 in Iduna. Afterwards, she was offered a job to skipper one of the Sea Cadets'3 small boats. She accepted but changed her mind after she met Mark Turner at a boat show. Their conversations had got her interested in racing.

Ellen then accepted a job helping to prepare boats for big races. She helped Alan Wynne-Thomas sail Elan Sifo back to France after he competed in the Europe 1 Star (single-handed) Transatlantic Race. Soon after this, Ellen went to Quebec to compete as a member of a six-man crew in the Quebec - San Malo race in a boat called Anicaflash.

Ellen teamed up with Mark Turner, with the intention of competing in a tough race called the Mini-Transat. Ellen finished the race in Le Poisson and came 13th after nearly 24 days at sea in difficult conditions.

Mark and Ellen decided to compete in the Route de Rhum4, a tough race with a high profile which would make excellent practice for the Vendée Globe. Mark offered to make Ellen joint partner in his company Offshore Challenges which she accepted.

Kingfisher agreed to sponsor the project, enabling Ellen and Mark to charter Aqua Quorum, which had been previously used in the Vendée Globe. It was renamed Kingfisher.

The first few days of the race were hampered by storms and after 10 days, water began getting into Kingfisher. Despite this, Ellen and Kingfisher had won the race in their class. Despite the usual meagre coverage of sailing in the UK, the media were very interested in this achievement.

Subsequently, Ellen was awarded the French Jeune Espoir de la Voile award - 'Sailing's Young Hope'. This had never been won by a foreigner before. Kingfisher agreed to sponsor the team for another two years.

Ellen raced the new Kingfisher across the Atlantic in the Europe 1 New Man STAR race. Two other boats were demasted but Ellen came through to win in a new record, becoming additionally the youngest ever winner. Apparently, her average sleep for the race was only 4.2 hours a day.

On the starting line of the Vendée, there were 24 boats - more than had ever completed it before. The start was delayed due to bad weather and Ellen lost the first of many sails in bad seas. The Vendée Globe is a very dangerous race.

By 28 January, Ellen, in second place, was just 26 miles behind the race leader and catching. She even took the lead for a while, but lost it again. Ellen couldn't catch up because near the end of the race a forestay5 broke, which meant she couldn't go at full speed. The leader, Michel Desjoyeaux, finished with a 243-mile lead but Ellen still had a 400-mile gap between her and third place.

Ellen managed to escape the constant media attention after the race by sailing Foncia with Alain Gaultier and team in the Challenge Mondial Race, which they won by just a few minutes. This experience made Ellen decide to race more often with teams and in multihulls.

Ellen also attempted to win the Jules Verne trophy by trying to beat the record for the fastest circumnavigation of the world. Unfortunately, she and the team were unsuccessful. She was also runner- up in the 2002 BBC Sports Personality of the Year, though the award ultimately went to David Beckham. Compensation came in the form of an MBE.

In early 2005, Ellen completed her bid to break the record for the fastest person to sail single-handedly around the world, beating the previous record set by Frenchman Francis Joyon of 72 days, 22 hours, 54 minutes and 22 seconds. Joyon had smashed the previous record by a staggering 20 days, but Ellen finished the 27, 000 mile course in 71 days, and under 15 hours in her 75 foot trimaran, B&Q.

On her return, Ellen was greeted with huge crowds and the news that she was to be made a Dame! Keep up with Ellen's current plans on her website or at Team Ellen.

1The English three-penny coin, from the pre-decimalization era.2The Whitbread Race was, and is, open only to 60ft yachts.3An organisation which gives youngsters the opportunity to experience sailing and life on the water.4A trans-Atlantic sprint race, mostly in 60ft boats, from St Malo in France to Guadeloupe.5A rod which supports the mast.