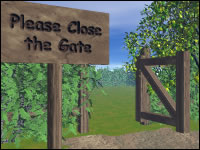 Welcome 1, About time that you dropped by. Close the gate, kick your shoes off and take a seat on the porch steps. If you're thirsty there's some beer cooling in the stream at your side. Just mind that the dogs don't push you in!

Why not pay Mostly Harmless a visit and see what's happening. You don't have to own or ride a bike to join and we bikers are a friendly lot!!

Probably because I was born in the 60's I've developed a broad taste in music. My collection starts with ABBA and ends with ZZTOP and stops at all points inbetween.
Rock music is my favourite. I'm currently in an Alice Cooper and AC/DC phase.
Solo artist? Kate Bush is my favourite (She captures all of my moods, including my pride in being English). My favourite band is currently an Aussie group called 'Machine Gun(Deleted for the sensors)' and a track called 'Motorcycle Mutha (Also deleted for the sensors)'. Commonly played music incudes Reggae, Rock, Independent, House, and classical. Best gigs I've been to? Nickelback and AC/DC, Steve Stienmans Vampire Rock is worth a viewing too!

Bikes. I have a total love of all things bike. I own two. A 1976 Honda 400Four-F/2 and a 1998 VFR800 FiW. I have a particular fondness for Hondas, but love Suzukis too (GT750 Water Buffalo in black please Santa). Bike meets and bike racing used to figure high on my list of pleasures until the dogs arrived. Although I've become too soft to camp at Rallies anymore.

I'm lucky enough to have family on the Isle of Man (lovely place) so my only role model was Joey Dunlop. This guy was THE best roadrider ever. There's many good ones (Fogarty, Nation, Rutter...) but only ever will there be one Joey!!

I've had the good fortune to race as a passenger on a formula one sidecar a few times. Even my bike can't get close to that as an adrenalin buzz.

It doesn't matter whether it's Speedway, Road, Track, Sand or any other style. All bike sport is good. It also doesn't matter what you ride. Be it scooter, sports, tourer or chop. There are too few of us to worry about each others choices. It's far more important to get people on to two wheels (or even three wheels).

VFRgal is my sanity. Which is just as well, otherwise there would be chaos. Henry and Diesel are our two white Boxers. I love most dogs, but Boxers (especially the whites) are my favourites. Most of my journal entries are about their antics. If you fancy a laugh, feel free to browse. Just mind all the other dross. I've been promising an article on white Boxers since I signed up. Trouble is I get too emotive about the subject and end up leaving it alone. In the meantime I concentrate on training them and me. They both have earned the Kennel Clubs Good Citizen gold awards plus Henry has British Institute Bronze and Diesel has Silver. I help out with dog training classes once a week. Up to 8 hours of all sorts of dogs. Heck of a laugh. who knows? Maybe one day I'll go and get some qualifications and take it up seriously.

As for age. Yes I have plenty of that! Apparently I am of an age when I should be entering my second childhood, but since I haven't finished with the first there may be trouble ahead.

I'm very pro european. However, until they kick out the faceless, penny pinching plebs that hold power, I will NEVER vote for a new constitution. I understand that I can be English and still be European. They don't understand that we are not fooled by the expense claims they make.