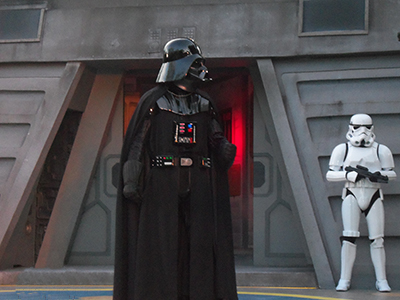 Why is there a statue of Darth Vader in Odessa? Why do Ukrainians consider this statue a civic improvement? And what makes it so useful? A quick story is in order.

In the beginning, there was Lenin (Vladimir Ilich Ulyanov), the founder of the USSR. During most of the 20th Century, statues of Lenin were as common in the territories of the USSR as statues of Christopher Columbus in the United States – and just as unwelcome to some people. When the Soviet Union was dismantled in the 1990s, so were most of the statues of Lenin, except in Russia and Belarus, where nostalgia was a thing. In the 2010s, Ukraine passed a law to 'decommunise' the city's public art.

Most people in Odessa, Ukraine, weren't nostalgic at all for the Soviet Union, and with good reason. Millions of Ukrainians died in the 1932-1933 famine known as the Holodomor. Ukraine and other countries recognise this famine as a man-made atrocity generated by Joseph Stalin in order to decimate the population of Ukraine and gain control of the rich grain-growing region. Ukraine isn't fond of statues of Stalin and Lenin.

One statue of Lenin escaped the purge, though, in an unusual way. Ukrainian sculptor Alexander Milov (b1979) had an idea. He converted the gypsum Lenin statue, which he reinforced and encased in titanium, into the image of a fictional dictator: Darth Vader from Star Wars. The result stands at 28 Stovpova Street in Odessa. The plaque under the majestic object reads: 'Darth Vader: To the Father of the Nation from your thankful children and stepchildren.'

Is this statue useful? It is. If you are near it, you get free internet. The head of Lord Vader emanates a powerful signal from The Force, turning the area into a wifi hotspot.