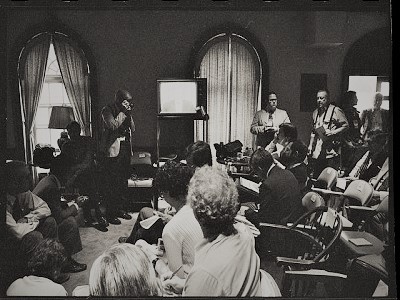 The library: bastion of intellectual freedom, or just a place to read the latest best seller? Also, librarians: pioneers in literature and education or politically dangerous radicals? Why not both? As Marion Stokes (1929-2012) might have said. This dedicated Philadelphian put the activism in archiving and anticipated the epidemic of Fake News by a good thirty years. Her work, which is now being digitised and made available on the Internet Archive, is a pretty exhaustive record of television news from 1979 to 2012.

Marion Stokes kept her long-term project a secret from all but family members and paid workers (who helped). Little did the neighbours in her posh apartment house on Rittenhouse Square know that history was being made there – or at least recorded.

There's a 218-page FBI file on Marion Butler Metelits, as she was known in the early 1960s. The FBI was monitoring her activities because she was a communist. She helped organise protests in favour of civil rights and women's rights. She also worked with the Fair Play for Cuba Committee1. The FBI wrote lots of reports on these people because they felt they were 'subversive' and 'unreliable'. Also, they had a lot of 'confidential informants' at those meetings and they had to pay them.

All this FBI activity contributed to the fact that when Marion Butler, who had been away with her husband, reapplied for her old job at the Free Library of Philadelphia, they turned her down. No communists need apply at the Free Library. So she became a public relations freelancer and later, public access television producer.

From 1967 to 1969, she co-produced a television show in Philadelphia. Called Input, the series involved panel discussions of serious issues of the day such as the roots of violence in society. (That's Marion Metelits in the centre of the panel in the video.) In this series, Marion worked with her future husband John S Stokes, Jr.

John S Stokes was a Philadelphia Quaker who converted to Catholicism in 1946. He, too, was an activist for social justice. His personal wealth helped finance his own charitable efforts as well as Marion's growing passion to archive modern US history through recording its media.

Marion Stokes began making her television archive on 4 November, 1979. That's when 52 US diplomats and citizens were taken hostage by militant students in the US embassy in Tehran. The students were protesting the policies of Iran's ruler, Shah Mohammed Reza Pahlavi. The outcome of the crisis affected the political fortunes of both Iran and the United States. Marion Stokes got it all on VHS tape. She didn't only tape news reports, though: entertainment programmes went into the mix, as well, particularly the ones she enjoyed, such as Star Trek, which she thought of as 'socialism in space'.

The usual recording procedure was to plug in a six-hour tape and let it run. Marion or a household member then remembered to switch tapes on schedule. This constricted the family's lives, as they would rush back from a restaurant or leave an event early in order to change a tape.

Marion had televisions running (without sound) in different rooms of her apartment. She herself could watch two of them (with sound on) at the same time – and understand both. In addition, she read eleven newspapers a day.

She archived the newspapers, too. Of course, she needed more storage space than could be provided in one apartment. She ended up with nine of them, as well as storage facilities.

Marion Stokes' son, Michael Metelits, has said in interviews that his mother could be a difficult person to be around. She had eccentric habits and could be single-minded in her opinions. While she and her husband John were extremely close, the couple had strained relationships with the children of both their previous marriages.

Before her death in 2012, Marion Stokes instructed her son to donate her vast collection to an archive that would agree to digitise it for the use of future researchers. The Internet Archive, founded by Brewster Kahle and headquartered in San Francisco, was eager to take on the project. Moving all the tapes cost $16,000 and required several container lorries.

What Can We Learn?

Why is Marion Stokes' collection so valuable? Most of the news programmes of the past are not otherwise archived. Future researchers can comb these records to find out what was known and said, when. They can follow events such as the Iran hostage crisis or the World Trade Center attack of 2001 as they unfolded. They can correct historical errors and analyse the rhetoric. Accurate reports can be used to combat Fake News in all its forms.

In addition to her television archive and newspaper collection, Marion Stokes also collected Macintosh computers – 192 of them, stored in a climate-controlled facility. After all, she and the Stokes family owed a portion of their vast wealth to her savvy investments in Apple technology. After her death, the entire collection was sold to an anonymous buyer on eBay.

A documentary film, Recorder: The Marion Stokes Project, tells the story with interviews and offers personal views from those who knew Marion Stokes.

The digitised portions of Marion Stokes' collection can be used freely at Internet Archive.

1Fans of JFK conspiracy theories will remember this committee as one for which Lee Harvey Oswald passed out literature, apparently because he'd 'infiltrated' the group.