When We Surveyed That Wondrous Cross 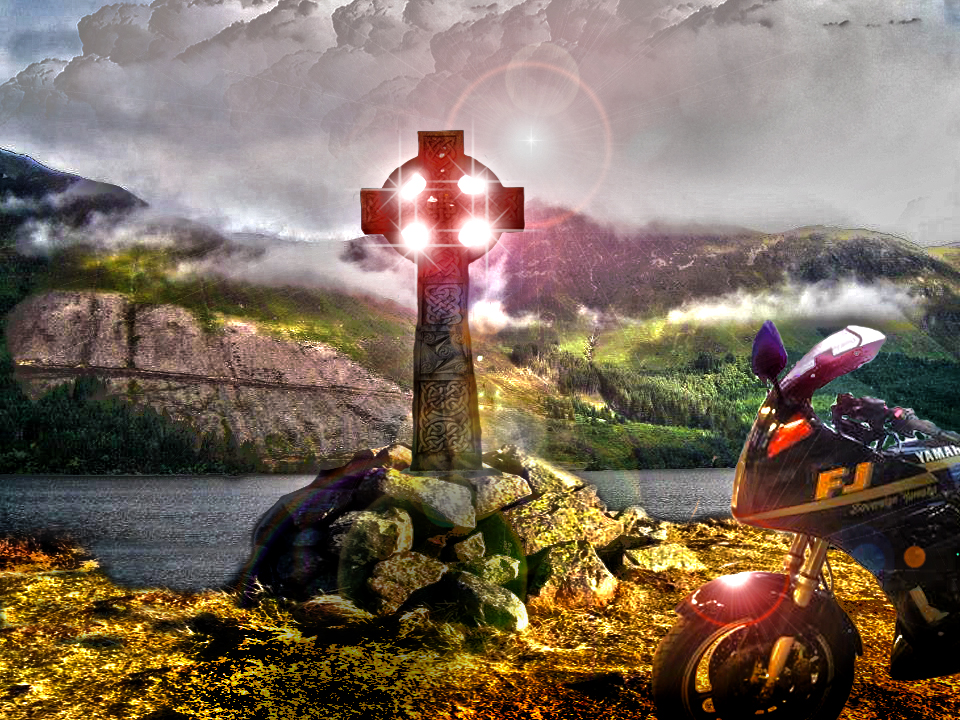 Getting hopelessly lost is nothing new to me, so on a motorcycle ride through the Highlands of Scotland 20-odd years ago, it was no surprise when my wife and I realised we had taken the wrong road and now found ourselves on little more than a dirt track winding up the side of a rather beautiful mountain.

The big Yamaha tourer coped well with the loose gravel and steep incline. Little chance of a u turn on the narrow track, so we happily plowed onwards and upwards, each bend giving stunning views.

We pulled up on a bit of flat land. Content to take in the views and have a stretch of saddle-stiff legs. I was a little miffed when I opened the panniers and realized I'd left my camera on charge in the hotel. The stunning views would have to be snapped another day - if I could ever find this gorgeous place again.

We strolled a short distance from the bike, sitting on the warm heather and bracken, enjoying the views and the silence.

To out left we noticed a small cairn, a group of rocks forming a base for a very old Celtic cross. Beautiful old thing, shape standing out against the clouds.

Moments later I really, really regretted not having a camera. The sun burst through the clouds, orange light splitting through the centre of the nimbus, four streaks of light radiating from the stone. Breathtakingly, wonderfully, beautiful.

Then the clouds closed and the stone was once more grey on white. Gorgeous still, but just an old cross.

We saddled up and continued our journey, stopping at a little village on the downward slope for a drink.

A village shop-cum-Post Office. The quaint old bell above the door jingling as we entered. I headed for the display of touristy postcards on a squeaky display, gently spinning them round, searching in vain for the picture I wanted.

The old lady behind the counter raised an eyebrow, asking if there was anything in particular we were after?

I explained the whole tale, being lost, stumbling over the old cross, the beautiful cloud burst of sunlight, and asked if by any chance she had a postcard, or a photo of the hill with the Celtic cross for us to buy. Such a beautiful scene, especially with no bloody camera!

She smiled and called over her shoulder into the back room.

A very distinguished elderly gentleman shuffled into the shop, giving us a warm smile.

We listened to the old guy for a while, humouring the Scot and his sense of humour, winding tourists up was obviously a way to pass the time up here!

I bought a single-use camera, thanked him for his tale, the doorbell tinkling as we left Gordon, shaking his head and smiling at our disbelief.

Retracing our steps, raindrops now splattering on the Yamaha's fairing. I hoped the sun would come back out, just one photo was all I needed.

Rounding the bend, killing the engine, we climbed off and walked through the soggy hillside to the place where we'd been, barely an hour before.

There, in the distance, the same cairn, slightly different, loose rocks ruining the sharp contour, moss growing on the stone. Weeds poking from its flat top.

The flat top that should've held that beautiful old cross.

Gordon's words echoed in my head,

'Aye lad, there was a cross up there, once, but you'll nae find a photograph of it. You see, lad, cameras were nae aboot when it stood, not yet invented when it was pulled down. But yer nae the first to see it, nor will yer he the last I'd say, count yerselves lucky to have seen it at all, I've been walking up there all my days and ne'er seen it! You may have the camera, of course, but you'll nae get a picture!'

The week after, I had my first tattoo. A Celtic cross, my wife opting for a beautiful sun. Together they still mean something wondrous to us, and always will.

We've been on several Scottish runs since, and no, I have never been able to find that road again. We live in hope!