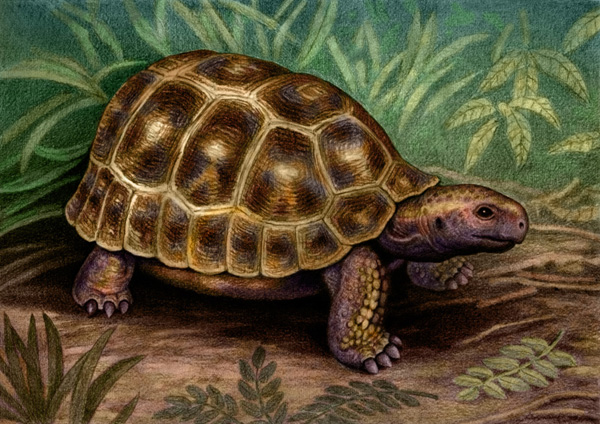 These illustrations were done for a physical and virtual exhibition on animals found in their Nebraska Diggings of about 35-30 million years ago, around the changeover from the Eocene to the Oligocene Periods. The time was one of transition: global climates became drier, forests gave way to grasslands, and ancient groups of mammal gave way to more modern lines.


This time, rather than a mammal, I show you a reptile – a tortoise, to be sure. At least, that's what we call them here in South Africa; in America, most folks would call this a turtle. What we call a turtle, is only a tortoise-like thing that lives partly or fully in the water; the land-living kind, we call a tortoise. And that's what this thing was. Its scientific name is Stylemys nebrascensis, or 'pillar tortoise/turtle from Nebraska'. It did indeed occur more widely, with fossils also found in South Dakota, New Mexico, and with close relatives outside the USA in Europe and Asia. It was very successful, therefore. In Nebraska, it's one of the most common fossils found. They were first discovered and named by Joseph Leidy in the 1850's. Most fossils consist of the shell; other bones are relatively rare, and there are even some of their eggs that have been preserved. 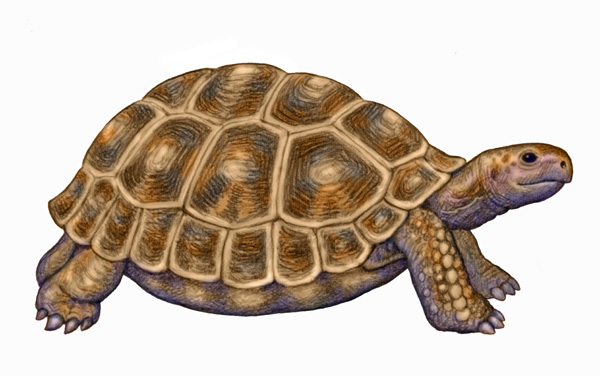 The shells of these tortoises varied from 5 cm/2" in length, to 1 m/39", making it quite a large tortoise. Apparently there was much variation in the shells, with some being high-domed (as in my illustration) while others had much flatter, lower shells. They were closely related to the present-day Gopher Tortoises, Gopherus-species. Like the modern ones, they lived in burrows, although their feet were not as specialized for digging. But it's likely their burrow-living behaviour that helped them to be so well-preserved. A tortoise dying in a burrow, will soon be buried as the burrow deteriorates and caves in around it, or gets filled with mud during a flood, thus neatly sealing it off from the outer world. Meanwhile, tortoises who die outside are far more likely to be eaten and for their bones to be scattered by the wind and the rain and all sorts of critters messing with them.


It is theorized that the flatter tortoises were more adapted to burrowing than the higher-shelled ones, similar to modern tortoises. Whatever the case, it furthermore seems that Stylemys-burrows had the additional benefit that other small to medium-sized animals also sheltered in them, sometimes even while the tortoises were present, and consequently were also much better preserved than the outside-living ones. These include oreodonts, strange, extinct pig-or-sheep-like herbivores, and nimravids, ancient cat-like carnivorans. You'll see both of these kinds of critter here soon! (That is,
iIf you haven't already seen them by exploring the virtual museum link given above.) Of course, some of those mammals might have dug their own burrows, or it might even be that some of the tortoises used burrows dug by other things, the way that in the present day here in Africa, a huge number of animals of many kinds shelter in burrows dug by Aardvarks.


Old Stylemys was so similar to modern tortoises that it would have been one of the most familiar things lumbering about Oligocene Nebraska. The climate back then would have been much more similar to subtropical Florida today, with lush forests featuring palms and a great variety of trees, interspersed with meandering rivers and floodplains. The tortoises would have been vegetarians of course, browsing on lush grass and herbage. Well-protected as they were, and with an absence of very large and strong predators, they likely didn't have much to fear. And while the genus eventually went extinct, it left descendants in the form of the gopher tortoises to this day found in Florida, the southwest USA, and Mexico.