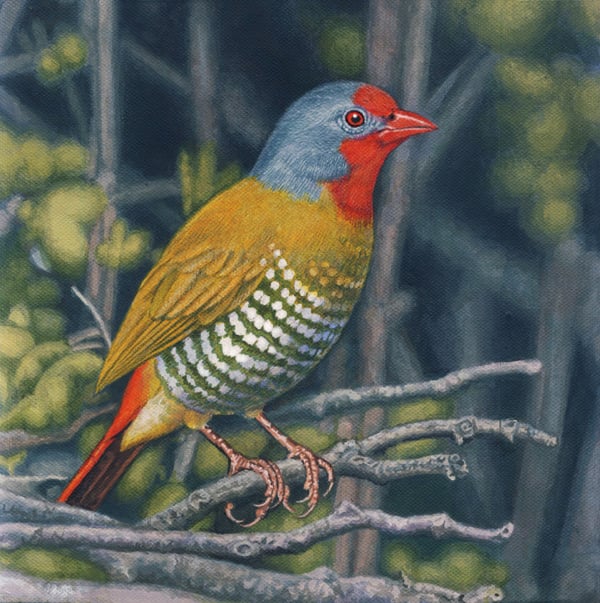 This week's subject is certainly one of South Africa's most charming bird species – a Green-Winged Pytilia, Pytilia melba! This one used to be named the Melba Finch and is still called that by many people. Strictly speaking it is not a finch, but a kind of Waxbill. I've featured many kinds of waxbill in this column already, since it's a favourite group of mine. They're all tiny birds, many very brightly coloured, and a huge diversity of them exist in Africa. South Africa is blessed with many of the prettiest kinds, including this one!


The Pytilias are a small genus of waxbill species only found in sub-Saharan Africa. Of the five currently recognized species, the Green-winged is the most widespread. It occurs over almost all of sub-Saharan Africa, only being absent from dry, treeless areas, high mountains, and dense forests. It inhabits countryside that has both trees and bushes (especially thorny ones), which it uses for shelter, and grasses, the seeds of which it feeds on. It will also eat small seeds from other plants, berries, and small insects. It has a fairly slender bill, and can't crack hard seeds, the way thicker-billed waxbills, finches, weavers and other seed eaters can.


The individual I picture here, is a male. Males have brighter colours, notably a patch of bright red on the throat and forehead. Females are also very pretty, but slightly duller: their heads and faces are grey, only their eyes and beaks being bright red. But they do have reddish tail feathers, and the pretty, delicate barring on their bellies. The male has somewhat neater spots on his breast, and a suffusion of golden-green on his upper breast as well.


In the wild, most of the time you will find a male and female green-winged pytilia foraging together. They relaxedly hop and fly about trees and shrubs, frequently dropping down to the ground, which is where they find most of the seeds they need. They give their presence away to birdwatchers with their soft, tinkling calls. They're not particularly shy or hard to see; in Polokwane, they're among the waxbill species that can most reliably be seen, though they're not nearly as numerous as the Blue Waxbill. They do not adapt well to human-created habitats, and are but rarely seen in suburban gardens. They do make use of artificial ponds such as are found on many farms, needing regular drinks of water, especially during the dry winter.


The bond between the male and female is very strong. Pytilias really stay together till death parts them. Males and females frequently sit huddled tight together, and preen each others. The male does a mating display for the female when it's breeding time: he fluffs up his head and belly feathers, and holds a feather or grass stem by the tip in his beak, waving it up and down to the female. This is a symbolic gesture indicating his willingness to gather nesting material. Pytilias breed mainly late in the rainy season, when most grasses have set seed. The nest is built of grass also, and placed in a bush or tree, well-protected by dense branches and thorns. The female lays four to five eggs. 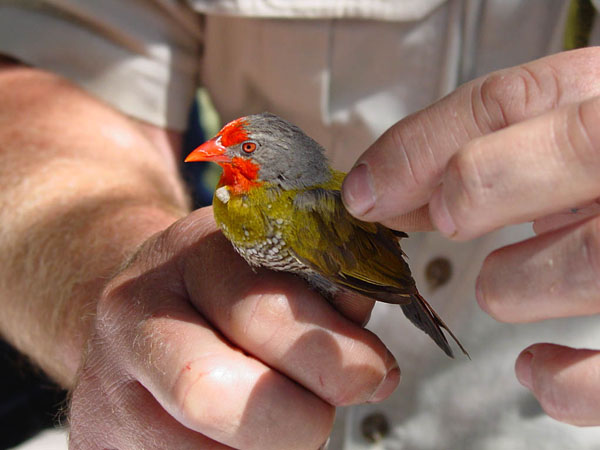 But many pytilia nests end up with more than just those eggs laid by the female. They're also targeted by another small, very pretty bird – a Paradise Whydah! Whydahs are parasites, they exploit other birds to raise their young. The paradise whydah makes exclusive use of green-winged pytilias as its hosts. Amazingly, they coordinate their breeding seasons with those of the pytilias to the degree where the female whydah is ready to lay her eggs at the same time, within a day or so, as the pytilia lays her eggs. The female whydah will sneak into a pytilia nest while the adults are absent, and lay her eggs. She usually removes as many of the original eggs as she lays eggs of her own. But there are always some pytilia eggs still remaining. The whydah chicks hatch along with the little pytilias and unlike some other parasitic birds, do not kill them or throw them out of the nest. What is most amazing, is that the whydah chicks resemble the pytilia chicks down to the tiniest details. Most specifically, these details are those of the insides of their mouths. Waxbill chicks in general have brightly coloured markings inside their mouths, which are targets that show their mother where she must put the food, a feature quite useful in the gloomy nest interior. In the case of the green-winged pytilia, the pattern is a black spot and two light blue spots on a pink background. The whydah chicks have evolved the exact same pattern! In addition to this, their begging calls are the same as those of the pytilia chicks, and they display the same begging behaviour, lowering their heads and turning them upside down, with their beaks held upwards so the parents can put the food in. The chicks feed and grow undetected along with the pytilias, keeping up the close resemblance until they fledge. Only as adults do the whydahs change into completely different feathers. But even then they retain elements of the calls of the pytilias, learnt from their 'foster parents'.


Having such a wide range, overall the green-winged pytilia can be considered a secure species. Its main threat in South Africa comes from it being collected as a cage bird. This is unfortunate. While very pretty, it doesn't really thrive in cages, and is considered to be a difficult and delicate species to keep. It is far better to find and enjoy them free in the wild.