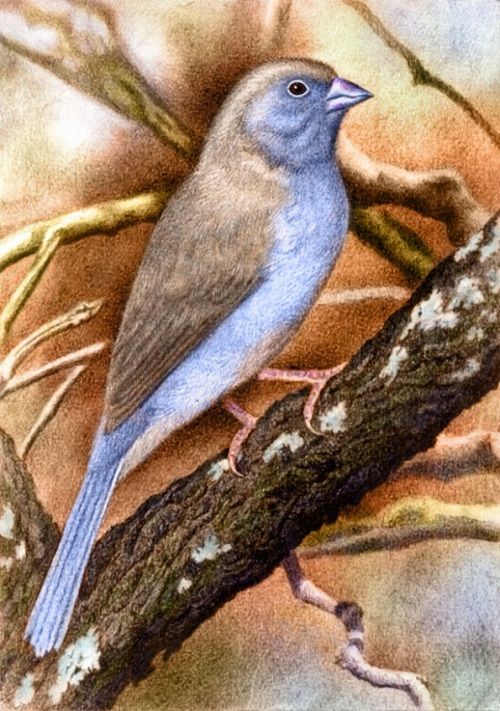 Today I bring you one of the sweetest and most delicately beautiful of all South Africa’s birds! This is a Blue Waxbill, Uraeginthus angolensis. The original drawing is much larger than life-size! It is indeed a tiny little thing, measuring only about 13cm/5" with its long tail included. This is a species I know very well: it is common in the environs of Polokwane, and abundant over much of South Africa. From here they occur northward, to central Tanzania and the southern DRC. They drink often and are therefore dependent on available surface water.


These lovely waxbills frequently enter my garden. The first hint to their presence is their soft, high-pitched whistles, which they seem to utter more or less all the time, as a way for members of the small flocks to stay in touch with each other. Once you've pinpointed the calls, you're sure to see them. Most of the time they're hopping about in the dense branches of a tree or bush, often in the shade, but they'll pop out into the open every now and then and you can get a good look at them. Sometimes they will feed on the ground in the open. They're definitely easier to see than some of our other waxbills. Blue waxbills most frequently occur in dry thorn-tree country, or in open woodland. They are seed-eaters, most of the time eating small grass seeds, but will on occasion also catch and eat the flying male and female termites that emerge with the onset of summer rains.

The waxbill family contains some of the prettiest birds in the world. Waxbills are given their name for the red bill of the common waxbill, Estrilda astrild, which looks as if it were made of red wax. Many other waxbills have colourful bills, but actually, their beauty lies in their plumage. They're not flamboyant like peacocks or birds of paradise, but their soft feathers often have very beautiful colours and patterns. The blue waxbill's coloration is very simple and elegant, its back being greyish-brown and its underparts and tail powder-blue. The male's colours are more intense than those of the female, but she is also very pretty. Waxbills occur in Africa, Asia and Australia, and most of the species are very beautiful. Several are popular as caged birds. I don't like the practice of keeping pretty little birds in cages … I much prefer seeing these lovelies out in the wild! I am fortunate in that Africa has a huge diversity of waxbills, and many species occur here in the environs of Polokwane. I hope to eventually feature all of them in Colours of Wildlife!

Something these waxbills do that is very strange, is building their nests in the same trees in which social wasps build their nests – indeed, if you see a waxbill nest, you are almost sure to see a wasp's nest not too far away. The funny thing is, we still don't know why they do this! Some people think that the wasps provide protection to the waxbills: many larger, predatory birds might see the wasp's nest and be afraid the wasps would sting them, if they tried raiding the waxbill's nest. But this has not yet been proven … apparently, waxbill nests close to wasp nests still get preyed upon. But another possibility is that the wasps' presence means the absence of much smaller predators: acacia ants! These ants will prey on wasps and waxbills – that is to say, the blind and helpless baby waxbills – equally, and if there are wasps in the tree then the waxbills know that there are not ants in the tree – so, it is safe to raise their babies there!


Blue waxbills breed any time of the year, but mostly in summer. When first pairing up, the male courts the female by performing a little dance in which he fluffs up his feathers, holds a grass stem in his mouth and waves it about in front of the female, while singing to her! If she likes him, she'll become his mate and remain with him for life. Together they'll build the nest, which is a rather untidy ball of grass. The entrance is at the side and leads to the inner chamber, which is lined with soft grass seed heads and feathers. The clutch is three to five eggs. The chicks hatch in 11 to 12 days, and fledge at the age of 17 to 21 days. It is possible that, like other waxbills, the chicks reach sexual maturity very rapidly, perhaps in as little as three months.