This incredible piece of writing was so, well, incredible that we had to share it with h2g2 at large. It's from the opening to that 1895 cult scifi favourite Etidorhpa. It's a 'hollow Earth' story. It went into two printings in two years. It was translated into seven languages. Innocent baby girls got named Etidorhpa, which is Aphrodite spelled backwards. That's not why we share this.

We share this because the author spent two whole pages moaning about the weather in Cincinnati in November. He could have won the Bulwer Lytton Prize, hands down.

It Was a Dark and Stormy Night 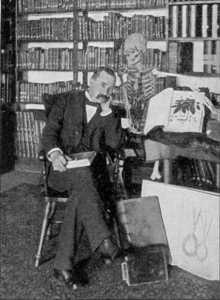 More than thirty years ago occurred the first of the series of remarkable events I am about to relate. The exact date I can not recall; but it was in November, and, to those familiar with November weather in the Ohio Valley, it is hardly necessary to state that the month is one of possibilities. That is to say, it is liable to bring every variety of weather, from the delicious, dreamy Indian summer days that linger late in the fall, to a combination of rain, hail, snow, sleet, – in short, atmospheric conditions sufficiently aggravating to develop a suicidal mania in any one the least susceptible to such influences. While the general character of the month is much the same the country over, – showing dull grey tones of sky, abundant rains that penetrate man as they do the earth ; cold, shifting winds, that search the ver}' marrow, – it is always safe to count more or less upon the probability of the unexpected throughout the month.

The particular day which ushered in the event about to be chronicled, was one of these possible heterogeneous days presenting a combination of sunshine, shower, and snow, with winds that rang all the changes from balmy to blustery, a morning air of caloric and an evening of numbing cold. The early morning started fair and sunny ; later came light showers suddenly switched by shifting winds into blinding sleet, until the middle of the afternoon found the four winds and all the elements commingled in one wild orgy with clashing and roaring as of a great organ with all the stops out, and all the storm-fiends dancing over the keyboards ! Nightfall brought some semblance of order to the sounding chaos, but still kept up the wild music of a typical November day, with every accompaniment of bleakness, gloom, and desolation.

Thousands of chimneys, exhaling murky clouds of bituminous soot all day, had covered the city with the proverbial pall which the winds in their sport had shifted hither and yon, but as, thoroughly tired out, they subsided into silence, the smoky mesh suddenly settled over the houses and into the streets, taking possession of the city and contributing to the melancholy wretchedness of such of the inhabitants as had to be out of doors. Through this smoke the red sun when visible had dragged his downward course in manifest discouragement, and the hastening twilight soon gave place to the blackness of darkness. Night reigned supreme.

Thirty years ago electric lighting was not in vogue, and the system of street lamps was far less complete than at present, although the gas burned in them may not have been any worse. The lamps were much fewer and farther between, and the light which they emitted had a feeble, sickly aspect, and did not reach any distance into the moist and murky atmosphere. And so the night was dismal enough, and the few people upon the street were visible only as they passed directly beneath the lamps, or in front of lighted windows; seeming at other times like moving
shadows against a black ground.