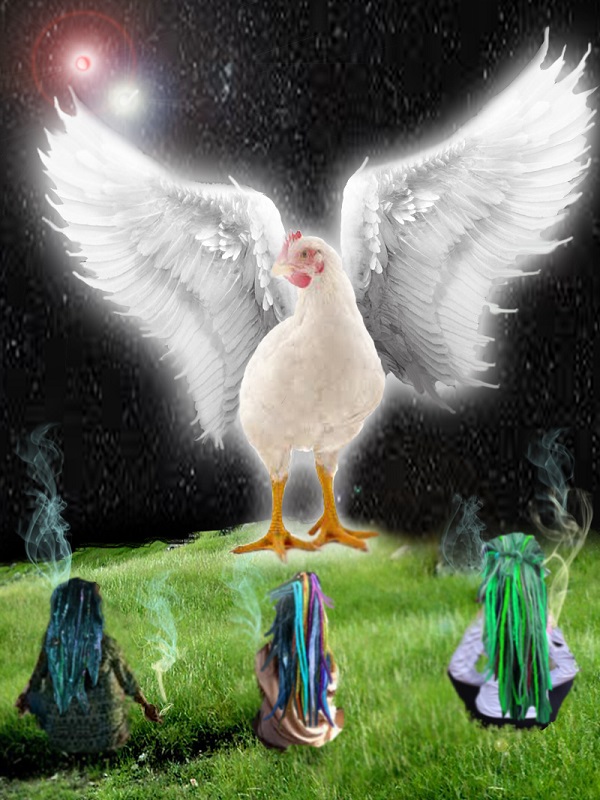 Eight hundred years. A long wait by Earth time, a mere blink in the life of the Spiral Architects.

Tonight the planets would align, a new star to follow, a new beginning in the Universe (or this dull part of it anyway).

On a hilltop, three potheads sat, watching their phones by night.

From the southwest, a brilliant double star illuminated the sunset.

'Whoa dudes! You see that plane, freaky or what?'

Her two companions glanced up through the smoke and agreed that the bright plane lights were indeed way freaky.

Their night, however, was about to get a hell of a lot freakier.

Out of the skunk haze appeared a figure, white and rather feathery, huge wings unfolding, as the Starlight seemed to make the figure glow.

'Fear not' said she, (for mighty dreads had slightly obscured their eyes), 'Glad tidings of great joy I bring.. .'

Claire pushed back her pink and green dreadlocks, and squinted at the glowing figure.

The stoners leant in closer to the glowing figure,

Debbie asked (quite seriously) if anyone spoke chicken, and passed the spliff around, holding it out to the Archangel, and making soothing clucking noises.

What a bloody waste of a tea break!

The Spiral Architect screwed up the plans, throwing the future salvation of humankind into a nearby black hole, and went off to do something more worthwhile instead.

Constable Jonner hit the blues and waited til the motorcycle had pulled over and the rider killed the engine.

He watched while the two leather clad bikers climbed rather awkwardly from the heavily laden Yamaha and stood waiting for him to get out of the police car.

Constable Jonner climbed out of the Vauxhall and approached the bikers, a little surprised (and to be honest, a little relieved) as their helmets were removed and he saw they were both girls.

He explained the reason for the stop and asked for the owner's details and the reason they were riding around town at three a.m.

'It's my bike, Officer, registered to me, Joanne Elizabeth Carpenter. We're trying to find a hotel open, I'm taking Marie here to the maternity hospital tomorrow, er today, bloody nightmare with all these Covid restrictions and the Government telling us to not travel – unless it's for medical care, obviously!'

Lee looked over to the pillion passenger, noticing the rather obvious bump for the first time.

'We tried the Premier Inn, but there's no room, with everyone trying to get home for Christmas, just riding around looking for somewhere for her to get a little rest. Sorry about the number plate, I'll get it sorted.'

'Okay, miss, ' Lee smiled his understanding, 'Tis a bloody nightmare all over at the mo. Look, if you just need a rest stop, there's a Pret a Manger open two streets down on the left, get a butty and a coffee and let her rest. Are you meeting the father here? I can get you the postcode for him if he's on the way?'

'There's no father, well, not in that sense. Our baby' She let the words sink in, 'Our baby, (boy actually), our little miracle, is the result of modern science, a lot of love, and a little help from a generous, unknown, donor.'

Lee thought things were getting a little personal and let the bikers go with a friendly warning to get the plate sorted ASAP.

Minutes later, Marie and Jo-Beth sat eating sandwiches as a new star shone above the 'Manger, waiting for the morning and the birth of the Son of GUD.

Minutes after that, the Spiral Architect thought the whole plan was getting too daft, and decided to give up, and have a game of Kerplunk instead.

The Archangel spread divine wings, filling the strangely shaped room, and had another look at the Divine Scheme of All Things.

It skipped through the usual DSAT yadder yadder – "each 800 years, precisely, the planets line up, rather quite nicely" – (It always dismayed Itself when It realized the Spiral Architect was a crap poet) – briefly shook Its head sadly at the "NO SMITING" (I mean it, not even a single firstborn this time!) clause, and looked for any Divine loophole that could get It out of this mess.

The unconscious human didn't care, he had immediately, and very bravely, and very powerfully, in a very macho way, fainted when the rather frighteningly large chicken had appeared at the monthly U. S. / U. K. / Russian Kerplunk session.

(Just wait til the CIA were told poor old Vlad was a wussy Alektorophobic!)

The other two muppets dramatically played with outrageously bad hairdos and shouted gobbledygook at each other.

Eton had totally failed to equip the PM with the proper etiquette when dealing with rather frighteningly large poultry.

PoTUS merely put on a jaunty red cap, squiggled a rather hasty Executive Order about building a great, American built, chicken-wire fence around the White House, sat at a rather comically tiny desk, and Tweeted that he 'knew chickens, great people, expert in chickens, people ask me how I'm soooo GREAT at chickeny business! Giant stars? Fake. Fake news people! Probably the Koreans, or the Chineeeese or the Finns! They'll pay, trust me, I know, and pay bad, very bigly.'

The Archangel clucked in a terrifyingly angry way, 'Three Wise Men my bloody Oviduct!', decided It would take Its chances with the Spiral Architect, and set about a good old-fashioned smiting sesh.

At last, some actual Joy to the World!