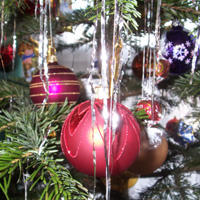 After Thanksgiving there was a nip in the air most mornings. A group of four carolers – all of them wearing masks – made the rounds, singing at nursing homes and in front of Town Hall and the Mallwart store. Once a week they sang in front of the shops at the town's only shopping plaza. This was not an upscale plaza – a Sandwich Heaven, a laundromat, and a Dollar emporium were the anchor stores – but the carolers were welcomed just the same. People even gave them money. Everyone had something to smile about, not bad in times of such worry.

Driving around town at night was a pleasure as residents put strings of colored lights along their hedges and on whatever evergreen trees they had.

The Town's annual Christmas tree lighting was held at Town Hall, but without spectators. Instead it was filmed, and broadcast to anyone who had the local access cable channel, or could get Youtube on their computer. Or, folks could just drive by Town Hall.

The local cafes had special Christmas menus, and most stores were well-decorated. Still, it was sad to see how much of the usual Christmas cheer was missing. Office Christmas parties were virtual. You could still go to one of the local bars and enjoy a Christmas drink – the employees wore santa suits and hats.

Most local churches had suspended live services, but parishioners still worked to buy and wrap presents for poor children. And, there were virtual services, complete with an organ and masked choirs. On the Sunday before Christmas, an eight-voice masked choir sang 'The
Messiah' in the Anything Goes Church, and this was filmed and broadcast live to people's computers.

And when Christmas Day came at last, people generally stopped worrying about what they were missing, but tried to enjoy what they had. And, surprisingly, this worked more often than not.

A resilient Merry Christmas to all those who read this. Christmas can be what you make of it. Always has been, and always will be.