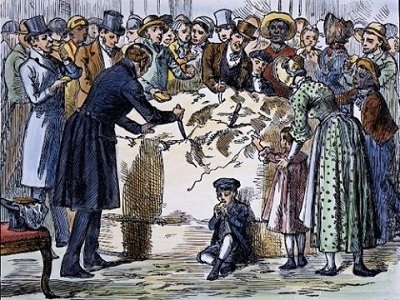 Let's talk about the first time they had to fumigate the White House1.

It wasn't a political act: the new incumbent wasn't making a snide reference to his predecessor's policies. It was because of the cheese. To find out the truth about cheese and the White House, we have to start our investigations with Thomas Jefferson.

We wish to prove the love we bear to our President not by words alone, but in deed and in truth. With this Address we send you a Chees[e]…

– From the Committee of Cheshire, Massachusetts, [30 December 1801], in the National Archives.

To begin with, there was a cheese, or as the Committee of Cheshire, Massachusetts spelled it, 'a Chees'. This was a cheddar cheese, still the most popular type in North America. It 'was made July 20. 1801, and on the 20th of August it weighed 1235 lb2.' Dairy farmers in Cheshire had contributed the milk – or rather, their patriotic cows had, 900 of them – and the giant cheese, 6 feet (2 meters) in diameter, was made in a converted cider press. The Committee, led by a Baptist elder named John Leland, were very proud of the fact that this cheese was made by 100% free labour. No slaves were coerced in the making of this product. The irony couldn't have been lost on the slave-holding Jefferson.

There was a lot of discussion of the 'Mammoth Cheese', as it was called. Political opponents of the president were scornful. Jefferson, mindful of the impropriety of accepting gifts while in office, paid Cheshire $200 for the cheese. After the cheese was formally presented in the East Room of the White House (and everybody ate some), the cheesy comestible took up residence there – for the rest of Jefferson's time in office. It was a really big cheese.

People were offered cheese on Independence Day, 1802 and 1803. It was served in Boston and North Carolina. A congressman noted that some of the cheese was on the White House table on New Year's Day, 1805. Remember: it gets hot in Washington, DC during the summer. By the end of the Jefferson administration, it must be said that this cheese was more than mouldy: it had worms in it. Also, it was ripe. It smelled.

No one is sure exactly what happened to the rest of the Mammoth Cheese. Some accounts claim it was dumped in the Potomac River. If so, it must have been too far gone by then to have fed to the hogs. But the Cheshire cheesemakers had made their point: free republicans, working under a new system of government, were capable of remarkable agricultural achievements. The cheese was an expression of national pride to them.

When something is done once, it establishes a precedent. When it's done twice, we're on our way to a tradition. There was to be more cheese.

Andrew Jackson's Politics Weren't the Only Things That Smelled

The air was redolent of cheese, the carpet was slippery with cheese, and nothing else was talked about at Washington that day. Even the scandal about the wife of the President's Secretary of War was forgotten in the tumultuous jubilation of that great occasion.

Andrew Jackson was president from 1829 to 1837. He was a controversial president, the first from 'the frontier'. Jackson, also called 'Old Hickory' because of his habit of fighting men he disagreed with using his hickory cane, was abrasive, combative, and not as educated as his predecessors, most of whom were Founders. Jackson's instigation of the Trail of Tears haunts his legacy today. In his own time, congressman and fellow Tennessean Davy Crockett despised him for the forced expulsion of Native Americans as well as for his monetary policies. Jackson's proponents were vociferous. In other words, Jackson was a very polarising president. His supporters thought he represented the values the 'common man' stood for. His opponents thought he and his supporters were ignoramuses.

Jackson's supporters gave him a really big cheese. It weighed 1400 pounds and came from New York state. Jackson was clever enough to invite people to share the cheese: the whole thing was eaten in two hours on 22 February, 1837, at a public reception. However, the stink of the cheese got into everything: the next president, Martin Van Buren, had to have the official residence scrubbed down to get rid of the smell.

Obama Watches Television and Gets an Idea

The whole cheese business might have been left as a footnote in history if it hadn't been for Aaron Sorkin, the television writer and creator of the series The West Wing. In the series, which portrays a fictional presidency, President Josiah Bartlett is inspired by the story of Jackson's giant cheese to institute Big Block of Cheese Day. Once a year, he invites the public to come and discuss issues of importance to them. During the run of the series, White House staffers are required to meet the public on such issues as wolf migration, the possible existence of UFOs, and the unfairness of Mercator projection maps.

The West Wing finished its run in 2006. Some observers feel that the show so closely followed US politics that it accurately predicted the outcome of the 2008 election. Obviously, the candidates themselves had seen the show. President Barack Obama even instituted his own Big Block of Cheese Day, with appropriately cheesy puns.

The cheese industry was not notably supportive of the Trump administration. In fact, many dairy interests expressed the belief that the president's tariff policies hurt milk producers. Nobody sent him any cheese. In 2020, the question remained: would the incoming Biden administration do better? And would the new president bring back Big Block of Cheese Day? Will he be gifted with cheese?

At least, the Biden White House has plenty of refrigerators.

1The official residence of the president of the United States of America.2lb=pounds. They weren't metric, although Jefferson was in favour of the system. In fact, Jefferson had sent to France for a kilogram weight. French scientist Joseph Dombey was unfortunately waylaid by pirates in the Caribbean, and the weight never reached the president.