Stalking the Wild Turkey: Then and Now 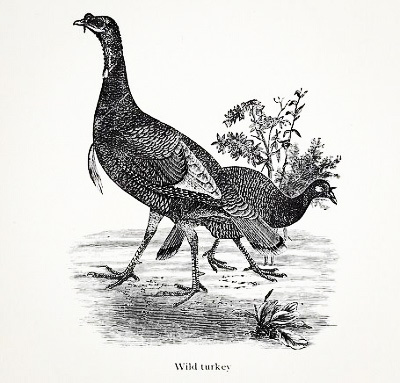 The most remarkable bird in America was1 the wild turkey. It is the original turkey, and is the stock from which the tame turkeys sprung. In the wild state it was to be found in the wooded lands east of the Rocky Mountains. In pioneer times it was called gobbler or Bubly Jock by the whites2, and Oo-coo-coo by the Indians3.

Our pioneer hunters could imitate the gobbling of a turkey4, and this deceptive ruse was greatly practised to excite the curiosity and bring the bird within shooting distance. The last wild turkey in Jefferson County was killed in the seventies near the town of False Creek5.

To obtain a turkey roast when needed, the pioneer sometimes built in the woods a pen of round logs and covered it with brush. Whole flocks of turkeys were sometimes caught in these pens, built in this wise:

First, a narrow ditch, about six feet long and two feet deep, was dug. Over this trench the pen was built, leaving a few feet of the channel outside of the enclosure. The end of the part of the trench enclosed was usually about the middle of the pen. Over the ditch, near the wall of the pen, boards were laid. The pen was made tight enough to hold a turkey and covered with poles. The corn was scattered about on the inside, and the ditch outside baited with the same grain. Sometimes straw was also scattered about in the pen. Then the trap was ready for its victims. The turkeys came to the pen, began to pick up the corn, and followed the trench within. When they had eaten enough, the birds tried to get out by walking around the pen, looking up all the time. They would cross the ditch on the boards, and never think of going to the opening in the ground at the centre of the pen. When the hunter found his game he had only to crawl into the pen through the trench and kill the birds6.

In the fall turkeys became very fat, and gobblers were sometimes captured for Christmas in this way weighing over twenty pounds.

From A Pioneer Outline History of Northwestern Pennsylvania by WJ McKnight, 1905.

1Still is. Those people in the 1890s just thought they wiped them out. They're alive and well: the Editor saw some just the other week in Hoggetts' horse pasture. Last year, a flying turkey took Farmer Hoggett's sideview mirror off his pickup.2Yes, those 'whites' came mostly from Scotland and Northern Ireland.3We assume he means the Lenape, who hunted around here. Oo-coo-coo is a better name for a wild turkey than Bubly Jock, anyway. It's, er, evocative.4If you wonder why these people who wrote histories in the 1890s always seemed to be patronising the 'pioneer ancestors', keep in mind that those pioneer ancestors were often their grandparents or great-grandparents. They felt both proud of Grandpa and embarrassed by him, which is not unusual when societies change rapidly. The Editor, whose granddaddy was a dirt farmer and chewed twist tobacco, has seen this psychological phenomenon in action.5See note 1. They only thought they shot all the turkeys. The turkeys learned to hide. Also, the Wildlife Commission is interested in increasing their numbers. So are the turkey hunters, like this pair from Lancaster, PA, who are still practising the 'deceptive ruse', although the turkeys seem to have got smarter:

Every time Jim Hamill and I moved to a new spot in the woods on Texter Mountain in West Cocalico Township last Wednesday morning, the gobbler would answer our entreaties with a thunderous gobble.

But after 90 minutes, it became clear that the amorous turkey, while interested in hooking up with the hens we pretended to be, was insisting we come to him. He wasn't about to strut over to us.
'Strutting the comeback of wild turkeys here', Ad Crable, Lancaster Online

6This is now illegal. I quote the Pennsylvania Game Commission: 'Aside from a few, very narrow exceptions, hunting through the use of bait is illegal in Pennsylvania.' You have been told. (This goes double if the 'bait' attracts elk or bears.)