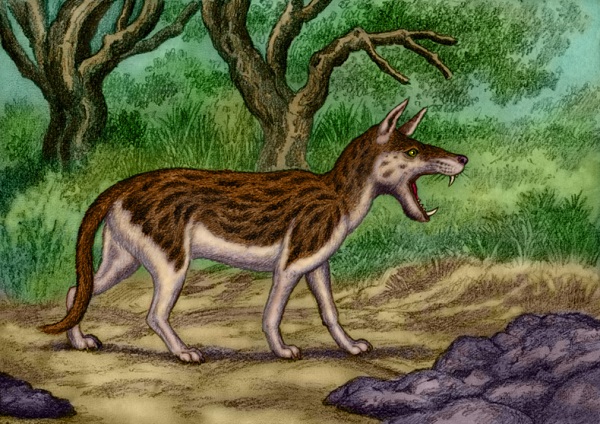 Still with extinct critters, today we look at one whose extinction is not the fault of us humans. This is Hyaenodon horridus, or the horrid hyena-tooth. Hyaenodon was an extremely successful predator in its time – which time was the Late Eocene to the Early Miocene, about 42-16 million years ago. That's about 26 million years! Certainly longer than we've been around. Hyaenodons flourished over a huge region: Europe, Asia, Africa and North America. Hyaenodon horridus, the type species, lived in North America, 37-32 million years ago. It was about the size of a big dog, but had a proportionally larger skull. Many other species of Hyaenodon existed, from the size of a cat, to the size of a bear!


The hyaenodonts were a group of predators that looked much like our present-day carnivorans, but they were neither ancestral, nor closely related to them. They're sometimes combined with somewhat cat-like old critters like Oxyaena and Patriofelis into a group called the Creodonta or the 'flesh-teeth'. These were ancient mammals, arising shortly after the extinction of the non-avian dinosaurs. They had efficient meat-shearing cheek teeth, together with stabbing canines, some even mirroring the later sabre-toothed cats. They had smaller brains than modern carnivorans, though, and were perhaps not as strong, agile, fast and enduring. Nevertheless, they were the dominant predators on Earth for a very long time. Sadly, they too eventually came to the end of their line, going extinct and leaving no descendants. Some scientists think that their closest living relatives are the pangolins! The modern carnivorans arose independently of them; indeed in mimicking so closely the forms of the earlier creodonts, they can be considered a remarkable case of convergent evolution. Creodonts, especially the later ones, were apparently hyper-carnivores, meaning they were pretty much exclusive meat-eaters, unable to deal with plant food.


Among the creodonts, the hyaenodons were mostly dog, fox and wolf-like types. Despite their name, they likely were not very much like hyenas. Their dentition shows that they were active hunters, and not particularly adapted for bone crushing. Their skeletons show them to have been able to run fast, though not as fast as the fastest modern predators. They walked on their toes, five per foot. Their tails were quite long. Their long and strong skulls were their primary weapons; they likely chased their prey or hid in ambush to surprise it, dispatching it with a powerful bite to the head or neck. Their bite strength was made possible by very strong muscles attached to a crest on their skulls; they also had powerful necks. A related genus, Hyainailuros or 'hyena-cat', might have been more of a bone-crusher.


Since there were many species of Hyaenodon, with a diversity of body forms, and occurring in different habitats, they likely used a range of different hunting strategies. Some might have hunted solitarily, while others might have cooperated with each other in packs. They likely preyed on medium-sized to large mammals of the time, which included some primitive forms such as oreodonts, as well as early members or ancestors of modern groups such as horses, camels and deer. There are even signs that they preyed on other carnivores, such as the cat-like nimravid Dinictis. A peculiar feature of hyaenodons was that their adult teeth took very long to fully emerge, and it might have been that they therefore had very long adolescent periods during which time they may have depended on the help of their parents.


In their own time, hyaenodonts competed with other early meat-eating types such as the mesonychids, which I hope to soon feature here, and the entelodonts or hell-pigs. But their real challenge must have been from the first true carnivorans, the dogs/foxes/wolves of the Canidae, the cats of the Felidae, and the bears of the Ursidae. Early bears and dogs were similar, and indeed there was an intermediate family called the bear-dogs, the Amphicyonidae, which included big, powerful and fast species that must have been stiff competition for the hyaenodonts. As it is, the hyaenodonts dwindled in the Oligocene, and the last ones died out in the Miocene, leaving the stage open for the modern types to multiply and diversify.