The Pangolin – A Scaly Mammal 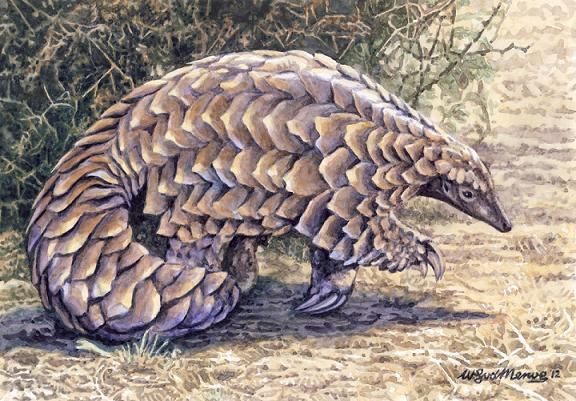 Today’s picture is of a ground pangolin, Manis temminckii, one of eight living species of pangolin. The name comes from the Malay word ‘pengguling’, which means ‘something that rolls up’. This refers to the pangolin’s defense mechanism of rolling itself up into a ball, presenting an impenetrable barrier of hard scales to a predator.


Although pangolins are scaly, they are mammals and not reptiles. Their scales are not exactly the same as reptile scales, but similar to the scales covering the tails of mice and rats. But pangolins are not rodents either. They are so distantly related to other mammals that they are given an order of their own, the Pholidota. Not many prehistoric pangolins are known, but the 'Messel Pit in Germany' yielded two ancient fossils, Eomanis and Eurotamandua which are possible pangolin ancestors that lived between 40 and 50 million years ago. A few more recent fossils that are definitely pangolins are known from Europe as well; even though none occur there any more, that’s where the group might have originated.


The ground pangolin I illustrate here is the only pangolin species that occurs in South Africa. They are rare and secretive and I’ve never seen one yet. Three more species occur in Africa, the giant pangolin which is closely related to this one, and two tree pangolins. The other four species occur in Southeast Asia. Pangolins can be identified at once by their pine-cone like scaly appearance. The scales are all over their heads, backs, sides and both surfaces of the tail, but their bellies, faces and the inner sides of their limbs are naked or covered in hair. Their heads are small and tubular, their eyes small but surrounded by thick eyelids, and their ears are simple openings in their skulls. 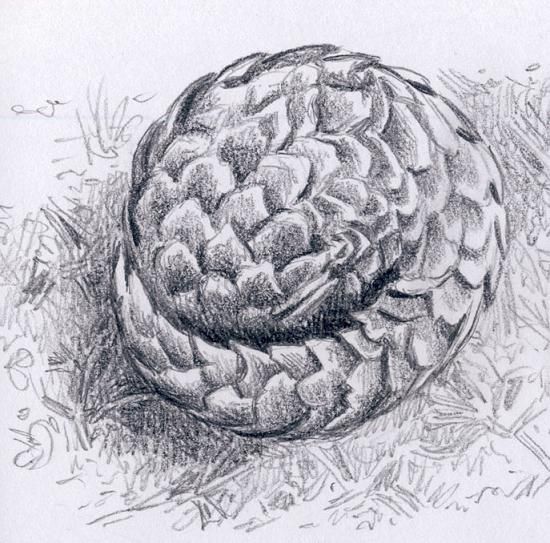 Don’t let the pangolin’s scaly appearance fool you into thinking it is primitive in any way! These mammals are highly specialized and well adapted to their environment and lifestyle. They are dedicated eaters of ants and termites. To open up their nests they use the long, curved claws of their forelimbs. To keep these sharp, they curl them into their palms while they walk, or keep the forelimbs off the ground altogether, walking or even running on the hind limbs only while balancing the body with the long tail! They are the only mammals apart from ourselves to routinely walk bipedally like this. The ground pangolins have short, club-like hind legs and leave footprints reminiscent of small elephants.


To deal with their ant and termite prey, pangolins use their long, thin tongues. These tongues are absurdly long, as long as the head and body put together. When not in use the tongue is folded back into a pouch extending down into the chest and belly. Muscles used to extend the tongue attach to a long prong that goes all the way back to the rear of the pangolin’s abdominal cavity! This prong is formed from highly modified cartilaginous ribs that have become detached from the vertebra and are only loosely linked to the rest of the ribcage. To complete this weaponry pangolins have huge salivary glands in their chests that coat the entire tongue with sticky saliva. They can rapidly flick the tongue out and in as they feed, licking up ants or termites in their hundreds.


Because they use their tongues for feeding, pangolins don’t have any teeth. Their skulls are small and their jaws very weak, the lower jaw being nothing more than thin slivers of bone. Since mammalian teeth have traditionally provided the best clues for classifying them, it has been difficult to determine where pangolins fit in. The specialization of the rest of their anatomy didn’t make things any easier. A group that seems like it might be related to the pangolins are the Edentates of South America. They include sloths, armadillos and anteaters. The last two, especially, do resemble pangolins in some respects … the armadillos in having armour, the anteaters in their feeding habits. Nevertheless, it seems that pangolins are not closely related to them, the similarities being due to convergent evolution, where unrelated species come to resemble one another due to having similar lifestyles. Today scientists are starting to analyze the genes of animals to understand their relationships. This is the best way because the genes are the closest thing we have to a complete record of the changes creatures underwent over the course of evolution. Genetic evidence indicates that the pangolins might be most closely related to the Carnivora, the group that includes dogs, cats, bears, mongooses, weasels, and many other predatory mammals.


Another body part that is highly specialized is the pangolin’s tail. It is muscular and, in the tree living pangolins, prehensile. The long-tailed tree pangolin of Africa has 47 tail vertebrae, more than any other living mammal. These tails with their scaly coverings are used as fifth limbs, wrapped around the trunks and branches with a firm grip while the pangolin climbs. In the ground pangolins, the tail is used for balance while walking, but also, when curled up into a ball, they can swipe their tails at predators, cutting them with the sharp edges of the scales.

The ground pangolin is the most arid-adapted species. All other African pangolins live in rainforests. This is partly because they need access to lots of water to replenish their saliva! The ground pangolin somehow manages to conserve water well enough to allow it to live in dry, open savannah and even semi-desert regions like the Kalahari. This pangolin is the second largest species, reaching a total length of more than a metre/yard and a bodyweight of 18 kg/40 lbs. (The giant pangolin can reach twice this weight.) The ground pangolin ranges from South Africa, through central and East Africa, and as far north as the southern Sudan. Its diet is primarily ants, termites being secondary, and other insects like dung beetle larvae only rarely. It usually ingests a bit of earth and sand along with its insect prey. The sand in its muscular stomach might even help to grind up the insects, since it doesn’t chew.


Although it is an expert digger, this pangolin will typically make use of a natural cavity or an abandoned burrow of some other creature such as an aardvark. They rest up here during the day, and move out to feed at night. Subadult pangolins can be active during the daytime, though. A strange behavior reminiscent of rhinos and other much larger mammals is that they will wallow in mud or even dung. Sometimes when it rains a pangolin will move around in circles to scrape out a shallow depression that quickly fills with water in which it can wallow. They use urine to mark their territories, lifting their legs against trees or rocks like dogs. Pangolins mostly live alone, but males and females sometimes feed together or share a burrow. In March they mate, doing it side by side with the male holding his tail under the female’s. After about 135 days the single baby is born. At birth its scales are soft but they harden up as it matures. It suckles for a month, and then the female starts moving it around, carrying it on her back as she seeks out new dens. If a predator threatens them, the baby will shelter at the female’s belly as she wraps herself around it.


Pangolins are generally threatened by humans who use their scales and other body parts for medicinal uses. Apart from that they are widespread and adaptable, and with adequate conservation measures their future should be secure.