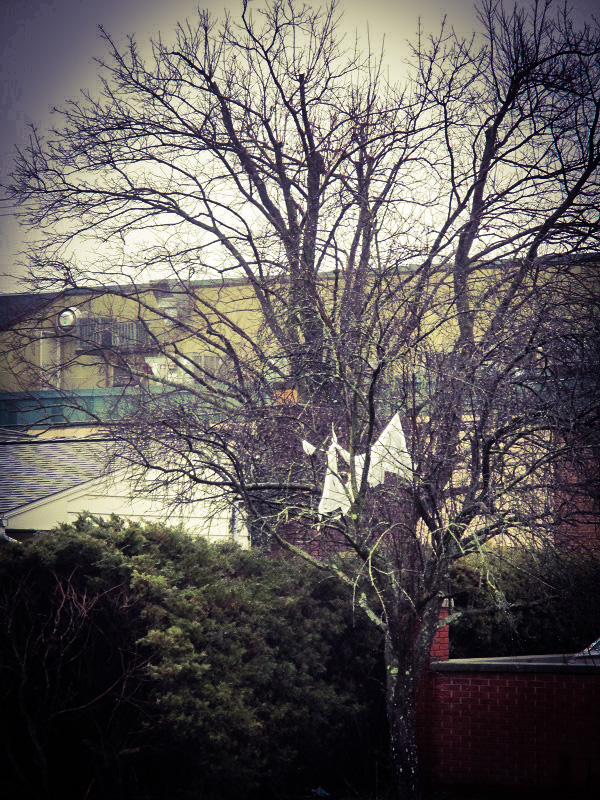 That? Oh, that's the 'tree ghost', according to Elektra. Here's what she said to me when I hadn't had coffee yet:

I've been trying to get rid of that ghost, but it won't go away.

'Wha-?' I replied blearily, then looked out the window, to where she was pointing. 'Oh,' I said. A recent windstorm had blown this plastic ectoplasm into the old plum tree. It will probably have to dislodge it, too, because we can't reach. Farmer Hoggett's been dealing with a shoulder injury, and I am not going to ask him to haul a ladder into town. That ghost's not hurting anything. It can stay there and be a Decorative Detail.

The 'ghost' reference, according to Elektra, was because of my recent excessive binge-watching of Dark Shadows. Dark Shadows was one of the media landmarks of my teenage years – one of my best friends loved the thing, so I always had someone to discuss it with – and Amazon Prime has got the whole shebang available for streaming. All six years' worth. All 1225 episodes. At 22 minutes an episode, that's a lot of watching.

Of course, I'm not planning to watch all of them at once. That would be obsessive. But Dark Shadows is awfully addictive.

In case you don't know – and if you're not an Old-American, why would you? –   Dark Shadows was a late-1960s Gothic-themed soap opera. It featured sets that fell apart before your very eyes, actors who forgot their lines, or had to recite them while swatting flies, props that wandered from set to set ('Oh, look! The pretty afghan is at Count Petofi's house today!'), and plotlines that stretched credulity to the breaking point ('We can travel back in time if we stare at this I Ching hexagram long enough. One commercial break should do it.')

You young folk (under 60) should be grateful. Without Dark Shadows, there would probably be no Anne Rice, no 'Buffy the Vampire Slayer', no 'iZombie', no…you get the idea. Dark Shadows was the kind of thing you call 'seminal', meaning it produces New Stuff by giving people ideas. Slavoj Zizek's writing is seminal. Believe it or not, that lunatic Dan Curtis was seminal, too.

Actually, the actors in Dark Shadows were really good, with one or two exceptions. They struggled valiantly against the challenges of producing a brand-new, half-hour melodrama every weekday. The approach was that of a stage play – a new one every day, with a whole 5-6 hours of rehearsal time. Not too shabby, when you look at the results. They had a forgiving audience – me and Randy and Mrs Hoggett and Elektra and all the other teens who were busy keeping our parents from finding out that we were watching a tv show in which people routinely fell off cliffs, got buried alive or entombed in walls, turned into werewolves and vampires, or were murdered by monstrous spectres newly emerged from a painting.

'It's funny,' I assured my anxious mom. 'Yesterday, the painter slammed the door, and the window shade fell off. The vampire can't remember his lines, and when he's lying in his coffin, he can't see the teleprompter…' By this point, she was bored, and went away. Good. Mission accomplished.

When not fending off the adults or collecting kitschy memorabilia like the joke book Barnabas Collins in a Funny Vein, we were learning a lot about how drama is constructed. And yes, that's the point of this essay, the writing part. Do you often wonder how to get your characters from here to there, and how to construct a plot that possesses both cleverness and a sense of inevitability? You could do worse than watch Dark Shadows. Or check out the modern fanboy blog, 'Dark Shadows Every Day', in which a person even more obsessive than Bluebottle has blogged every single episode of the mammoth epic.

The writers of this television show were under enormous pressure, not only because of time. There were only three of them. These days, a writing team for a regular television drama is about a dozen, and they have a far less grueling schedule. Sure, they were ripping off writers from the Bronte sisters to Bram Stoker to HP Lovecraft. And they did it with style. But their characters were original, they jumped around in time almost as much as the Doctor, and there were fewer actors than characters. That took some imagination.

One of those writers, Violet Welles, had been a theatrical agent before she took up writing Dark Shadows. If she could do it, so can you. Now you know.

Take the end of the 1897 plot. Your problem? Barnabas, who has travelled back in time to prevent Quentin Collins from becoming an angry ghost, has more or less succeeded. The writers' task now is to tie up all the loose ends in this plot so that we can get back to the present, which is 1969. The easiest way to do this is to kill every character in sight. But how?

The evil Count Petofi must be gotten rid of – not only because he threatens Quentin by proposing to take over his body (because it is younger, better-looking, and essentially immortal) and run off to 1969 with it. We also want rid of Count Petofi because Thayer David, the actor who plays him, is tired of him, and besides, he has another character to play in 1969. We also want rid of Petofi's fun, but rather dim, henchman Aristede. There are also a handful of incidental villains and henchpeople we could do without. How to accomplish this?

First, make Petofi angry with Aristede. 'Aristede, you ignorant fool! You have bungled your last bungle!' Now, cause Petofi to recall when he met Aristede. Aristede was on the lam from Dartmoor Prison, because he had just killed Garth Blackwood, the evil Master of Dartmoor. Petofi had calmed the fugitive's mind, so that he stopped hearing the ghostly tap of Blackwood's wooden leg, and Aristede was Petofi's for life.

All of that is explained in one quick flashback, mind you. (The actors merely do a quick change and step over to the Dartmoor Set, which is mostly papier mâché rocks and the usual plastic trees.) Now we're ready to get rid of everybody. How, you ask? In a manner worthy of James Malcolm Rymer himself.

Petofi's got a pet painter, one Charles Delaware Tate. Tate's paintings do remarkable things. One of his paintings has cured Quentin Collins of being a werewolf, a la The Picture of Dorian Gray. On full moon nights, the picture turns into a werewolf, leaving the actor to remain pretty and untroubled by the desire to go out and howl. (Instead, he courts girls and plays his favourite gramophone record.) Other paintings of Tate's have come to life and walked around.

'Quick!' says Petofi. 'Sketch this man, whose image I will place in your mind by the power of my Hand.' (Don't get me started on the Hand of Count Petofi. I will begin to giggle.) Tate sketches Garth Blackwood, who comes to life, peg-leg and all, and immediately begins killing off characters.

To our great satisfaction, he also kills off Petofi, by setting fire to the studio. Tate's studio, not the whole set, which is in New York City. Do keep up.

You see what I'm saying? All this furious plotting has a point: that villains get hoist by their own petard. It's deeply satisfying. You can do this, too. It's fun. And it's safe – as long as you bore the grownups sufficiently that they leave you to it.

Want to hear more? Here's an interview with one of the writers. And just for fun, here is the Hand of Count Petofi in action.