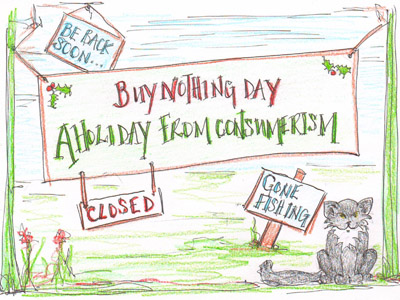 Thursday was my first free nammettime of the week, so I took advantage of this by going into the town centre and doing a spot of resourcing.

My first stop was the British Heart Foundation, a charity Resource Centre. I had a browse round and was surprised to see they've put out a vast amount of Christmas DVDs and CDs – they must have saved them all up for this time of year. I bought a book on HG Wells which I thought might be handy (I keep meaning to write about 'The First Men In the Moon'

both film and book), so I resourced that resource, and it only cost me two resources, it did.

Following that I thought I'd get a pair of scissors; I wanted a particularly fine pair for delicate work as I had an idea to turn my hand (and scissors held in my hand) to paper cutting. So I went to the art resource centre down East Street. The man behind the counter asked me what I wanted as I entered and I said that I wanted some fine scissors. He then asked me what I wanted to scissor, and so I replied 'paper' – I am proud to say that my years of experience playing 'rocks, paper, scissors' did not fail me at the crucial moment. Alas, he said they didn't have any fine scissors and the best place for me to go to in the city centre to get something to do some scissing with was the haberdashery section of Jona Lewie, a resource centre wot famously stops the cavalry. This resource centre is located in Southampton's West Quay resourcing centre, which is located near where sheds are arriving ready for Christmas, including a double-decker wobbly shed.

In the West Quay Resourcing Centre, between the entrance and Jona Lewie, a Lego Resource Centre has opened in the last fortnight or so. As it is my wife's birthday next week, and knowing she is expecting a resource to celebrate it with, and also knowing how much she loves both 'The Flintstones' and Lego, I purchased the Flintstones Lego Set, to be one of her birthday resources. This was quite overpriced but I'm sure will be well worth it. I do like that resource centre, it is bright and full of fun models. The price tags, however, are less enjoyable…

I finally made it to Jona Lewie and descended the stopped-cavalry escalators to the haberdashery level, which was virtually a building site! Boarding and hoarding had been erected all over the place, presumably so that they can erect their Christmas displays but making it very difficult to see what I wanted or even make my way around the resource centre. I eventually found where the scissing equipment was being displayed, but it was all locked up to prevent people half-inching scissors and other sharp objects. So I then had to wonder around the resource centre to find a member of staff who could unlock the resources – I found one on the opposite side of the resource centre, and then he had to wander around to locate where the key to unlock the scissors was, so I got a good tour of that level. Obviously the scissor display section was on the far side of the resource centre from the tills. After the block had unlocked the scissors for me to take a sharp pair off the shelves no members of staff seemed worried about me wondering around with the scissors around the shop – imagine the damage I could do with a half-inch long vaguely sharp blade of fine scissors! Almost as lethal as a biro.