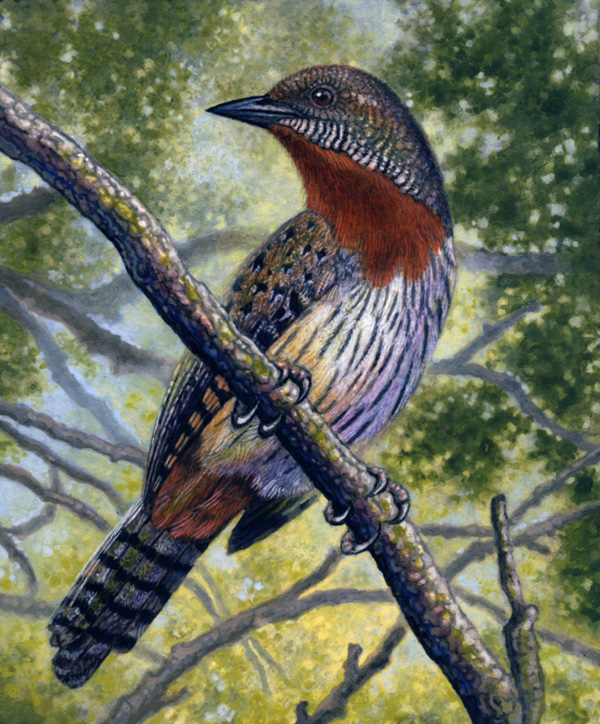 Today I have for you a bird that few people know about. This is a Rufous-Throated Wryneck, Jynx ruficollis. It is one of only two wryneck species occurring in the world, the other one being the Eurasian Wryneck, Jynx torquilla. That one occurs in Europe and Asia, and some of them also winter in West to Central Africa. Rufous-throated wrynecks are entirely African.

Wrynecks belong to the woodpecker family, but are not true woodpeckers. They are smaller in size than most woodpeckers – the Eurasian species is 16-17 cm/6.3”-6.7” in total length, while the rufous-throated reaches 19 cm/7.5”. Both species are very cryptically coloured – brownish with white and black mottling very similar to the bark of a tree, making them inconspicuous when perched. As you gather, the rufous-throated possesses a bold reddish-brown underthroat, distinguishing it from the plain Eurasian wryneck. Unlike woodpeckers, wrynecks don't have stiffened tail feathers. They don't use their tails to prop themselves up while creeping along trunks and branches, as woodpeckers do. They do not clamber on trees much, most of the time perching on twigs or hopping on the ground. Wrynecks apparently resemble the ancient forebears of the woodpeckers, although they themselves can't be considered ancestral to them, but belong to a side branch of the woodpecker family tree. They do posses very long tongues, as true woodpeckers do. Wrynecks eat mainly ants, and use these long tongues to rapidly slurp up large numbers of these small insects. They use their stout bills not to peck wood, but to excavate ants' nests, being partial to the eggs and larvae.


The name 'wryneck' comes from a behaviour displayed both in territorial disputes between birds, as well as in courtship displays. The bird will stretch forward, lift its head to display its rufous throat, cock its tail, and twist its neck so that its head weaves from side to side. Additionally, young birds do a strange neck display if threatened in their nests. They stretch their necks forward first, slowly, and then rapidly retract them while hissing. It might be that this is supposed to mimic snakes, hopefully scaring off whatever is threatening them.


Rufous-throated wrynecks are strange in how they're distributed in Africa. They like a variety of habitats that feature open ground as well as trees. They're found in grasslands (provided there are at least some trees and shrubs nearby), in open park-like savannahs and woodlands, and on forest edges, but not inside dense forests. Though most of sub-Saharan Africa has lots of suitable habitat, they are only found in a few patches spread from South Africa to Ethiopia to the Cameroon and southernmost Chad. The patchiness of their distribution is similar to that of many species that live on high mountains. But in mountain-dwellers, such a patchy distribution makes sense, because the high mountain peaks themselves occur in patches, like islands rising above the seas of grass and trees. Why should wrynecks be restricted to such patches amidst lots of otherwise suitable habitat from which they're inexplicably absent? To date, this question has not been answered, but might have something to do with climatic fluctuations during the ice ages. But there is no other bird with a patchwork distribution similar to that of the wryneck, so it remains an enigma.


In South Africa, this wryneck is not really rare, but rarely seen or noticed. Its cryptic plumage makes it disappear easily amidst the grey and brown bark of the savannah trees. It only makes itself conspicuous when it is calling. This is a repetitive and very distinctive, somewhat nasal 'kwee-kwee-kwee-kwee-kwee' with about ten 'kwees', after which it is silent a short while before repeating the call again. Wrynecks perch on top of trees or bushes as they call, so most of the time a bit of searching will reveal the owner of the voice. Wrynecks call when they start breeding, from late winter into spring and summer. More southerly populations might migrate short distances northward in winter. Some wrynecks of South African origin have been encountered in the Democratic Republic of the Congo. But movements of this species are not well-understood.


Like woodpeckers, wrynecks nest and roost in tree holes, but they don't excavate these themselves. They use natural cavities in trees, or they take over nest-holes from barbets or woodpeckers after they've stopped using them. In spring to early summer, the female lays anywhere from one to six eggs, but mostly three or four. Both sexes incubate. Sometimes they are victims of honeyguides. A honeyguide lays an egg in a wryneck nest; the honeyguide chick, which has huge, sharp 'pincers' at the tip of its bill, kills the baby wrynecks after they hatch, and is raised alone by the oblivious wryneck parents. Fortunately, this doesn't happen very often. Overall, this species is not considered endangered.


I leave you with a sentence about as cryptic as the plumage of the wryneck. Believe it or not, this is an actual English sentence. Here it is: "Cwm Krutza qoph jynx fled brigs." A point to anyone who can say why this sentence is remarkable; ten points to anyone who can explain what it means! Please comment below.