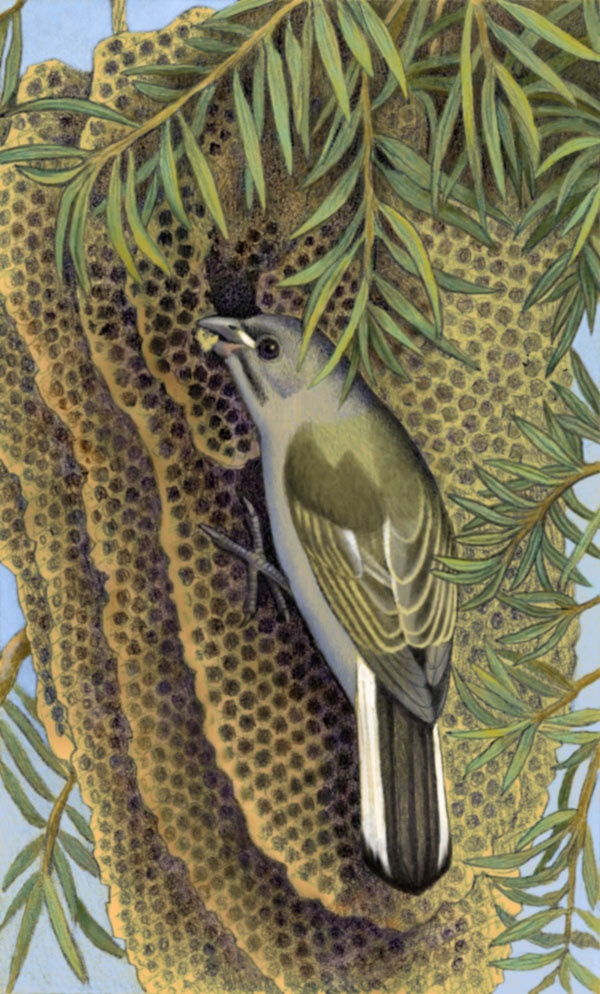 Something special this time! The scene you see here, is what I witnessed with my own eyes. I had a bee's nest in a tree in my garden … not in a cavity, the combs were simply built hanging down from an open branch. The bees attracted honeyguides to my garden! There are two species of honeyguide around – the greater, and the lesser. I've seen both here, but this specific bee's nest attracted mostly the lesser, Indicator minor. At some stage however, the bees had enough of that particular nest, and abandoned it. Or maybe that particular colony dwindled to nothing. All I know is that there were hardly any bees left, and so the honeyguide felt bold enough to come and sit on the nest and eat it! I saw it doing that, observed it, and imprinted the scene in my mind's eye. And here it is! You can see the combs hanging down, and the honeyguide clinging to them with its woodpecker-like feet, and eating a small chunk of honeycomb with its stout bill.

Honeyguides are closely related to woodpeckers, barbets and toucans, although they look very much like songbirds, especially finches, flycatchers and warblers. They are unique and remarkable for several reasons. First, they are the only birds that can digest bee's wax! For all other birds and for most other things like ourselves also, wax is an indigestible and non-nutritious substance. But honeyguides regularly eat the waxy combs of bee's nests, a few also eating plant lice that cover themselves with wax for protection against other predators. Honeyguides have even been seen flying into churches and eating the wax dribbling from the candles!


The lesser honeyguide is one of the species most commonly attracted to bee's nests. It does not apparently share its greater relative's habit of leading people to the nests, for which the family has been named. The greater honeyguide has also been alleged to lead animals like honey badgers to bee's nests, but this has not yet been reported by reliable witnesses. When leading humans, it makes a strange, husky chattering call; if the people notice the bird and follow it to the nest, it will wait for them to take the honey; traditionally they are supposed to then leave a piece of comb and honey for the bird. It will at any rate eat from what honey and wax is left in the ravaged nest.


The lesser honeyguide doesn't do this, instead just raiding bee's nests on its own. Honeyguides have unusually thick skin, which supposedly will help them not to get stung so easily.


Unfortunately, the habit of honeyguides leading people to bees' nests is dying out. Fewer and fewer human communities need to get honey from the wild, it being now much more convenient to just buy honey, syrup or sugar from the store.

Another remarkable feature of the honeyguide family is its parasitism. It is the most parasitic family of birds, all known species being nest parasites – while the cuckoo family, notorious for its parasitism, only practises it in about half of its species. The honeyguides might be rivalled by the whydah family, if indeed it is considered a family separate from the waxbills.


The honeyguides practise a notoriously violent form of nest parasitism. They parasitize birds that nest in holes, like woodpeckers, barbets, kingfishers, bee-eaters and hoopoes. They'll watch for opportunities to enter their target's nest, sometimes working together to distract it and lead it away from its nest. If the male manages to keep the host occupied, the female will flit in and lay a single egg. She may also peck holes in her host's own eggs. Sometimes she's too slow and her target will surprise her at the nest and fight with her, sometimes pulling her out by the tail, and sometimes pulling out her tail feathers! But if she's successful, the egg will be laid and being very similar to the other eggs of the host, will be unlikely to be spotted.


When the honeyguide chick hatches, it is equipped with a cruel weapon: a viciously sharp, hooked beak, much unlike those of its parents. If any of the host's eggs hatch, the honeyguide chick will kill those chicks with powerful bites, leaving it alone in the nest. It makes a cheeping similar to those of the host's chicks, but louder, apparently to stimulate its foster parents into a stronger feeding response. It grows rapidly and is soon larger than its foster parents! It loses the hooks on its bill, by three weeks having a short, stout, blunt bill similar to that of its parents.

Yet another habit of honeyguides, the lesser being no exception, is that of sitting on a perch and singing pretty much the whole day long – at least, during the breeding season! The male chooses his spot, and that's his spot: he will stay faithful to it pretty much his whole life. In our local game reserve, there is such a spot – a big fig tree! At the top of that fig tree the honeyguide sits, and he sings his song. I've been hearing him now singing in that tree for many, many years! Only a few occasions when I've been in the reserve and passed that tree, I did not hear him singing his song. The honeyguide song is actually not much of a song, but a repetitive chirping. It is a very distinctive sound.


It might actually not be the same honeyguide that's been singing there for all these years. It is possible that honeyguides 'inherit' such perfect singing spots from others when they die. It's even been seen that one honeyguide sings for a while and then departs, perhaps to go get some food, and his place be taken by another male who then sings in the same manner. But the bottom line is, such stable 'singing spots' offer the best chance of seeing these birds. It may be a bit hard to locate the bird by its call, but once it's done, the bird can be seen!


These posts are where the male and female meet each other. When the female comes to the male, they'll mate, display to each other, perhaps fly together for a while, and sing together as well.


Lesser Honeyguides are widespread in Africa, living in savannahs and woodlands (and occasionally entering gardens) but are nowhere very common. The species can be recognized by its stout bill, the white spot in front of its eye, its dark 'moustache'-stripe, and its white outer tail feathers. If its foot is seen, with the two toes pointing forward and the two back, it can easily be seen not to be a songbird (all of which have three toes pointing forward and one back). There are about seventeen species of honeyguides, two occurring in southeast Asia, and the rest in sub-Saharan Africa.