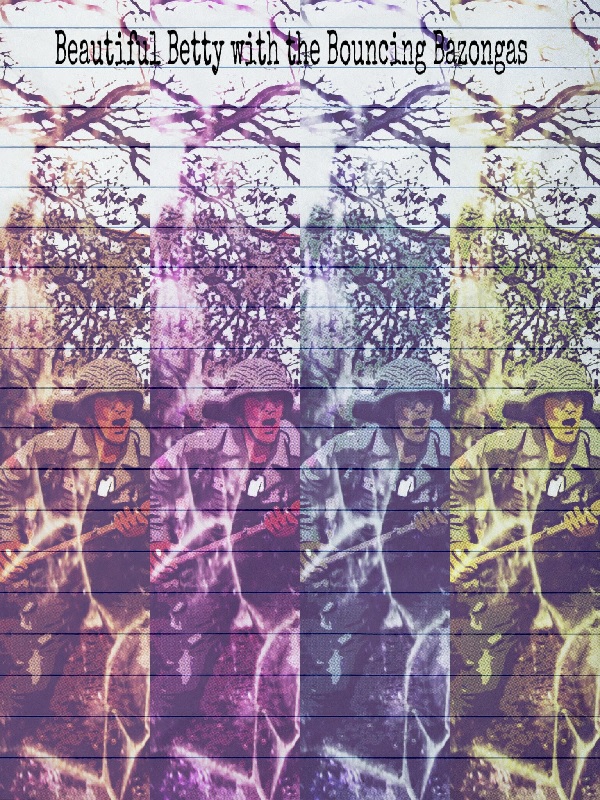 Sam Streisand woke to a screamingly blue Mediterranean sky and the equally screaming roar of airplane propellers. His head ached slightly, like the distant memory of a migraine.

What the firkin? he thought fuzzily. This wasn't where he'd gone to sleep. He remembered distinctly – no, not distinctly, the scene was already fading in his mind, and he snatched at it fiercely before it could run away, oh, no, you don't, got you, you sucker… He had been in hospital, that was it. Something about his liver. His current wife had been there, crying crocodile tears. He was a successful author: his book, his bestselling masterpiece, firk it, the epic black war comedy Beautiful Betty with the Bouncing Bazongas, had netted him a cool million and earned him the title of America's greatest antiwar writer. Fools, he'd kind of enjoyed the war when he wasn't being shot at. The weather was great, most of the time. Let 'em think what they liked, he'd had fun and got paid for it. And now….

The roar of the propellers got louder. And the sun got hotter. He wasn't in the hospital any more. What the firkin?

'Hey, Lieutenant! Wanna stop nappin' on the runway, please?' Streisand sat up and shaded his eyes. O'Leary? Stupid, good-natured O'Leary, the ground crew sergeant? He grinned and waved, pulling himself to his feet. As he moved away from his inexplicable position in the direction of equally inexplicable Quonset huts, he remembered that O'Leary had died from a strafer's bullets down on the beach in '44 while trying to help a comrade. On the beach. That beach. The one just over the horizon from where he was now standing, at the edge of an airfield that shouldn't be there any more. The war had been over for more than half a century. Or had it? Streisand figured he'd better find out, though he really didn't think he wanted to.

Streisand entered the mess tent to be greeted raucously.

'Hey, Streisand, come join us!' a jovial pilot (his pilot) called out. 'Tell that joke again, Seymour.' And Seymour told the joke again. Streisand laughed, although he'd heard it many times: once when Seymour told it the first time, then again when he, Streisand, retold it in Beautiful Betty with the Bouncing Bazongas, and three times again when he proofread his manuscript, and yet again when he went over the galley proofs, and thousands of times when fans shared their favourite Beautiful Betty moments over the autograph table…. Streisand was sick of that joke. But he listened dutifully and laughed on cue. It was the least he could do: he'd made a lot of money out of that joke, and Seymour would be dead in three weeks.

Seymour told the joke with relish, proud of himself for having one to tell. Usually, Seymour was a listener, a shy, gangling fellow pushing twenty. As he watched the animated face he'd almost completely wiped from his memory, Streisand felt a flush of shame. The Betty version of Seymour hadn't been this happy, hopeful, doomed kid. Streisand had turned him into a verbal sketch of awkwardness: a six-foot-eight skinny buffoon with wall-to-wall freckles, ears that stuck out a mile, and a comic stutter. Seymour didn't stutter, though he had a slight speech defect when he talked fast. Watching him now, Streisand realised that he'd forgotten about the way Seymour's eyes lit up when he thought everybody was having fun.

Captain Metcalf turned to Streisand. 'Better grab some chow, Sam. Briefing's in twenty minutes.' Metcalf was a serious-minded Texan who'd become a civil engineer after the war. Streisand had turned him into a rip-roarin', pistol-wieldin', loudmouth sonofagun, sort of a cross between Yosemite Sam and Slim Pickins. He nodded to the pilot, and turned away, hoping nobody saw him blush. What would they think of that? Nobody seemed to notice.

The food was as bad as Streisand remembered. He didn't feel bad about maligning the cook.

Streisand wasn't able to pay much attention to the briefing, which was bad because he was the bombardier. He was too busy studying all the faces: young, not-so-young, young, but aged by stress, fear, and fatigue so their own mothers wouldn't recognise them, all trying to concentrate on the unnatural task at hand. Which was to use those heaps of metal out there to climb up into the sky and ferry a load of death-dealing explosives over some town or city, open the bomb bay doors, and drop them screaming down on whoever happened to be unlucky enough to be on the ground. Precision bombing, my association, he thought, and then thought of something else. Thinking of something else – like Beautiful Betty's bouncing bazongas – was what you did when you didn't want to think about the spooning couple in the cinema you'd just wiped out like some war-sanctioned vandal.

He thought about Betty for the rest of the briefing. After all, he'd been here before. Whatever this was – flashback? hallucination? near-death experience? – it surely didn't expect him to memorise the details of tomorrow's bombing run. He'd leave that up to Capt Metcalf and try to enjoy the ride down memory lane.

Streisand finally met up with the object of his affectionate reveries that evening, as he sat musing in the direction of a Mediterranean sunset. He didn't notice anyone coming until he heard a melodious voice in his ear.

'Penny for them, Sam,' the voice said.

Streisand turned and saw her: twenty-two again, she was, with soft auburn curls falling around her shoulders. She was wearing her nurse's uniform, but had taken off the starched cap. Normally, Streisand would have been thinking about how well she filled out that uniform. He would have been mentally forming phrases like, 'round, firm, fully packed' and 'built like a brick….' But for some reason, in the afterglow of the day, all he could see was the catchlight in her eyes and her perfectly natural smile.

'I was thinking about you, dollface,' he said simply. Betty joined him, and they sat companionably, watching the sun go down and making wistful plans for impossible futures.

The next morning's bombing run was relatively uneventful, though they lost the new tailgunner. At the hasty funeral, it turned out that no one could remember his name. Fortunately, they had the dog tags. The chaplain, kind and tired-looking, asked him to say a few words. He shrugged, unable to think of anything suitable. The chaplain read the Twenty-Third Psalm as if he meant it, and Streisand recalled with shame how he'd caricatured the cleric in his novel as a nervous-nelly with a facial tic and a tendency to spout big words. Somehow, the words of the service seemed comforting and appropriate, this time around.

The war dragged itself out for another year or so. Streisand lived (relived) every day of it. Heat, cold, rain, bombs. Jokes, bad food, stolen moments of intimacy, the sudden shock of death. As time went on, he remembered more of it: the peculiar aura of the early morning, the sick feeling in the pit of his stomach as he climbed into the jury-rigged death machine, the deliberate blanking of the mind that coincided with the roar of the propellers…. After awhile, he stopped wondering why he was reliving his stressful youth, and got on with observing.

The first time around (as he thought of it), Streisand hadn't really paid attention. Even though he thought of himself even then as an author-in-the-making and thus a trained observer. He'd been so busy criticising the action that he hadn't seen what was right in front of him: that everyone was just as lost as he was, just as terrified of dying. Each in his (her) own way was trying to infuse some normality into the situation. That was where all the little tics and tricks came from he'd lampooned so furiously (lamely) in Beautiful Betty with the Bouncing Bazongas. After a half-century or more of life – badly-lived, two failed marriages, one stint in rehab, several lawsuits and a few thousand lies in print – Streisand saw it all differently. What the eyes of self-involved youth had missed came into focus to regretful age. He wished he had that novel to write over again. He would show them.

Finally, the announcement came: Berlin was in Allied hands. Hitler was dead and there was dancing in the streets of New York City. The survivors threw their last party with all the liquor left on the island. Boats arrived to take them home. One by one, they said their goodbyes and boarded the bus for the harbour in a jubilant mood.

Betty hugged Streisand fiercely. 'Best of luck, Sam,' she said through tears. 'Write me when you get settled.' He hugged her back, both knowing that this would never happen.

As the last bus was almost finished boarding, Streisand moved to join the back of the line. A surprisingly strong arm held him back.

'Not you, Sam.' He turned to look at the weary, kind face of the chaplain.

'Why not?' Streisand demanded. 'It's over, isn't it?' The chaplain shook his head.

'For you, my friend, it is just beginning.'

Streisand stared at the man. Irrelevantly, he noticed that the officer wore the 'shepherd's crook' chaplain's insignia that had been out of date since the previous war. 'But….but….I got it, padre, really, I did. I learned, this time around.' He summoned up what he hoped was a confident smile, but which he suspected was more a rictus of fear. The chaplain shook his head and gave Streisand a mournful smile of his own.

'I'm afraid that's just the first step,' the chaplain said. 'You've still got to deal with them.' He pointed, away from the road. Away from the departing bus headed for the jetty, and the boat home, and New York City, and the Four Freedoms they'd fought for. He pointed back, in the direction of the airbase. The airbase that was even now being furiously rebuilt, its planes restored to 1943 condition, its supply sheds restocked, the windsock remounted…. Streisand followed the pointing hand, and gasped.

The base was a hive of activity. Soldiers were rushing about madly. Some were having hilariously complicated accidents with jeeps. Others were chasing each other around, shouting ludicrous obscenities. One was naked in a tree. Through it all strode a colonel wearing riding spurs, brandishing a sword and a Colt .45 and shouting, 'Law and order, boys!'

In front of the hospital hut stood Betty. But not the real Betty. It was Streisand's Betty. Beautiful Betty with the Bouncing Bazongas. Her proportions were monstrous: her waist tiny, her hips ridiculously round. Her huge….bazongas….bounced. Her expression was one of relentless, mindless joy, and the lipstick on her oversized pout was a violent crimson. Spotting Streisand, she cooed in a little-girl voice like Betty Boop's, 'Come on, lover! Let's go for a picnic before the krauts blow us all to Hellington!'

Streisand looked at the chaplain with tears in his eyes. 'How long?' he asked.

The chaplain sighed as he grew wings: nice, khaki-coloured ones with brass-tinted tips to match his uniform. This wasn't the first time he'd heard that question.

'We'll let you know,' he replied as he flew away.