Memories of a Meadow in June 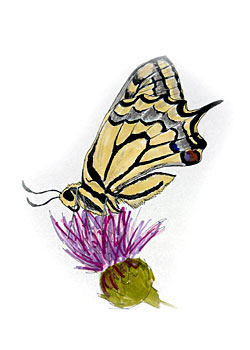 When I was growing up, my family lived on three acres of mostly forested land. A third of the land was not forested. This was where we had our vegetable garden and 'field', though it seemed more like a meadow. I would stand at one end of it and practice hitting baseballs. At the other end was a row of white pines that my father planted in the early 1950s.

I always looked forward to early June, which brought dozens of cheerful yellow buttercups to the meadow. A little later in the season, some bright reddish orange flowers would spring up, and brown skippers with orange spots would flee in panic as I walked toward them. Cinquefoil and Dewberry vines would weave crisscross the grass, as if weaving a chess board of sorts..

Late June/early July was a special time, because that was when the butterflies would arrive. It's not hard to imagine why they would come at that time, for it was then that the milkweed would start blooming.

I mentioned the family garden earlier, but I left out the raspberry patch, which was right next to it. Late June was when the raspberries became ripe enough to pick, but it was also when the milkweed bloomed. Somehow, milkweed found raspberries to be congenial companions – maybe the raspberries protected the milkweed from buffeting winds? In any event, the milkweed seemed to attract every bee in the area. Would you care to guess how dicey it was to try walking among thorny raspberry bushes, while at the same time trying to note where the bees were?

Sometimes I would follow the butterflies as they flew across the meadow after having their lunch. The swallowtails seemed to enjoy a less idyllic environment, for they usually flew over to the leaching field for our septic system, and alighted on the ground there. Go figure!

By mid-August, the meadow usually fulfilled its secondary function as an overflow area for
rampaging pumpkin vines. The butterflies rarely seemed interested in what the pumpkins
were doing. The second- or third-generation Monarchs would be getting restless anyway. All of our milkweed was Asclepias Syriaca, which was looking kind of ratty by then. Other
kinds of milkweed would be in bloom somewhere else, and the butterflies (not to mention bees and hummingbirds) would be off in search of them.

Now that I'm older, I understand that Monarchs are essentially a tropical species that migrates in search of the best deals on nectar and food for their young. June always seemed like a magical time that started with the lady slippers in the woods and the fragrant locust tree blossoms along the edge of the meadow. The month would climax with fresh raspberries and a wonder of butterflies.

My family no longer owns this land, but a new family with small children is living there now. I hope they can discover the magic that my siblings and I enjoyed so long ago.