Sometimes You Get Things Back 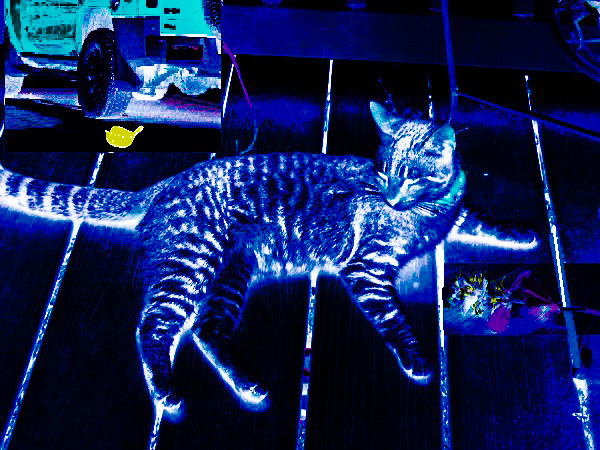 Lou stood in the ancient burial ground, alone and terrified and all but overcome by the powerful scent of the blooming lilacs. Alone, that is, except for the corpse of the damned cat. Oh, and whatever was out there in the flowering bushes on the edge of the clearing, watching, waiting for him to make the metaphysical mistake of his life. The hair on the back of Lou's neck stood on end, that's how he knew the Wen-day-ya-ho, or whatever they called it here in the North Carolina mountains, was out there. Out there waiting for a sucker so that it could suck a soul, while in here, in the sacred circle, or whatever, he was torn between fear of that and fear of what his wife was going to say when she got home with their son Cal and found out that the stupid cat had been hit by a car and he had to explain death to a three-year-old, which she didn't want and he didn't want because he loved his son and oh, god, I know I screwed up but do I have to sell my soul to get out of this mess?

After a few more minutes of this, Lou shook off his terror long enough to pick up a shovel and dig. He threw the deceased Maine cooncat, not tenderly, into the hole, covered it up, and ran like hell back to the house, where he took a twenty-minute shower, all the while muttering, 'They can't come into the house without an invitation. These things have rules, right….?'

Cal was worried about his cat Iglesio – for about two days, until Iglesio came home, smelling strongly of lilacs and with a dead vole in his mouth. Cal fussed over him for a bit, and then their companionship settled back to normal for everyone but Lou. Looking at the cat gave Lou the creeps, so he avoided looking at it. Cats don't hang around people who stare at them, which Lou used to do, so Iglesio became markedly friendlier. This made Lou suspicious to the point of paranoia. Cal noticed.

'Dad,' he protested through a mouthful of Cheerios, 'Don't be mean to Iglesio. He's just trying to be friendly.'

'Eat your breakfast,' Lou replied gruffly, pushing the cat out of his lap. 'You'll be late for preschool.'

Iglesio sauntered up to the windowsill, where he sat purring loudly, and giving off the scent of lilacs, although the bushes were long past blooming. Lou shuddered inwardly.

One late summer afternoon, Lou was sitting on the front porch of the big farmhouse, shucking corn. He wasn't too fond of the task, but his wife Becky claimed the cornsilk made her break out in hives. The spiderweb tendrils of the vegetable tickled his bare legs as he shucked, throwing the cleansed ears into a tub for the kitchen. Shucking corn was a chore, but fresh-frozen corn-on-the-cob was a winter treat. Iglesio sat purring on the porch railing: Lou hardly noticed. He was becoming accustomed to what he privately regarded as the intolerable smugness of the revenant feline. He'd watched the tomcat surreptitiously for signs of incipient demonic possession, but so far, all he'd observed was the normal activity of a large, friendly household predator. Iglesio certainly seemed to be thirty-five pounds of perfectly normal furball. Out in the yard, Cal chased butterflies with a small net. He wasn't catching any, because the butterflies were too small and erratic.

From inside the house, Becky could be heard humming to herself. Apparently desiring more music than she could make herself while food processing, she turned on the radio. Soon, NPR was telling its listeners about Carolina folklore and folk music. Middlebrow feel-good, Lou thought derisively. His attention wandered to the argument he'd had with his neighbour Jed about whether that program in particular was representative of Appalachian legends. 'They always accentuate the positive,' Lou had insisted. 'I'll bet there's a lot of dark stuff they don't talk about.' Jed had finally conceded that this might be so.

Lou was jerked from his reverie by the deep sound of a diesel horn. He looked up and around, but not fast enough. His frantic gaze took in the situation: an eighteen-wheeler, looming out of all proportion huge in his view, barreling down the two-lane that ran by the farmhouse: Cal, innocent, merry, three-year-old Cal, laughing as he chased a butterfly in a straight line for the road an into the path of the oncoming behemoth: himself, barefoot, covered in cornsilk, behind a porch railing, thirty feet away, too old and too slow to save his son….

The scene took on the mauve tint of nightmare: the giant truck sweeping by with a last blare of its diesel horn, the child's body, limp and lifeless, tossed aside like a rag doll, his little baseball cap…oh, my god, what's that in his cap? Filled with blood….

No no no no… he wanted to scream, but could not because he had no air I don't want this, I want him to grow up, play first base, get trophies, skin both knees riding a bike, eat more Cheerios, lots and lots of Cheerios, boxfuls and supermarketfuls of Cheerios, go to Duke, get a PhD in something and be interviewed on NPR and   what is NPR playing?   oh god oh god it's that Wen-day-ya-ho song, I swear it is, no no no no I'll never do another thing wrong in my whole, entire life just let this child live….

Lou hadn't even noticed the cat. Iglesio, thirty-five pounds of Maine cooncat, launching himself off the porch like a fur-covered ICBM, straight at his target: a little boy running past a rural-route mailbox and into the path of tons of steel and momentum. While Lou was indulging in his guilt-induced cereal fantasy, Iglesio was acting on pure instinct. Before you could say, 'Hey, look out!' the cat had done what cats do best: run right in front of Cal's feet, tripping him up. The boy fell beside the mailbox, barking his shin on driveway gravel, but staying out of the way of the diesel truck, which rolled on down the road, leaving no tragedy in its wake.

'Mom!' Cal wailed. 'Have you got any bandaids? It think my knee is bleeding.'

Right then, Lou could have kissed that cat. The cat probably wouldn't have liked it, so he didn't.

Another beautiful spring morning: the air was clear and crisp, not yet troubled by summer humidity. Lou sat on the porch, careful not to muss his best suit. Becky would kill him, after she'd brushed it. He drank in the air, heavy with the odour of flowers.

The screen door opened. Lou looked up to see his son Cal, also dressed up, wearing a pleased grin. 'You look good, Dad,' he said in the pleasant baritone that constantly reminded Lou of his late father.

'Pretty good yourself, Mr Graduate,' Lou grinned back. 'What's that you've got there?'

'Just a little present for Iglesio,' Cal said. 'I owe him for being here at all.' He showed Lou the little bouquet of lilacs he'd tied up with a strand from the tassel of his graduation cap. Lou watched thoughtfully as Cal crossed the yard to the tall hickory tree and, with a gesture of affection, laid the bouquet in front of the little wooden marker. Lou had had that marker carved by the sign guy that came around to the fair every year. Burned into the wood were the words:

While they were still waiting for Becky to finish primping for the graduation ceremony, someone drove up in a pickup. It was Bill Rogers, an old friend from over Cherokee way. As he climbed out of the cab, Lou was surprised to see that he was carrying a small wicker basket: it looked startling delicate in Bill's gnarled farmer's hands. They greeted one another. Bill held out the basket to Cal.

'Here, son,' he said. 'This is your graduation present from Martha.' Martha was Bill's cat. Inside the basket was a tiny, fuzzy kitten. It looked up at them and mewed with the innate sense that kittens have that if they aren't really cute, they might get eaten, so they'd better be cute with a vengeance. It was about eight weeks old. Lou remembered NPR saying that eight weeks old had been scientifically determined to be the time of maximum cuteness for kittens and puppies. What a survival mechanism, Lou thought, and immediately felt guilty about this.

Cal thanked Bill profusely. 'He's wonderful, Bill! I'm going to take him and introduce him to Iglesio.' Cal took the mewing basket over to Iglesio's resting place as the older men exchanged shamefaced glances over the whimsy, which touched them, though they didn't wish to show it.

'I'll be going now. I know you have a big day today.' Bill started to get back into the pickup. Lou stopped him.

'Bill, you're Cherokee, and there's something I've been meaning to ask you.'

Bill waited patiently, hoping it wasn't going to be one of 'those' questions. But Lou startled him by asking, 'What does "Wen-day-ya-ho" mean?'

Bill smiled. 'From the old morning song, you mean? People sang that in these mountains a long time ago. It means "I am of the Great Spirit". It's just a nice song. I'll send you a CD, my granddaughter sings it with her music group.' He added jokingly, 'You'd know these things if you ever bothered to visit the museum in Cherokee. It's your culture, too, you know.'

Relief and shame flooded over Lou as he stood waving good-bye to Bill and waiting for his wife and son to join him for the ride to the high school and Cal's future.