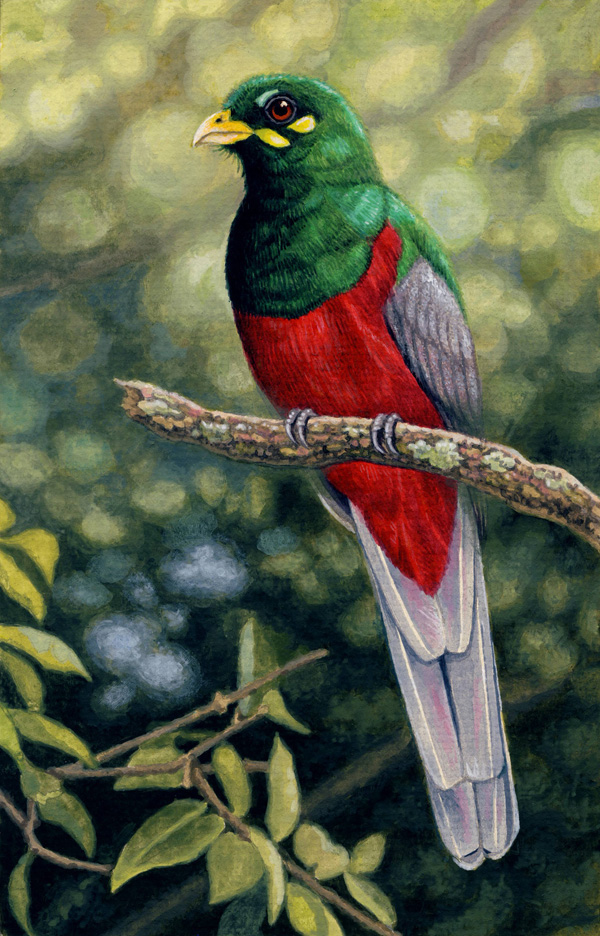 I painted this in celebration of my first sighting of a Narina Trogon, Apaloderma narina, a few weeks ago in the Magoebaskloof region. The species is not rare, and I've heard it on many, many occasions, but it is very difficult to spot. Most of the time the birds sit motionless on branches in dense forests, often with their green backs turned toward you and their conspicuous red bellies away. They are wary and, if approached too closely, will silently fly off. The bird I saw was in a plantation and sitting on a high branch; it was at quite a distance and flew away before we could come any closer.


So what is a trogon? It's a bird from a family almost exclusive to the tropics; trogons occur in Central and South America, Africa, and Asia. One species, the Elegant Trogon, just makes it into the southern USA. These birds are small to medium-sized, the largest being the Resplendent Quetzal, a breath-taking species from South America, with extended tail feathers bringing its length to more than a metre/yard. Trogons have very small and weak feet; they spend much of their time just sitting on branches, and can't walk or hop. They typically perch with their bodies quite erect and the tail angled almost straight down. They have very delicate skins, giving taxidermists difficulty in preparing museum specimens. Their plumage is soft and sometimes iridescent, almost always with brightly coloured breasts and bellies in the males. They have short, curved bills sometimes with toothed edges, and a wide gape. They feed on insects or fruit. They catch insects on the wing, flying from and returning to a perch. They also pluck fruit from trees by hovering up to them and grabbing them in their beaks in mid-flight. They also use their beaks to peck and bite their nest holes into soft, dead wood, or in arboreal nests of wasps or termites – this gives them their name, for 'trogon' means 'nibbling' in Greek. Most characteristic of trogons is their toe arrangement: like most birds, the first (innermost) toe on each foot is turned backward, but in trogons the second (next to innermost) toe is turned backwards as well, so that two toes face forward and two backward on each foot. Other birds with equal forward and backward toes, have the first and fourth (outermost) toes turned backward.


It's always been a great puzzle figuring out to what birds trogons are related. They've been considered as close to owls, nightjars, rollers (and other coraciiforms), cuckoos, parrots and woodpeckers. All evidence we have now shows them to be distantly related to any of these at best. They might be closest to a group of unique African birds, the mousebirds, which I hope to feature here soon. But being so distinct, they're currently classified into a family and order all of their own. Trogon evolution goes back very far – the earliest indisputable trogon fossils date from over 50 million years ago. These ancient trogons were found in Europe, where the group no longer occurs – but the climate was warmer back then and even northern Europe sported lush rainforests. Today the greatest diversity of trogons is in South America, with over twenty species; about twelve occur in Asia, and only three in Africa. But ironically Africa may be the original home of the group, as the three African trogons appear to be basal or 'primitive' in the family. The South American trogons, in turn, appear to all be (geologically speaking) quite new arrivals on the continent, colonising it after the formation of the Isthmus of Panama a few million years ago.


The three African trogons are very similar, all being green above and bright red on the breasts and bellies. The females are slightly duller and have a brownish colour replacing some of the green and red. The species differ in details of the tails, and in the coloration of the bare skin on the face. All of them are close in size, 30-34 cm/12"-13.5" in total length. The Narina trogon is the most widely distributed, ranging from Sierra Leone in West Africa to Ethiopia in East Africa and down to the Eastern Cape Province in South Africa. While the other two are strictly rainforest birds, the Narina trogon also occurs in drier habitats such as well-developed woodland, riverine forest, and dense, thorny thicket.


The scientific name of the Narina trogon means 'Narina's soft-skin', referring to the typical tender skin found in the whole group, and to Narina, a mistress of the famed ornithologist François Le Vaillant who explored southern Africa in the eighteenth century. Narina was a Khoi-Khoi woman and her actual given name would be unpronouncable to most people; Narina was a simplification of a Khoi-Khoi word meaning 'flower'.


Not much is known of Narina trogons in South Africa. They are very widespread and apparently common in suitable habitat. Their repetitive, soft, mellow hooting give them away; it is a sound I hear almost every time I visit an indigenous forest area. But as I've said, they're very hard to actually see. They seem to know you're looking for them, and turn their back on you, making them almost imperceptible against the leafy green background. They can turn their heads almost completely around, like owls do, and so can watch you even when you're behind them. One way of attracting them, is by playing recorded trogon hooting back to them – but this has not worked on any birding outing I've been on so far.


If you do spot a trogon, it is unlikely to be doing anything exciting. It will just sit in one place for a long time, and then suddenly fly off and disappear entirely. All study of their behaviour has thus involved a degree of luck. They feed mostly on insects and other small critters, being partial to the cicadas that noisify so many forests and savannahs in the African summer. They seem to be monogamous and territorial; males call more frequently in the breeding season. When hooting, the male's throat expands, exposing a large area of naked skin, and he fluffs out his bright red breast feathers. The trogons seem to undergo small-scale migrations, in some areas moving into savannah or woodland in the wet season and back to forest in the dry season. Sometimes on migration they enter atypical habitat; some collide with windows in urban areas. They nest like other trogons in tree cavities, either excavated themselves or taken over from other hole-nesting birds. Both sexes incubate the eggs, which may number up to four; the chicks are fed on insects. The youngsters start out dull, acquiring their bright plumage on reaching adulthood.


Narina trogons are at present not endangered. They do suffer from some range contraction as a result of deforestation in certain areas. But they are somewhat adaptable, and still occur over a very large range. They must be some of the most rarely-seen of the 'common' bird species of Africa.