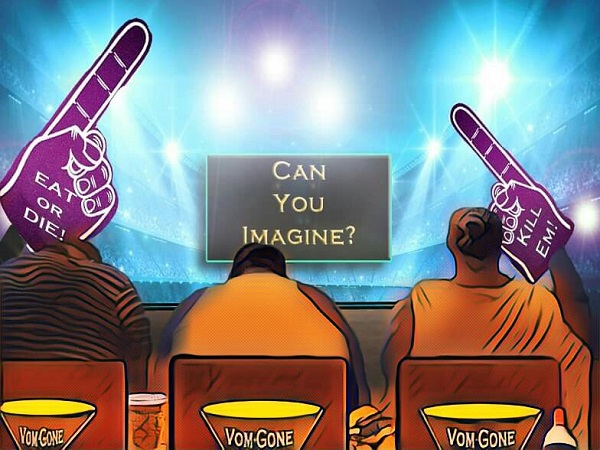 Although entry to the arena was free, (after all, everything nowadays was free), the queue was enormous.

Crowds stood at a respectful distance from each other, shuffling forwards politely, careful to keep out of each others' personal space.

A few dozen yards away, a brief commotion, the queue tutting disapproval at the youth for shouting out (and possibly causing distress) to those nearby.

The youth promptly apologised profusely for her uncouth behaviour, explaining in a respectfully low voice that a fresh supply of free t-shirts had arrived.

The crowd nodded thanks as they crammed their frames into the latest treat, swapping candyfloss and hotdogs from hand to hand as they complimented each other on how fab they looked.

Volunteers (strange folk to give up their free time just to perform menial tasks that could be done much more efficiently by machine) handed out yet more freebies at the entrance.

The podgy masses eagerly took free armfuls of candy, fizzy drinks, and popcorn, keen to be seen to be useful consumers for the ever present, and much appreciated, cameras.

Adults were bombarded with free samples of the latest alcoholic treats, freebie lighters forced into hands already full of freebie cigars and cigarettes, those still under the recommended consumer age of twelve, pleaded softly with their elders, (careful not to convey any implied neglect) until they were patted on the head (physical contact obviously kept to a minimum) and offered a quick drag or a mouthful of wine.

The crowd waddled on, thankful as the moving sidewalk eased their bulks upwards towards the spacious arena seats. Hydraulics hummed reassuringly as the seats adjusted to the weight of the audience.

Twenty-four/seven. You want it? Have it! Enjoy life! Be happy!

Gunther settled back, enjoying his latest drink, and scanned the info-screens for the details of the evening’s free entertainment.

Numerous up and comings, a few has-beens, and a guest star from across the ocean, all confident of polite applause from the two hundred thousand gathered at the arena, and, obviously, the billions of housebound watching at home, enjoying their bedridden lives, and consuming along with the more mobile citizens who had made it to the live show.

Then, at nine, the main event.

He paused to pull out the funnel from the rear of the seat in front of him. His neighbours smiling their approval as he vomited into the pipe, pleased that he was contributing by making more room to consume.

The main event, yes, Gunther cheerfully wiped his mouth on the freebie towels, cheerfully took another bucket of cheese fries and a beer or three, and settled down to watch the infomercials.

Can You Imagine? Years filled his eyes as the cartoon began, this was one of his favourites!

Can You Imagine? A cartoon classroom, healthy children, slurping pop and guzzling sweets, a few bright stars heaving themselves to the Vom-gone funnels by the teacher’s monitor, the cyber-tutor handing out golden candy stars. Proud moments.

But. Can You Imagine?

Cartoon zooms in on a sickly, grey child. Painfully skinny, miserable mouth in a ghastly grimace as she shook her skeletal head and said, 'No thanks!'.

The Arena shared a mutual gasp, shocked once again by their favourite horror story.

Another child appeared. 'No more, thank you!'

Yet another, 'I've had enough.'

The classroom suddenly became a black-and-white nightmare, panning out as the disease spread through the school, further out, freebie stores closed, factories shut, crops and livestock died, unconsumed, in the Agro zones.

War and revolution (ancient words confined to unread, dusty books a thousand years ago) returned to the world.

Sunken eyes burning red as she whispered the word 'enough!'

Screens filled with nuclear blasts, a dead world, the crowds and homebound viewers wept. Grabbing handfuls of freebies, keen to consume away their shock.

Boos filled the arena as the first group of skinny, non-consuming, deviants were dragged out onto the sand.

Gunther cheered, spitting mouthfuls of freebies, as the executions began.