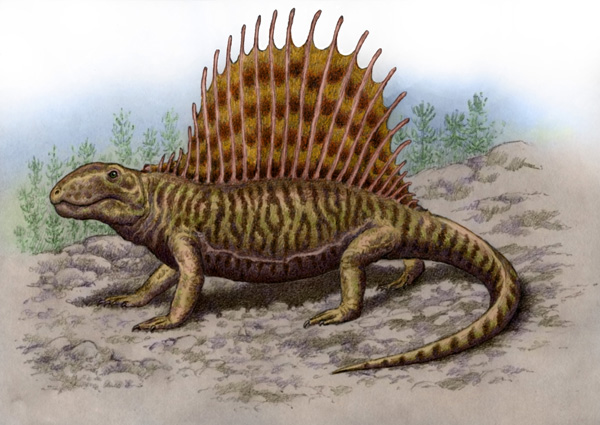 Last time I treated you folks to three old pelycosaurs, Tetraceratops, Secodontosaurusand Sphenacodon. In that entry I mentioned the much better known pelycosaur, Dimetrodon. So now let me devote an entire entry to it!

This big old sail-backed critter is indeed very well known; it is often illustrated in books, and there are also plastic Dimetrodon toys that are widely sold. Many people think it's a dinosaur. It isn't! It lived a long time before the first dinosaurs. Its heyday was the early Permian, 295-272 million years ago. By comparison, the first dinosaurs originated in the middle stages of the subsequent Triassic period, about 235 million years ago. But not only was Dimetrodon too old to be a dinosaur, it also belonged to a quite different group of critters. The dinosaurs were archosaurs or 'ruling reptiles'. Other archosaurs included the crocodiles, which are still with us, and the pterosaurs or flying reptile-thingies, which sadly have gone the way of all flesh. There were also a host of other archosaur groups that are more obscure and also long-gone. Archosaurs in turn belonged to a larger group called the diapsids or sauropsids. Modern sauropsids that are not archosaurs are the lizards, snakes, and the strange old Tuatara from New Zealand (which I hope to feature here some day). Extinct non-archosaur sauropsids include the marine reptilians, such as the ichthyosaurs of fish-lizards, and the paddling plesiosaurs and long-necked elasmosaurs. Diapsids/sauropsids as a whole are characterized by a particular feature of the skull: behind the eye, on each side of the skull, there are two holes or openings. They may have made room for jaw muscles to bulge outward without being restricted by bones. This simple picture is somewhat complicated by a number of groups of diapsids in which these skull openings closed up again, leaving just one or perhaps in some groups (turtles and tortoises, if they prove indeed to be diapsids) none.


Remember that all these fancy names are just our own attempts to fix a term with which we can speak of an entire group of related critters – and over the history of the Earth there have existed a bewildering variety of different kinds. Most old things we know only from the bones, so the names the scientists came up with to name and classify them, make reference to features of these bones, often the skulls and teeth.


Dimetrodon, now, was not an archosaur, nor was it a sauropsid. It belonged to another big group, the synapsids. These appeared very early on, in the Carboniferous, the period before the Permian. Initially they looked like lizards. Rapidly they increased in size and evolved numerous weird and interesting modifications. Dimetrodon was especially spectacular in this respect. The synapsids evolved into a huge diversity (and this is what I have indeed been covering here in my numerous recent prehistoric-critter articles) and one branch of them became the mammals we know and love today – including us humans! All the synapsids are also characterized by a feature of the skull, namely a single opening on each side behind the eye sockets. Even we humans still have it; it is the 'hole' through which the rear process of the lower jaw fits to make our jaw hinge. In Dimetrodon it was just a simple and round hole, about the same size as the eye socket. Synapsids, having evolved from lizard-like reptilian things, used to be called mammal-like reptiles. But seeing as they were already a well-defined group early on, quite separate from those that went on to become what we would call reptiles today – crocs and alligators, turtles and tortoises, lizards and snakes – it is perhaps better to drop the 'reptile'-bit and instead call them proto-mammals. 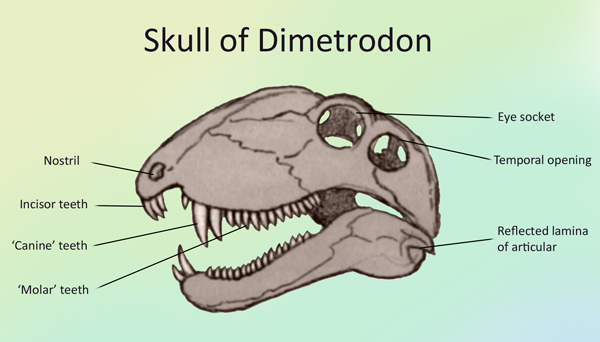 Dimetrodon means 'two-measure tooth', which refers to the fact that this old animal was one of the first that had teeth of more than one type in its jaws. Its teeth were roughly separated into front teeth (incisors), eye teeth (canines) and cheek teeth (molars), though they were all similar in shape, differing in size, the canines being the longest. This was the start of the entire suite of newfangled features that later appeared in the teeth of the proto-mammals and eventually the true mammals. Dimetrodon could use its front teeth to grasp, its canines to deliver the death-stab and to cut through thick muscle, and its small but sharp cheek teeth to punctured and shred its prey a bit, but it could not yet properly chew. Nor could it breathe while it chewed, since it didn't yet have a palate to separate its nostrils from its mouth space. It had to gulp down its meat in bigger-than-bite-sized chunks.


But it did have in its nasal cavity some bony ridges that were the beginning of what later became convoluted, thin sheaths of bone and cartilage that in true mammals support mucous membranes that serve to warm, cool and moisten inhaled air. Another very interesting feature of Dimetrodon's skull is that at the lower rear end of each lower jaw, there was a thin, outwardly-turned ridge, called a reflected lamina. This was the start of the mammalian ear! In old Dimetrodon this might have supported a primitive external eardrum much like that of a frog. But the bony ridge itself conducted some sound towards the middle ear region which was deep in Dimetrodon's skull. It wouldn't have been very sensitive and Dimetrodon likely only heard low-pitched, muffled sounds. But the process started, and soon the bones at the rear of the lower jaw became highly modified for sound conduction, in true mammals ending up as the delicate bones that convey sound from the middle to the inner ear.


While the skull of Dimetrodon is fascinating, most people will know it from the great big sail it had on its back. This sail was made of long, thin projections rising upward from each of its vertebrae. We have no soft tissue preserved of the sail. It is therefore a bit of a guess as to how the sail looked, or if indeed there was a sail and not just a series of tall backbone spikes. But there are some signs in the bones themselves that they supported soft tissue. Because the tips of the spines were often crooked, it may be that the sail did not extend all the way to the ends, instead leaving the tips free, as I illustrate here.


While the exact shape of the sail is a guess, it's even a bigger guess as to what it was for. In the past there's been a lot of talk of the sail being a heat-exchange device. If Dimetrodon stood with its sail side-on to the rays of the sun, it would quickly have warmed, and blood-vessels might then have carried the heat to the rest of its body. This means that it could have become active quickly in the early morning while its prey was still cold and lethargic. In the heat of day, it could have positioned its body so the sail was edge-on to the sun's rays, in which case the sail would have shedded heat, cooling the dimetrodon down. The problem is that we don't have any signs of the sail having had lots of blood vessels in it, which would have been vital for this theory to work. If not a heat-exchanger, the sail might have been for display. It would have been a great big billboard by which dimetrodons could spot and identify each other. A big sail might have been a sign of a healthy, strong male.


We also don't know what kind of skin Dimetrodon had. As a mammal-ancestor, it's sometimes illustrated as having had hair or fur, but I consider this very unlikely at such an early date. It might have had smooth, glandular skin, or it might have had rather lizard-like scales. There's evidence that some of its relatives had large, flat scales or plates called scutes on their bellies and undersides of their tails.


Older paintings of Dimetrodon show it crawling with its tail and belly dragging on the ground, its legs splayed outwards. But for long now we've had evidence suggesting something quite different. This evidence is in the form of footprints, made in soft mud that later petrified and so preserving for us a trackway, a sign of how a living animal moved. We are not a hundred percent sure the tracks were made by a Dimetrodon but the shape and size of the feet fit. Called Dimetropus (two-measure-feet) these tracks show the feet as having been held closer together beneath the body, lifting it so that the belly and tail didn't drag on the ground. This would have been a major step towards the high-walking gait of later proto-mammals and modern mammals.


The fossils of Dimetrodon were found in the United States of America and in Germany. These countries were not separated in the Permian, forming part of the ancient giant continent called Pangaea. In America, the environment in which it lived was swampy, like the Everglades in modern Florida, although the plants were of quite different kinds, ancient fern-like plants and horsetails. Different species of Dimetrodon ranged in size from quite small, 60 cm/2' long, to very large, almost 5 m/17' long. The smaller kinds would have eaten insects and small vertebrates, while the larger kinds took fish, aquatic amphibians, and some of the land-living animals up to the size of large herbivores like Diadectes (a reptile-like amphibian thing) and Edaphosaurus (a similar sail-backed proto-mammal). Dimetrodon could hunt on land or in shallow water, and also could dig dormant lungfish and other critters from the mud.


Dimetrodon represented the high point for the pelycosaurs, the most ancient of the proto-mammals. It died out without leaving any descendants. However, some of the related smaller and more humble-looking pelycosaurs evolved further towards mammal-hood, becoming the Biarmosuchians and the Anomodonts, the earliest of the therapsids.