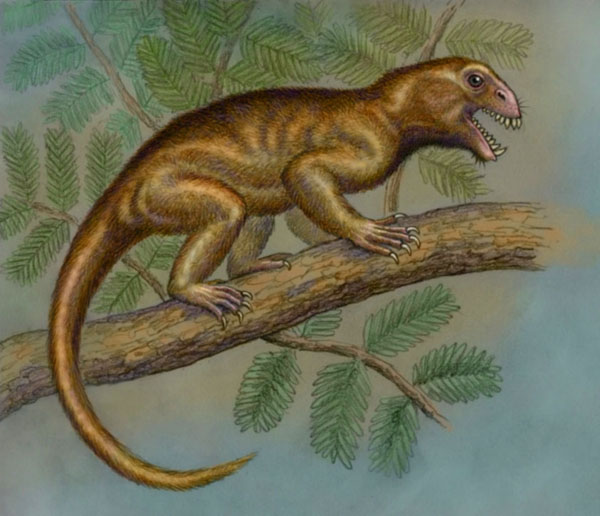 Back to our time machine! We leap back to the Permian again to investigate the evolution of the Anomodonts. This group yielded the highly successful Dicynodonts, typically two-tusked para-mammals that were amazingly diverse in the Permian and also survived into the Triassic, to compete with the earliest dinosaurs. But before we get to the dicynodonts, which may warrant two separate articles to do them justice, let's look at the more basal anomodonts – that is to say, the ones closer to the base of the family tree.


Basal anomodont fossils are known from South Africa, Europe, China, India, South America and Russia. This alone indicates that even early on, the group was very successful. Still, in their time, the middle Permian (about 270 million years ago), the continents were still joined into the huge landmass Pangaea, which made travel somewhat easier. It appears that the anomodonts were cousins to the large and strange Dinocephalians. They themselves were more conventional and generally much smaller. But they represent an interesting experiment in chewing. Anomodonts are characterized by a high arch to the cheekbones, allowing more room for jaw muscles. They chewed by a forward-backward or propalinal movement of the jaws, shearing their plant food into small pieces prior to swallowing. Jaw action became more specialized in the later dicynodonts, who gave up teeth in favour of a hooked, horny 'beak' and sometimes just a single pair of tusks in their upper jaws.


The most 'primitive' known anomodont is Biseridens qilianicus, whose fossils were found in the Qilian mountains of China. With a 20 cm/8" long skull, it was the size of an average dog. Only the skull is known, so the rest of my reconstruction is conjectural, but I portray it with the typical short, stout body known in some other large anomodonts. It had curved canine teeth in both jaws, and somewhat forward-pointing incisors. Like some other ancient para-mammals, it had small teeth on its palate as well. It might have been omnivorous or mainly herbivorous.


Tiajarudens eccentricus is a very interesting anomodont recently discovered in South America (named in 2011). Skulls and skeletal remains are known. Evolving towards a quite mammalian condition, its teeth were differentiated into spoon-like incisors, a huge pair of stabbing canines in its upper jaw, and high-crowned cheek teeth for grinding plant matter. It, too, had teeth on its palate, but these were flat and broad, to assist the grinding of the regular cheek teeth. Tiarajudens had a skull of about 22.5 cm/9" in length, and a compact, stocky body. It had additional ribs on its belly to support its abdomen.


The most amazing thing about Tiarajudens was its tusks. It was history's first true sabre-tooth. Each tusk was almost as long as the entire skull! Also, they were set well back from the front of the short jaw, meaning that there was no way for them to clear the jaw no matter how widely the mouth was opened. But they protruded well below the margin of the lower jaw and would have worked best with a stabbing action while keeping the mouth closed. As such, they would have served as defensive weapons, or might have been used in contests between males (or maybe even females, we wouldn't know). Here I have a sketch of a couple of animals wrestling and raking each other with their fangs. Although Tiarajudens was not a direct ancestor of the later two-tusked dicynodonts, in a way it prefigured them.


Otsheria netzvetajevi was a smallish anomodont (skull 10 cm/4") found in Russia. It had large eyes and might have been nocturnal, or a young animal. Its teeth were small and adapted to snipping plant leaves.


Another Russian anomodont was Venjukovia prima. With a skull 12.5 cm/5" in length, it was not very big. It had a deep, jutting lower jaw, giving it a don't-mess-with-me appearance. Its teeth were blunt and sturdy, with enlarged incisors (front teeth) and cheek teeth in several rows.


A highly specialized anomodont was Suminia getmanovi, also known from Russia, in the Late Permian, about 260 million years ago. Skeletons of several individuals have been found from what seems to have been a riverside community. I'm going out on a limb here and illustrating it as having been furry. It looks to have been quite active, so a fast metabolism and warm-bloodedness would not have been out of place. This little animal, the size of a squirrel, was apparently arboreal, the first vertebrate known for being adapted so. It had long, flexible fingers and toes, with sharp, curved claws. There are indications that it could oppose its thumbs to its other fingers, giving it a monkey-like grip. It had similarly off-set and potentially grasping big toes. Its tail also might have been prehensile.


The teeth of Suminia were somewhat triangular, larger in the front of the mouth than in the rear, with small serrations. They were adapted to snipping up leaves. There have even been small petrified droppings found, along with the Suminia fossils, containing leaf fragments. Constant chewing abraded its teeth rapidly, but it seems to have replaced them regularly. Suminia lived in what was already a quite ecologically-diversified environment, with various kinds of plants from small herbs up to sizeable trees, on which fed small to large herbivores, insects themselves eaten by insectivores, and small to large carnivorous critters eating everything else.


Other anomodonts were also very small and with unusually large eyes. These used to be called Dromasaurs, but are currently regarded as not necessarily all being closely related. Patranomodon nyaphulii was one of these. It is known from a small skull found in South Africa. Similar fossils were found in Europe, India and China. It had a short face, and dentition and cheek muscles well-adapted to chewing plants. 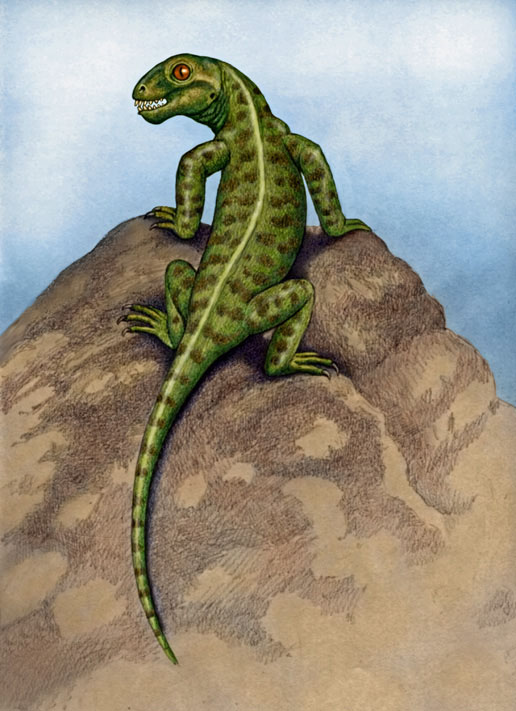 A small and lizard-like anomodont was Galepus jouberti, also found in South Africa. It reached an overall length of only about 30 cm/12", with a long tail. Its eyes were very large for its size, indicating possible nocturnality. It might also have been immature, the adult perhaps being much bigger. Its small, sharp teeth were not much differentiated and it likely ate plants, insects or both.


That brings us to the end of the basal anomodonts. Coming up, the remarkable diversification of the advanced anomodonts, that is to say the dicynodonts!