I can honestly say – and I have this in common, I suspect, with a number of friends and acquaintances – that I don't know quite what shape my life would be, in the absence of the works of John Ronald Reuel Tolkien. I probably don't fully appreciate the scale of their influence, for the same reason that it's quite hard to accurately gauge the size of an island while you're living on it. That said, I don't think I ended up living in Oxford solely because Tolkien resided here for much of his life, even though he has a palpable link with the city (much more so than Jo Rowling, not that this bothers the speciality tour operators and gift shop owners much). Anyway, it seemed entirely fitting to go and see Dome Karukoski's new film about Tolkien's early life, entitled (unsurprisingly) Tolkien, in Oxford. Tolkien is such a draw around here that the new film even managed to challenge the Marvel hegemony and land the biggest screen at Oxford's most distinguished city centre cinema.

Although there is a frame story which opens with Tolkien in the trenches of France, the meat of the film gets underway with his youth in the rustic idyll of a place called Sarehole (UK readers, feel free to come up with your own anagrams), but this naturally does not last long. With his widowed mother on her uppers and the family reliant on the charity of the church, it is still a shock when local priest Father Transporter Chief from Star Trek (Colm Meaney) has them all moved to grotty digs in industrial Birmingham.

Still, young JRR (Harry Gilby) soon makes friends with the better-off boys from the prep school he is sent to, and they swear eternal friendship and all the usual sort of thing, forming a club to discuss art and poetry and music and other sorts of culture (suffice to say that Wagner does not prove popular – ‘there's no need to take six hours to tell a story about a magic ring,' someone complains, one of the few flashes of genuine wit in the script). However, as the one-day-to-be Prof gets older (transforming into Nicholas Hoult along the way), he finds himself increasingly drawn to his adopted sister Edith (Lily Collins), despite the disapproval of Father Transporter Chief, who thinks he should be focusing on trying to pass the Oxford entrance exam.

Well, to cut a fairly long movie short, there is Oxford, potential failure, heartbreak, philology, and then the looming spectre of the First World War. It's all enough to give a man the idea for a best-selling (and that's putting it mildly) series of books…

I don't mean to be harsh to what is an undeniably pleasant and apparently well-meaning movie, but Tolkien is basically a con trick, trying to fool you into thinking things are in it which are simply not present. As everyone involved has taken great pains to point out, they don't have the rights to any of Tolkien's fiction – his most famous books were brought to the screen a few years ago, as you may possibly have noticed it – and so the film can only allude to them. (They don't even appear to have the rights to quote from Tolkien's gravestone, the text of which is referred to but not in any detail.) So much of the film consists of subtle little hints and references intended to put you in mind of something Peter Jackson did on a rather bigger budget in New Zealand, without actually being a direct steal.

The other problem is one common to many biopics operating in this particular sphere of the arts, which is how you make the life of a writer remotely cinematic. Writers tend not to have very interesting lives (well, except for maybe Hemingway and Steinbeck); the life of Tolkien, the part for which he is remembered, with him actually putting in the hours and writing out The Hobbit, The Lord of the Rings, and so on, was that of a middle-aged university don sitting in his study every night for years and years. How are you supposed to turn that into a film with any kind of commercial prospects?

Karukowski's answer to this is to put together a fairly predictable coming-of-age storyline which mostly feels like off-cuts from Dead Poets Society seasoned with a sort of lament-for-doomed-youth vibe, as the bold and bright (and mostly very rich) young lads grow up together before marching off to the trenches. Intercut with this is a conventional romance-against-the-odds plot as Tolkien must overcome his own limited prospects, not to mention Father Transporter Chief's resistance, and win the woman he truly loves.

You may be thinking 'this all sounds very generic' and you would be right. Karukowski's cunning way of giving all this Added Tolkien Value is load the film with sly little references, mostly to the Jackson films: we see Tolkien the boy playing in a landscape intended to suggest the Shire, and when the family move to Birmingham, it is a dark, hellish vision of looming towers, belching smoke and spouting flame (not sure the Birmingham Tourist Board are going to be wild about the suggestion their city is effectively twinned with either Barad-dur or Isengard). Young Tolkien can't see a tree outside the window without being inspired to start drawing Ents, and – in the film's biggest set piece – the feverish young officer witnesses the battle of the Somme and has a vision of dragons and wraiths devastating the British army. All the while on the soundtrack, Thomas Newman is trying to sound as much like Howard Shore as possible without actually being sued. As someone else has said, it is a bit like Shakespeare in Love but without the jokes; if this film were true, it's not really surprising that Tolkien wrote all those books, it must have been essential therapy for him.

But it's not true, and it does Tolkien the disservice of suggesting his whole life was essentially preparation for the moment he sat down and wrote the word 'Hobbit' for the first time. So much of what made Tolkien such an extraordinary man is entirely absent from the film – his extraordinary facility for language is touched upon, but many telling facts are omitted, perhaps for fear they would make him seem a bit weird: the fact he claimed to recognise archaic Anglo-Saxon upon first encountering it, his habit of referring to the Norman conquest as a relatively recent event, and so on. I've seen it suggested that Tolkien felt the Norman conquest essentially destroyed native Anglo-Saxon culture, and that his works were an attempt to provide a substitute for this – 'how one man, in his lifetime, did the work of nations,' to paraphrase a quote off the back of my copy of The Silmarillion.

There are moments in the film which do fumble their way towards a more authentic-feeling notion of JRR Tolkien – there's quite a long scene discussing his belief that the words cellar door are the most euphonious sound in the English language, and quite a long section where he and his mentor (Derek Jacobi) discuss trees, which Tolkien loved. They lift the film, but also suggest the possibilities of a much more interesting, but probably more cerebral and less commercial one, which this definitely isn't: Tolkien is basically the romantic lead throughout, albeit one whose walls appear to be covered with pictures from Peter Jackson's art department.

That said, the film is as well-mounted as you would expect, in the usual British hats-and-fags way, and it has to be said that Nicholas Hoult does the very best he can with a somewhat unrewarding part. The film clearly admires Tolkien and wants to be respectful towards him, but too often it makes the easy and obvious choices. The result is a good-looking but ultimately rather simplistic film that sometimes seems to be more interested in Tolkien's books (or, even worse, their film adaptations) than the man himself.

With Endgame having cruised its way to over $2.2 billion at the box office at the time of writing, one has to marvel at the scale of this achievement. Given the sheer variety and number of films that cinema-goers can choose between, it's all the more significant that everyone is opting to see this particular movie. 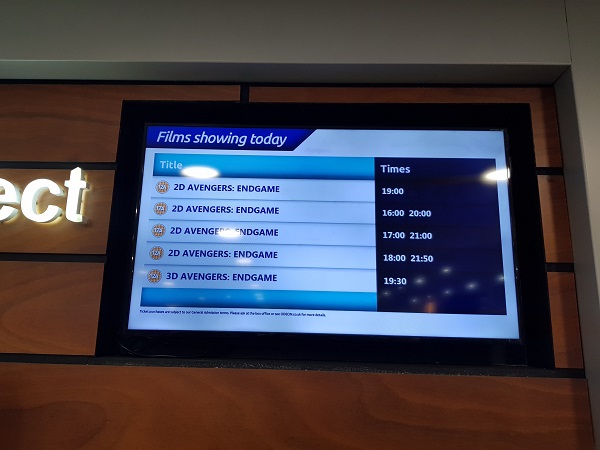 It's only films which are confident of finding an audience, or ones which are distinctly odd, that are venturing out into this unpromising landscape. Benedikt Erlingsson's Woman at War certainly qualifies for the latter category, being the tale of a longbow-wielding Icelandic choir mistress who sets out to strike a blow for the protection of the environment. Her cagey battle with the authorities to halt the march of heavy industry in Iceland takes an unexpected turn when she learns an application to adopt she made years before has been successful. What really matters to her?

The premise of the movie is off-beat enough, but when you add an identical twin, a running gag where the same tourist is repeatedly mistaken for our heroine and dragged off to prison, and a frankly weird conceit where the people providing the soundtrack keep appearing in shot (and occasionally interacting with the lead), it becomes clear that this film scores heavily on the ostentatiously quirky front. Well, at least it's a bit different, although the self-consciousness of it all gets a bit wearisome, the plot becomes increasingly preposterous, and what it's all supposed to mean is never completely clear. If nothing else, it is very likeable and has novelty to commend it.