Life on Other Planets, with Sir David Athenburgh 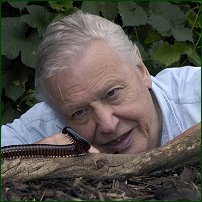 'Here, on the edge of the Zoogloid nebula, in a system composed of two super-giant planets and a central sun, are to be found several unique creatures. Today though, we are only in pursuit of one – the Aso-Aso. This flying ball propels itself by drawing in air from one end of its body and expelling it out of the other. While this is not its only strange feature, it is none the less unusual in a living being.

'Science has however been unable to examine its other peculiar habit – that of appearing and disappearing at will. Where it goes to we do not know but one second it is there and then in a flash it is gone. This survival tactic isn't pure invisibility as experience by dedicated naturalists has shown. Tracking devices have simply been left behind, when this creature has disappeared, in the few instances where they were successfully attached. Could they be teleporting themselves into another dimension? We simply don't know.

'It was thought at one time that they vanished from the surface of this world, to reappear on its sister planet but this was discounted because the other world was discovered to be completely devoid of life. Also of note is the fact that during the mating season, the courting couple as it were, would vanish, returning to this dimension with their young, almost instantaneously. It is as though they require privacy for the mating ritual and giving birth.

'Some biologists thought that they bred through binary fission as with single celled organisms but no proof of this has been found and indeed the very secretive nature of these creatures, means nothing has been witnessed to confirm this theory. It has therefore fallen out of favour and been dropped, quicker than a hot Bodlian Crotchet egg.

'On the other side of the planet, my co-presenter on this epic journey of discovery, the eminent botanist, Sir David Bellowme, will disclose the wonders or the legendary Oso-Oso – a man eating tree as opposed to the free eating man, Sir Bone Grills. Take it away David!'

'Don't you just love all that squidgy, squelchy water-soaked vegetation under your feet and running through your fingers? Well unfortunately, we are here to look for a fabled tree that doesn't actually exist, except in the fertile minds of local tribesmen, who also don't seem to exist. They led our camera crew here and have now skedaddled back to where they came from.

'I...What's that funny, hairy tentacle doing, wrapping itself round my left leg? Here comes another from what I assumed was just a local variation of the Araucaria-Araucaria or Monkey Puzzle tree as it is better known. I see the camera crew seems to be following the fleeing natives – come back, you cowards!'

'We appear to be having some technical difficulties with our link to the other side of the planet, so from all of us here at Life On Other Planets, until the next time, goodbye! '