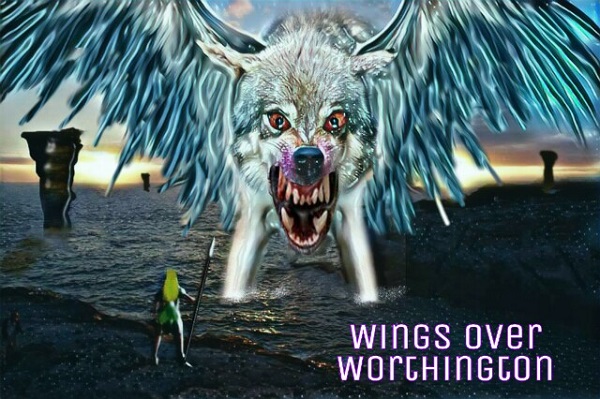 Inga sat on the cot, the two boys pressing against her sides, listening to the frantic beating of their mother's heart.

Lightning flashed again, illuminating the small room in brilliant blue-white light. For a split second she saw Sven across the room, sitting at his desk, headphones on, uselessly pressing keys and staring at the comms set.

She pressed both hands against infant ears as the thunder boomed and the shutters were rattled by another strong gust.

Four days they'd been barricaded in the office, food was low, and using a bucket for a toilet had quickly lost its appeal, even for the kids. Huddled in the darkness, praying for the storm to end, pleading for the pack to leave them be.

When would help come?

Sven cursed again, the green glow bobbing up and down frantically, then drawing close.

'The dish is down, stay here, lock the door after me, I'm going up to realign it.' He whispered, his tone begging her not to argue.

He handed her a walkie, kissed her and the boys.

Inga held his hand, following the green light to the door.

Taking the headset from her husband, she kissed him again and whispered, 'Be safe, my love!'

His reply was lost in the wind, as the door opened just enough for him to squeeze through, then closed again.

Inga dutifully donned the headset and felt her way over to the comms.

Interminably long minutes later, the walkie crackled into life, Sven's voice, hard to hear over the noise of the storm.

The sudden howling noise made Inga pull the headset away, even laying on the desk she could hear the terrible sound.

The green glow impassive as Sven's cries mixed with the howls, then, just static.

Static, then the heartbreaking sound of crunching bones.

The gunships landed at the cove three hours later, the sands littered with the bodies of hundreds of windwolves they had fought through.

The rescue team set about tracking the beacon, moving in well-practised formation, eyes on the skies, sweepers confirming kills with short bursts of automatic gunfire.

It didn't look good for the survivors, if in fact any had managed to live through the attack.

Rubble covered the shattered entrance to the office complex, the outer wall and door frames simple ripped away.

Flashlights picked out bloodstains on the wood, a dead Alpha, teeth bared even in death, claws extended through the opening.

Another confirmation burst as the team picked their way into the devastated building.

Weapons swung to the right as the figure came from a darkened corridor, blocked and wild-eyed, the woman screamed at them, begging them to save her family.

Medics whisked the woman back to the transport, a quick sweep, no other survivors. Ten minutes later the gunship took to the skies, battered by the storms, heavy weapons blasting a how in the swarms.

Inga stabbed a finger at the map.

'There, they have to be there!' her nail resting on a cluster of three small dots in the ocean. Thirty clicks East from the Cove.

The last standing Eyries on Worthington.

'It didn't kill them, see?' She sobbed out the next words, 'The monster had already, it had...fed, Sven, my husband….so it wasn't hungry? They take their prey back to the caves, keep them for...later…oh, my poor babies!'

'If they're there, we'll find them ma'am, you rest, we have a team ready to go, try and get some sleep, that's a nasty gash you have, rest, we'll be back asap!'

Inga pushed herself up from the infirmary cot, picking up her spear, Sven's fishing spear, she stood defiantly.

'They're my boys, no way are you going there without me!'

The look in her wild eyes brooked no argument.

'Stay at the rear, don't get in our line of fire, let's saddle up, folks!'

The pack had taken wing and flew out to engage the foe, but these foreign monsters had spat light and metal, killing their brethren without teeth or claws, death from afar had arrived at the eyrie.

The seas roiled with the storm, reddened with the blood of the pack. Others would come to their calls, flying from the headlands, back to protect the queen, but would they be in time?

The caves shook with the beat of the strange wings of the attacking beasts, throbbing through the eyrie, even over the howls of the Alphas.

Sharp noises, cracks like thunder but alien to the windwolves' ears, as the beasts seemed to birth smaller beasts, the two-legged monsters also spitting death to the guards on the eyrie.

In the meat caves, their stock shouted out towards the monsters, strange sounds, unusual for meat, different to the usual bleats the meat made.

The Alphas made to move towards the meat, protecting the queens food, but she merely growled a command for them to remain with her, protect her.

They whimpered as they realized the command was tinged with something they'd never heard from the queen, never imagined her capable of. Fear! Worryingly, their queen was afraid of these two-legged invaders and their flying beasts.

The squad moved easily down through the caves, no further wolves stood in their way.

Their landing had, once more, been hard-fought, only four Rangers and the female colonist remained. The others had died well, taking the pack with them, securing the landing site and the hope of a rescue.

Spirits lifted as the howling ceased and they heard human voices from below. Survivors!

Two dozen colonists and tourists stood in the cavern, men, women, and, thank god, children cheered when the Rangers broke through.

They were quickly escorted back to the gunships. Rotors whined as the engines powered up to take off speed.

From the caves two huge Alphas burst towards them, howling in rage, hackles raised, fangs bared.

Wings began to unfold as the animals charged. The first gunship was ripped to shreds, cartwheeling through the air as it tried to take off despite the damage. Striking the rock, rotors shattering, the ship plummeted down into the churning sea.

The big guns swung towards the wolves, cutting one down mid-air, the weight and momentum of the beast carrying it through the cloud of bullets. Smashing into the gunship, both fell over the cliff's edge, spinning down into the water.

Howling in rage, the remaining Alpha lashed out, caught between two gunships, it stood no chance as the crossfire took its toll. A last, desperate swipe of its claws sent one of the ship's crashing into rock, bursting into flame.

Silence fell as the guns stilled and the remaining engine shut down, the damaged ship hopelessly incapable of flight.

Inga stood with her sons and the two surviving Rangers, winds whipping her hair.

She hoped, far out to sea, that the battle was being won, dared not think what would happen if the skies should suddenly be filled with a returning pack.

For now, at least, her boys were safe on the eyrie, safe and with her again. She hugged the boys, watching the Twins rise on the horizon, praying that this dawn would see Worthington free of the scourge of the Windwolves.

Her thoughts were shattered, as, deep beneath her feet, the queen howled.