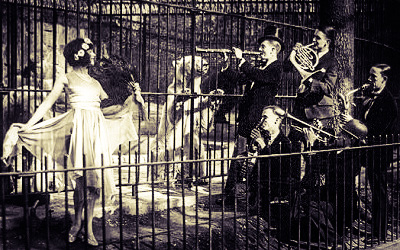 The Post Editor got a really cool Christmas present: a stack of old sheet music. This has led to a new video series I'm calling 'Jazz Babies Concerts'. This one is a singalong. Learn the outstanding lyrics, please.

All day long I sing a song,

I sing a song because nothing's wrong….

Irving Caesar was born Isidore Keiser in New York City in 1895. His dad was from Romania. He grew up with the Marx Brothers. His lyrics were usually better than this: he wrote the words to 'Swanee', 'Sometimes I'm Happy', 'Crazy Rhythm', and 'Tea for Two', which was a best-seller. My personal feeling is that the team just had to come up with a song before they left work that day, and they were desperate.

Cliff Friend (1893-1974) came from Cincinnati, Ohio, where his father was first violinist in the orchestra. Along with this deathless tune, Cliff composed 'The Merry-Go-Round Broke Down'. You know this song, but you don't know you know it. Ever watch a Looney Tunes cartoon? It's the theme song. Look it up on Youtube.

Both of these guys worked in what was called Tin Pan Alley, a stretch of West 28th Street between 5th and 6th Avenues that was home to thousands of pianos, all playing at once. This is apparently where the name came from. Can you imagine the sound of hundreds of thousands of jangly piano keys going all at once? Worse than hip-hop. Anyway, Tin Pan Alley was the hit music factory of its day: New York City's Motown and Nashville rolled into one. Fortunes were made on sheet music, I kid you not. I'll tell you more as we go along.

In the meantime, enjoy 'My Blackbirds Are Bluebirds Now'.

Click here for the video, or watch the embedded version in your Pliny-skin page.