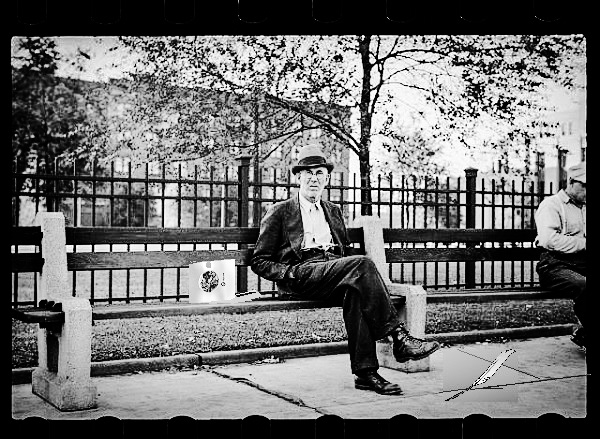 An ageing failed Writer sits on a bench opposite the pizza place, searching for inspiration.

He has tried many writing styles, political, satirical, poetic, prophetic.

All have been rejected.

A man in a pinstripe suit with a white feather pinned to the lapel, peers at the menu board then looks around as if expecting someone.

After a few minutes he heads inside.

'Can I join you?' The voice from behind startles the Writer.

He reluctantly moves along the bench to accommodate a young man wearing long black antennae and a t-shirt saying Visitor.

The Visitor unwraps a cheese roll.

'I don't suppose you've seen an Angel in a suit passing by?' he asks, in mid-mouthful. 'He'll be wearing a white feather to represent wings. We were meant to meet around here for lunch.'

The Writer points to the door of the pizza place.

'OK thanks. Could you look after my antennae for a minute? Last time I wore them in a restaurant the waiter thought I had escaped from the ant colony which was currently infesting the kitchen.

He disappears without waiting for a response.

The Writer sighs wearily and prepares to walk away from the antennae which have been placed carefully on the bench.

However, something inside him gives way, and with solemn dignity he places them on his head.

'I'm promoting my new fashion label,' he explains to a group of bemused tourists. 'You see, I'm a designer named Anthony, but my friends call me Ant.'

'Very funny,' says the Visitor who has reappeared with the Angel and a pizza. 'You should join our theatre company. We're currently doing a show in the Arts Centre about outsiders trying to find home. We like to wear our costumes around town, as a preview.'

'As a warning more like,' replies the Writer, returning the antennae. 'As for me I'm already playing the part of Failed Writer, no disguise needed.'

The Angel looks at him quizzically. He is much older than the Visitor, with noticeably bright eyes.

'Who are you when you venture onto the stage of your page?' he asks in a low whisper, as if protecting a secret.

'For years, all I desired was the adulation of the audience.

One night my pride began to melt under the white heat of the spotlight.

I spluttered my lines as if I was a dying candle offering its final drops of flickering light. In these moments between life and death I gave my finest performance.'

'And he's been scaring his audience ever since,' says the Visitor. 'Talking of which, it's time to go, we'll be late for our show.'

'Tricksters,' mutters the Writer as he watches them walk away.

Six months later he has a short story published in a magazine.

This story is about a writer who craves recognition, he explains in his introduction.

Broken by endless rejection, he embarks on an arduous journey to the heart of his art, meeting curious characters along the way.

My work is dedicated to the Angel, the Visitor and the Ant within us all. (Wings and antennae – optional.)

In an Arts Centre cafe in some other town, the Angel sees the magazine on the counter, and smiles wryly.