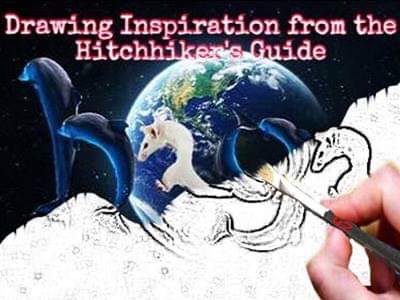 Back in 1999, when The Hitchhiker's Guide to the Galaxy: Earth Edition first got its start, its founders had some interesting goals in mind. Author Douglas Adams had a few ideas about how the Guide would work, and what it might be good for. Basically, it was about bringing people together and seeing what the possibilities of the internet were. But it was a pretty open concept.

Twenty years down the pike, we're still working on that open concept.

The internet has taken a few turns on the way: various forms of social media have been launched. Some of them have been 'weighed in the balance, and found wanting'. We're still here. We're still working on the Guide to Life, the Universe, and Everything. There seems to be no end to what we can learn. The more we know, the more we want to know. The greater our knowledge, the more questions we have. So it goes.

This month, we'd like to ask you a specific question related to your personal involvement in our mutual project. We're assuming, for the sake of argument, that you've run across the works of h2g2 founder Douglas Adams somewhere along the line. You've read one or more of his books. You've seen the Hitchhiker movie, or the television miniseries, or heard the original radio series. Maybe you enjoyed the Doctor Who episodes he helped script. Or you've just read what he wrote on h2g2. At any rate, we'd like to know about your reaction to this author's work.

Let us be clear: we're not asking you to 'be a fan'. We don't want to know what your favourite character in the series is, or how you named your pet hamster Zaphod1. We want to know how the ideas in Douglas Adams' works translated into action.

Write us an essay. Or turn it into a photoessay or video. Sing about it. Or build a Guide Entry around the aftermath. We're not particular, as long as you share!

1Guilty confession by Post Editor. Zaphod was a teddy hamster, and he turned out to be a girl hamster and to have a rather bad temper.