Please Sir, Can I Have Some Morgue? 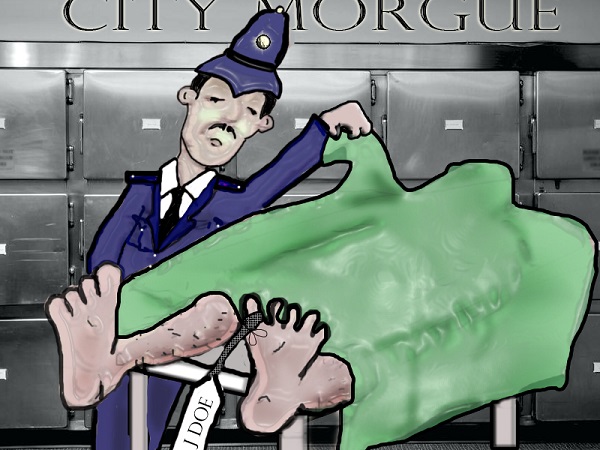 The older cop paused before entering the low concrete building. Lighting up a cigarette, he addressed the youngster at his heels.

"O.K. Mark, all you have to do when they arrive is your checks and the exhibit label, got it?" He grinned through the Lambert and Butler cloud as he saw the nervous look on the Probationer's mug. Bloody recruits were hardly out of nappies these days!

The black van backed up to the shutters, driver nodding to the Officers.

The young lad's face whitened further as the smell of the morgue hit him, Christ, he actually preferred being gassed by Steve's forty-a-day habit.

The morticians wheeled in the body, green covering looking sickly in the strip lights.

Steve seemingly took pity on the lad, "It's alright, son, always hard the first one. You just watch me instead, eh? I'll still sign you off, don't worry about it."

Mark sighed a deep sigh of relief, just as the radio blurted into life.

"Apologies Control, In Company with Probationer at Sudden Death at the mo, give it to Two Three?"

"Negative Steve, Two Three engaged arrest in Saint Helens, leave your sprog to deal at the morgue and make Dock Road job, over".

"Sorry, mate" Steve gave an apologetic smile as he fished his keys from his hi-viz, "All yours after all, I'll be back in half an hour, kitchen's through there, do him, then grab a cuppa, eh? Let us out please, lads" and with that Mark was left alone with the first dead body he'd ever seen.

He checked the tag and gingerly lifted the cover, shocked to find that the stiff was still warm as he struggled with his nerves and eventually tied the tag to the big toe.

That was the easy bit, now for a quick check over to verify there wasn't an axe sticking out of it's head or something else that would indicate foul play, then a nice brew. All over in two grim but necessary minutes. He supposed he'd get used to it as just another unsavoury part of the job after doing a few more.

As he gripped the cover, the lights went out and, in the pitch blackness, a hand shot out and grabbed his wrist.

Mark was still screaming as the lights flickered into life and stared uncomprehendingly at his new colleagues, peering in through the observation windows, laughing their heads off.

The 'corpse' rolled his trousers legs down, slapping Mark on the back as he went to retrieve the rest of his uniform.

"Welcome to Nights, son, and welcome to C Division!"

The audience burst into applause as Mark bent double and promptly threw up!

Eighteen months later Mark begged Steve to be in on the wind up. A new Probationer, the obligatory prank on nights and maybe, just maybe, they'd move on to someone else and forget his initiation.

The following Wednesday, (actually on Hallowe'en too, bloody perfect!) Mark stood rather self-consciously in the morgue. Shivering slightly. Not unexpected behaviour if you tended to frequent morgues dressed only in your underpants.

"O.K Huey, bit different to last time. We were thinking it would be a laugh if we put you in the fridge", he ignored the look, "Then, when, whatsisname, erm, Lee, yup, when Lee pulls the drawer out, you sit up and give him the shock of his life! Real laugh, better than yours even, hope he doesn't hurl, though!"

With that he winked and pushed Mark into the refrigerated lockers, adding, "Remember Hue, don't move 'til you get pulled right out again!"

As the doors shut, and the cold and dark enveloped him, Mark grinned as he tried to control his heartbeat. This was going to be a hoot!

He could hear nothing outside and see nothing inside the fridge.

Fishing his lighter from the waistband of his undies, (be prepared as they say!) he flicked it into life and checked his watch. Bloody hell, twenty minutes, how much longer now?

Holding the tiny flame up over his chest, he turned his head to the right, three empty metal trays.

As he turned to his left, he was met with the wide eyes of the body next to him.

"Bloody cold in here, isn't it?" The corpse grinned at him.

He nearly kicked the doors off the locker as his screams and the laughter of his colleagues echoed around the morgue.