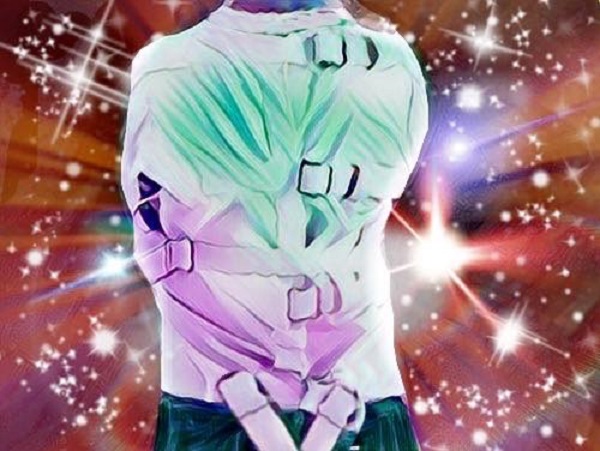 Lee took a deep breath, uncomfortable in the unfamiliar suit, and as the holo-nurse swiped the lock, he stepped forward into the unknown.

The MDT panel sat around in a seemingly friendly, non-threatening group. The chair offered looked apparently comfortable. The holo-shrink held out a hand behind a fake smile.

"Lee, welcome, how you feeling?"

He seemed to feel the chair envelope him as the questions were generated by the Unseen.

Twenty minutes later he was apparently led back to 'his' bedroom, the assessment had apparently gone as badly as he imagined it may have done and he had been detained again. Section extended. Nightmare prolonged. Lies resumed.

Lee pulled the apparently white linen over his head and waited for reality to solidify around him.

Data within parameters. Experiments to move up a level.

Reactions to contact to be observed and all necessary adjustments made.

The System, incapable of impatience or boredom, hope or fear, merely collected data and responded.

Chang awoke, uselessly trying to recall non-existent dreams. A nagging doubt lingered in his mind, and then was gone, as the drugs kicked in.

His monitors scrolled reports, all in the green.

So why was he awake a week early?

His eyes flickered to the Comm screen, unused and unusable for years now.

He struggled to accept the information.

Impossible so deep into space, so far away from another human being?

Goldilocks still millions of miles away, and uninhabited anyway.

Struggling to remember how to use the Comms, Chang ran diagnostics.

The device was working perfectly.

Someone or something out here wanted to say hello!

His heart raced as he subconsciously tidied his hair and waited for the incoming signal.

Lee tried for the fourth time to get his fringe to behave, but apparently it had different ideas.

His heart raced as the holo-nurse led him down into the reception area, doors seeming to click open and closed, punctuating his journey.

The holo-nurse appeared to smile kindly, hand doing a passable imitation of turning the one non-electronic door handle in the building.

"Good luck, Lee!" She whispered as the door swung inwards into the apparently homely-looking visitor's room.

There, not two yards away, his wife hastily getting to her feet, her handbag apparently knocked over in her rush, makeup and mints apparently spilling out, trying to reinforce the lies.

Lee screamed as the deception reached out to hug him, fear in his eyes reflected in those of the lie crying against his outstretched arms.

Minutes later he was back in the room, sedated and restrained, screaming at the fake staff to release him, stop this mind-bending torture and let him go back to his ship, didn't the Unseen realise, he had a job to do, had get his family safely home.

Disappointing was not a word the System understood.

The subject had performed irrationally. Predicted outcomes not achieved. More data was needed.

The System would prevail, or the subject would be discarded, and the experiments retried. A different species may be required if this subject proved inadequate? Only the data would tell.

Contact would be established satisfactorily or not at all.

Frustrated, Chang ignored the meal the ship provided, further ignored the helpful advice that his body showed deficiencies in several nutrients, vitamins and enzymes and that he should absorb the nutrients provided.

Three days now he'd been staring at the screen, computer banks on overtime as they tried to decipher the message.

Incomprehensible noises and images. Symbols flashed across the screen, twisting around each other, writhing in a serpentine electronic dance.

Nothing was familiar, not one piece of data could be understood by man or machine.

No patterns. No repeated symbology. No recognisable cadence or meaning to the noises.

Yet, still, Comms assured him that this 'message' had been transmitted straight at the ship (origin Unknown) and was not merely some jumble of interstellar white noise and bits of random electronic code floating around Eternity.

There was a message to be received, he just needed to understand it.

Lee stared at the computer screen in the holo-nurses' office.

Incomprehensible images assaulted him, tortured him.

There, in glorious HD, there appeared to be a family.

Two children, blew out the nine candles, smiling into the camera as they whispered twin birthday wishes to each other.

A boy and a girl, identical but for their hair.

He couldn't grasp the lies they were trying to tell.

The one lie the Unseen had failed miserably in spinning. His twins were five years of age.

These phantoms masquerading as his kids disgusted him. What could the Unseen hope to gain from such an obviously false scene.

The twins held out their hands to the camera, badly drawn house with four badly drawn people. 'We love you, Daddy, please come home soon,' badly written in childish felt-tip on the paper.

"That was Saturday, Lee”, the holo-shrink coaxed, "They're growing up fast and need their Papa."

Lee pushed himself away from the desk, wanting to get back to his apparent bed, close his eyes and dream of his real kids, still infants, and so very far from here.

That was it, four years, a blink in the scheme of the System's plan, but that was it.

The subject was released into the wild and data carefully stored for the next trial.

Chang climbed from the pod, noticing the numbers had all but burnt off on entry, ah, well, 87 was a good number!

He stood tall, taking deep breaths of air that was scented with something not unlike jasmine.

Stepping through the high meadow, he located the three others amongst so many.

Together at last, Chang stood with his wife and the twins, arms around each other and gazed up at the beautifully new skies.

"Interesting study. Lee's six-year illness had manifested in the belief that he was actually on board an interstellar star ship. His spouse of twelve years and their five-year-old identical twins were in some kind of stasis, awaiting a time they arrived at a safe haven and could be reunited to start fresh lives.

More interesting was Lee's belief that he had been abducted by extra-terrestrial beings at some point and had been subjected to a series of 'tests' whereupon a holographic universe was created with the sole purpose of forcing him to accept a family that he believed wasn't his own.

The breakthrough came when Lee was shown his own children's ninth birthday party footage. I believe this has triggered an acceptance of reality.

However, in Lee's mind he has successfully passed this cruel experiment and has outwitted the 'System' by recognising a flaw in the plan!

Lee has eventually responded well to medication and CBT, I am pleased therefore to recommend the conditions of his Section be dropped and that he be allowed to return home. I'm sure we all wish him and his family well in the future".

The specimen lay suspended in sea temperature gel, primitive but fascinating in its simplicity.

Energy flowed through the gel, seeping into the organism, probing, stimulating the specimen.

The dolphin slept whilst the System worked on, trying against all odds to get the message through.