SAYSF: Chapter 4 – I Will Deliver Him to You 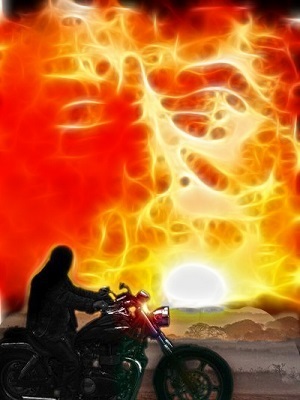 "Some non-believers say it was a freak accident of nature, or a fuel dump explosion, but, still others believe the Devil himself came up the mountain to claim Him that morning.

One thing we do know for certain, sunrise that day saw over six hundred Riders, all Seekers of the Free Way, embark on their Final Run.

Just as the old religions had their Judas, so too was there a betrayal on the hill that morning.

Only fragments remain of the original account, recorded in archaic MPEG American. Scholars now believe that only one third of the infamous 'Book of Frank' remains.

So, look carefully, and tell me what you see."

Lights dim in the vast auditorium and all eyes are riveted to the display.

Grainy green images as the bodycam focuses. A female in her twenties, dressed as a Rider, blonde, checks the lens and mutters "Good to go Frank."

Static. Image cuts to the Hilltop. Hundreds of motorcycles. Riders nowhere to be seen.

Voice of Frank, "Zero Four thirty-seven, (static), seem to be moving (static)...believe it to be Tango" camera pans to smiling blonde, "(static)...odename MacLeod…."

Image jumps to crowd of Riders, laughing and cheering, gathered around a central figure. "(static).....do you see, my brothers and sist...(static)"

The auditorium gasps as they realise they are actually seeing and hearing the Seeker Himself.

"Target sighted and identified, repeat we...(static)..eyes on Tango One!" Frank the Betrayer's voice sickening in his joy and excitement. "All Units move in, be aware Agents on site, repeat ....(static)....caution, Agents on site!"


(static).....cuts to the Seeker, much closer, colour replaces infrared, as predawn light improves and glints in piercing blue eyes, otherwise a quite unassuming figure, no different to the other Riders, but those eyes told of hidden Truth.

Glowing sword captures the dawn, arcing towards the bodycam, another shot.

Blue eyes smile, the bullet, suspended in the glow, stops midair between the Betrayer and the Sword, the Seeker reaches out, plucking death between finger and thumb of his left hand admiring the beauty of the round.

Sword strikes the earth, driven down by His right hand.