The Donaudampfschifffahrtsgesellschaftskapitäns-töchterentführungsgesetzvollstreckungsbeamter and the Vegetarian Vampire: A Saga of the Astro-Hungarian Empire

Part I: Investigation in Móhacs

Rising in the Black Forest, where the tasty ham comes from, the Danube (second-largest river in Europe after the lugubrious Volga) flows majestically through many exciting metropolises: Ulm (in and around), storied Deggendorf, home of the world's best Knödel, stately Vienna, which houses the Strauss fanboys. Then the spelling gets worse: there's Bratislava, Mosonmagyaróvár (we're in Hungary now, can you tell?), Budapest, recently cobbled together from Buda, Obuda, and Pesth, and we hope the glue holds, Croatian Vukovar, Serbian Kremski Karlovci and more familiar Belgrade, Bulgaria's Nikopol, its striped church reigning over the chalk cliffs along the river, on into Wallachia, the river's largest port city, Galati, the blue waters ending their epic journey, exhausted, by falling into the waiting arms of the Black Sea. The river is tired, and so are we. But most of this real estate – at least until the independent kingdom of Serbia and the ever-unique Bulgaria, where we begin to wander into Russian territory – belongs, in the Year of Our Lord 1888, to that royal and imperial political perfection known as Austria-Hungary. Diversity is its watchword and the Danube its river. Look on its works, ye mighty, and despair: AEIOU1!

Of course there are steamships.

The Donaudampfschifffahrtsgesellschaft is no paltry undertaking, no, indeed. Nothing like those cowboy-and-Indian steamboats on the vulgar Mississippi. Would-be writers such as that yahoo Mark Twain need not apply: the steering-masters of the Danube are serenely competent. Their sons grow up to be steamship captains, following in the damp but weighty footsteps of their fathers. They have wives and daughters of beauty and dignity, who support the family occupation. So important is their status that it is noted on their tombstones: august, indeed, is the widow's headstone inscribed Donaudampfschifffahrtsgesellschaftskapitänswitwe. There are lessons to be learned in the Vienna cemetery.

Thus it was with alarm that the kaiser-und-königliche authorities noted an unhappy trend in this year of 1888: the frequent disappearance of Danube steamship captains' daughters as they reached marriageable age. As long as the river flowed through orderly German states or noble Austria, the daughters stayed demurely on board their steamships, But once past Deggendorf, some as-yet-unknown danger lurked. Already in Slovakia, the disappearances began; their number grew as the ships halted in hard-to-pronounce ports through the Hungarian puszta; the roster of missing daughters swelled alarmingly through Bulgaria and southern Romania. Notably, these disappearances were more frequent in towns with reliable railway service…. Officialdom was confounded. They called in an expert: the Donaudampfschifffahrtsgesellschaftskapitänstöchterentführungsgesetzvollstreckungsbeamter. For (naturally) there was a law protecting daughters of Danube steamship captains from abduction. And if there was a law, there must be an official in charge of enforcing the law, a Gesetzvollstreckungsbeamter. He it was who would get to the bottom of this outrage: it was, after all, his job. There was a German word for it, and therefore, it would be done. 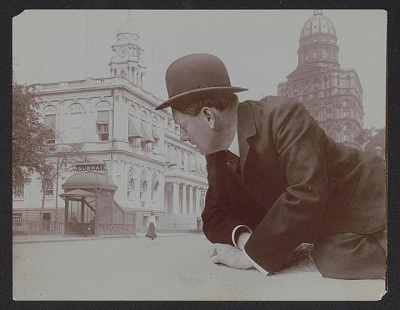 The Herr Donaudampfschifffahrtsgesellschafts-kapitänstöchterentführungsgesetz-vollstreckungsbeamter Schmitz (for such was his plebeian name) stepped, not from the deck of a steamship, but from a train in Móhacs on a cold day in February. Schmitz did not shiver, although it was cold; Donau-etc-Beamten2 do not shiver. Setting his unassuming bowler hat in place, Schmitz picked up his carpet bag (Donau-etc-Beamten travel light) and headed in the direction of the nearest mid-priced hotel.

'Szervusz,' the innkeeper greeted him.

'Ah! I see the gentleman is Austrian.' The innkeeper switched quickly and effortlessly to German3.

The Donau-etc-Beamter signed the register, presented his identity papers, which duly impressed the innkeeper with all the official stamps and titles, and secured the recommendation of a good restaurant nearby. After a quick wash-and-brush-up, Schmitz decided to head for the Gasthof Hegau for a Pilsner and some goulash. He stepped out the door to the main street….

….and into chaos. There was shouting, dancing, and jolly accordion music. Polkas. And the street was full of hairy demons, like demented horned sheep, with ferocious, painted expressions.

'Was zum Teufel?' he shouted involuntarily.

A chorus of amused voices came back, 'Busójárás!'

Verflixt und Mist. It was impossible to escape Carnival, even by going east. He'd probably have to go to Istanbul to avoid it, or just wait until Ash Wednesday. In the meantime, jolly masked dancers continued to celebrate either the fight against Winter, or the time they scared the Turks away with spears, drums, and scary costumes, take your pick. Possibly both.

Schmitz elbowed his way through the merry (and quite musical) melee in the direction of the Gasthof, goulash his goal. Maybe they'd have some good Butternockerl….. Ahead of him in the crowd, though, he saw an unusual – and, to his mind, suspicious exchange between one of the Busós and a young woman in local peasant costume. As she leaned over to shout pleasantries to the dancers, she also took a note from the bosom of her embroidered blouse and slipped it into the dancer's hand. Does your mother know you're out? he wondered. He couldn't help it. Years of following Dampfschiffahrtsgesellschaftskapitänstöchter had made him very suspicious when it came to teenage girls. Finally, he reached the Gasthoff Hegau, and slipped out of flow of foot traffic and into the quieter bustle of food and drink.

The first thing that hit him was the powerful aroma: savoury and sharp, garlic mixed with paprika. A less-than-obsequious waiter showed him to a table for one, where he took in more of the atmosphere. To his initial relief, the accordion noise of the street polka had abated. But what replaced it was worse: czardas. Gypsy violins, guitar, and a pan flute. He shrugged. Not a Strauss waltz, but one couldn't have everything. He ordered beer and goulash – he was in luck, it came with Butternockerl – and looked around the room, which was filled with patrons, eating, drinking, gossiping, and listening to the music.

To his surprise, Schmitz recognised one of them: the sheepskin-clad Busó from the procession. Without taking off his garish mask, the figure sidled behind the musicians' stage – surprisingly stealthy for one so conspicuously clad – until he came to another table for one in the far corner of the Gasthof, where a tall, thin man with dark hair was sitting over a plate of what looked to be mamaliga and sour cream. He was listening to the music with apparent enjoyment. The stranger – well-dressed in Hungarian fashion, and with a rather aristocratic look about him, privileged and careless, in spite of the peasant meal – seemed to pay no heed to the Busó as he passed. A less observant man than Schmitz might have missed the hand-off of what he could have sworn was the same note the Mädchen had passed in the street. Curious, he thought. Without ever looking directly at the Busó, the dark-haired aristocrat slipped the note into his sleeve. Then he did a more surprising thing.

He got up on the stage and played piano. A duet with the pan flautist. Schmitz shrugged. It takes all sorts, he reckoned. The goulash wasn't bad, though. Schmitz determined to keep an eye on this restaurant and its curious musicians. At least, he wouldn't starve. He ordered another beer.

Schmitz on the Prowl 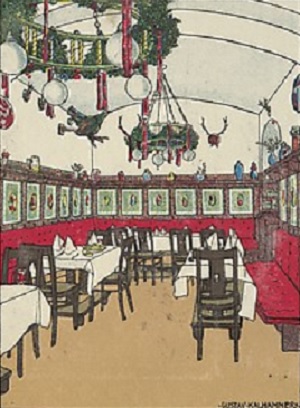 The next night, Schmitz tried the töltött káposzta. Can't go wrong with meat and cabbage. And beer. The beer around here was very good. The mysterious dark-haired aristocrat was there, too, eating a plate of grilled vegetables. What was wrong with the man? He stayed a long time, and Schmitz stayed to watch him, wondering what he was up to. From time to time, messages arrived at the table, brought by men in peasant dress, or by the gypsy musicians. There was definitely something going on.

It was late when Schmitz got a break in his case. There were only a few diners left, and Schmitz was on his fifth beer. The musicians were taking a break, sitting in the far corner with wine and smoking pipes (even the woman who played the pan flute, grässlich.) A peasant came in with a young woman. She was wrapped in a heavy sheepskin coat, the collar pulled up to hide her face, but as she passed, Schmitz suppressed a snort of surprise: he recognised the girl. She was Marina Lübbitsch, one of the missing Kapitänstöchter Schmitz was looking for. What was she doing in Móhacs during Busójárás? And why was she headed straight for the mysterious foreigner? The mysterious foreigner who was standing up and bowing to her? And why were all three now slipping out the back door of the Gasthof, whither Schmitz must now hurry if he were not to lose sight of them? He threw down some coins for the beer, seized his hat and coat, and hastened out the back way.

The rush of cold night air made his skin tingle with the chill, but not for long. Because the club on the back of his neck rendered him unconscious within seconds.

1AEIOU=Alle Erdreich ist Österreich Untertan or Austriae est imperare orbi universe, take your pick.2The author has given up and will now use abbreviations. The English language cannot stand much more of this sesquipedalianism.3Yes, we know they're pronounced exactly the same. We were trying to make a joke.