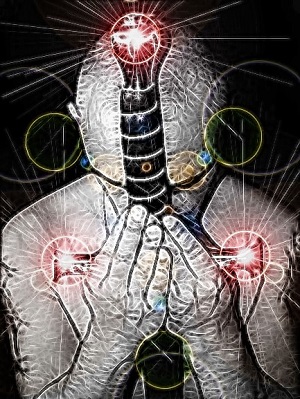 The young girl blushed as she held out the small bowl of food.

The old man, so very old, gratefully held out a hand, the aged leathers creaking as loudly as his joints.

His faded colors, S.A.Y.S.F, marked him as a Holder of Majick, the heavy sword as Defender of the Free Way.

Ancient hands bowed a thanks, then that smile, blue eyes twinkled as the biker-monk held up a small berry.

The blush deepened, "It's just a blackberry, sir."

He held the fruit to the light, marvelling at the sight, consumed by the majick.

"Just a berry, child" popping in into his mouth, "but a bloody juicy one! Thank you, and may your road always be a twisty one!"

The girl ran off, thrilled to have had such a fine blessing.

He watched her go, picking out a particularly bright fruit, turning it over and over in the sunlight, marvelling at the majick.

The old man sat for a few more hours, the brilliant glow from his bowl lasting way into the evening.

Climbing up through ramshackle villages, enjoying the pull of the bars on his arms, sword tapping time on the frame, he realised he was hopelessly lost.

Smiling at this good fortune, he pulled the bike over at a dimly lit and rather seedy looking tavern, the scent of adventure shimmered in the air.

Two men, tanners by their dress (and unique smell), crouched by the doorway, playing dice in the dim light coming from within, coin exchanged hands as the ivory was cast and bets won and lost.

He edged around the pair so as not to interrupt the game, marvelling at the ancient wood of the doorframe, swirls and knots polished by hundreds of years of patrons, the patina of time beautiful to those that Sought.

A calloused hand reached out and grabbed his boot in a vice-like grip.

He smiled down at the shaved head, appreciating the blue tattoos, faded but intricate on the tanner's skull.

"Evening, brother, just need directions and an ale or two," his eyes drawn to the glowing edges of the well used dice, "Next roll's a seven."

The grip remained. "Bet the bike on it?"

"It wouldn't be a fair throw, my friend. Now if you'd just let me pass, that'd be really cool."

"You heard him, Miller, next a seven or we get a free ride!"

Miller grinned at his friend, "And if it is?"

"Pilgrim wins a beating and we still get a ride!"

The old man smiled calmly, holding out his gloved hand for the dice.

The cubes dazzled in his fingers, "What do you see, brothers?"

The biker sighed, saddened at those who would not See.

"Five and two, then I'm having a drink." He glanced at the hand on his leg, "Now if you'd kindly give me some room to cast, brother?"

He tossed the dice, high, the would-be robbers following the arc, Miller reaching into his belt for his skinning blade.

The two bodies hit the ground before the dice fell, the old man entered the inn, not bothering to look back, keen for his ale.

As blood pooled around the severed, tattooed head, dying eyes had just enough time to register a two and a five. White and black patterns in a tide of crimson, it really did look quite beautiful.