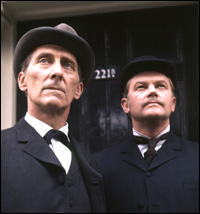 The great detective and his associate were in their rooms, when the doctor spoke.

'I see there's a domestic exhibition at The Crystal Palace next month.'

'Lestrade of The Yard has invited us along and is paying for supper afterwards,' replied
the great man.

'Can you post these letters for me? But hold back this one.'

'Because I want them sent without MacPhail!'

'Are you working on a case at the moment? Asked the doctor.

'No, only a case of port,'' replied Sherlock, looking out the window at the heavy downpour.

'No but any port in a storm, old fellow.

'The game is afoot!' Holmes exclaimed excitedly, having seen a photo of a boot mark.
found at a local robbery, in the paper he was reading.

'What do you make of this gigantic footprint, Watson?'

'I'll give you a clue. Notice the tartan pattern on the sole.'

'Yes, Watson, this was made by a member of the ancient Caledonian race!'

'Is there no end to your genius, old man!'

('Is there no beginning to yours?' Holmes thought to himself).

With that the pair vacated Baker Street and headed to the scene of the Petrovich
diamond robbery.

In the trees, to the side of the estate, Holmes spotted something.

'Watson, do you see that man over there, who seems to be glowing?'

From here I can see that he works in the uranium mining industry and is Scottish.'

'That's astounding but how can you be sure of that of that, old fellow?'

'Because every Macleod has a silver lining.'

Seeing that he'd been spotted, the man ran off, with the pair in hot pursuit.

Doctor, stop! Look, there's a body in the bushes! The victim had, had his head smashed in.

'There's nothing we go do for the poor man, he's dead,' said Watson.

'Doctor, looking at that wound, what can you tell me about the weapon used to dispatch the victim?'

'Well it was blunt and could have been made of anything, as far as I can tell.'

'Then you didn't note the sand on his forehead, where the blow had been struck?'

'No, I don't see the significance – it could be a stone, I suppose!'

'It's not just a stone – it's sedimentary, my dear Watson!'