A Trip to the Makgeng Region

A TRIP TO THE MAKGENG HILLS

Makgeng is a small community not far from Zion City, where every Easter millions of members of a local Christian branch congregate. The region itself is rural and rather pristine. We were only four: our organizer, Marianne McKenzie, Paul Zaayman, Quentin Hagens and I. The aim of our excursion was to enjoy the flowering aloes. These are mainly the tall Mountain Aloe, Aloe marlothii. There are also some smaller aloe species, but the mountain aloes are by far the dominant ones. These aloes grow on the hills in their thousands or likely even millions, and flower in winter. Their tubular flowers are open, with protruding anthers, offering easy access to the copious, sweet nectar inside. Even birds with fairly short bills can probe in and drink the nectar. In the process, their bills, throats, faces and foreheads become stained bright orange by the nectar and pollen. This might lead to some identification problems for any novice bird-watcher who happens to be around and would be hard pressed to find so many orange-faced birds in the standard identification guides!


The wonderful thing is that at the time of mass aloe flowering, birds that are otherwise not nectar specialists will drink the nectar: weavers, orioles, woodpeckers and more. Other food tends to be limited in the dry wintertime over here, so the aloes are life-savers. On the occasion, we saw large flocks of red-winged starlings, a species that is not uncommon but rarely seen in groups, who flew in especially for the aloe nectar treat. These starlings nest on cliffs, and likely flew in from around the Wolkberg mountains to the north.


Another bird we were amazed to see among the aloes, was the dapper Fiscal Flycatcher. Small and unassuming with its neat, plain black-and-white plumage, it is ordinarily a hunter of small, flying insects. An orange face fits its look quite well!


We saw numerous other birds, including lazy cisticolas, goldenbreasted buntings, waxbills, pied barbets, chinspot batises, and southern boubous. Raptors were in evidence: gymnogenes/harrier hawks and jackal buzzards flying past. They were less after the nectar than after the nectar-feeders! The starlings mobbed the harrier hawk; in numbers they can easily stand their ground.


Insects were in evidence, including butterflies, huge poisonous grasshoppers, and masses of tiny little red bugs (Hemipterans). This time we saw some reptiles also, a species of skink as well as a tiny dwarf gecko.


For me as always this was an occasion to get some nice photos of the landscape and of plants. Here are a few. First of all you see a shot of the typical landscape. Here are some tall aloes, and a large Euphorbia ingens, a big, branched, cactus-like plant. The genus Euphorbia is amazingly diverse both in variety of shapes and sizes and in number of species – about 2000 are known and many more certainly await discovery. South Africa has about 300 known species. This species is one of the largest, growing over 10 m/33' in height and spread. You'll soon see another, very different species from the same hills. Euphorbia is not an actual cactus, but in the spurge family. Many species are amazingly similar to cacti for having adapted themselves in similar ways to survive in deserts and dry regions. But while you can get drinkable sap from some cacti, the sap of Euphorbias is incredibly toxic!


Here is another landscape shot, actually the interior of an enclosure to hold cattle (but the cattle were out feeding at the time). This gives you an idea of what the landscape here looks like in winter. It is dry, with lots of dead, brown grass. Many trees and shrubs have dropped their leaves, though a few still hold theirs. It was interesting that we saw some shrubs of the same species that were in full leaf and bright green in one spot, while other individuals nearby were dry and with brown or fallen leaves. It likely means that some have access to underground water while others don't.


Here Marianne McKenzie poses to provide some perspective to some Aloes and a big Euphorbia.


Here Marianne also poses to show the size of this Corkbush, Mundulea sericea. This cork-barked plant is usually a shrub, but here grows to tree-size. In winter you only see its greyish leaves, but in spring and summer it sports beautiful pink to purple flowers. It is in the pea family, one that includes a great abundance of beautifully flowering herbs, trees and shrubs, especially diverse in South Africa.


Now for the aloes! The mountain aloe, according to plant guides, reaches a height of 6 m/20'. Obviously the aloes on these hills haven't read the guides, because many were over that height! Here's one that stood enough out in the open for me to take a shot of it, again with Marianne standing to provide scale (she's 157.5 cm/5'2"). Fitting her length into the height of this aloe, using Photoshop, I worked out that this one stands over 7 m/23" tall. There were many around this size, some likely even taller.


But even smaller aloes were quite lovely. The flowers are often deep orange, and the thickly succulent, thorny leaf rosettes also turn reddish in a dry, sunny winter. Not only were there large and mid-sized ones, there were also many babies, proving the population to be healthy and actively self-propagating. 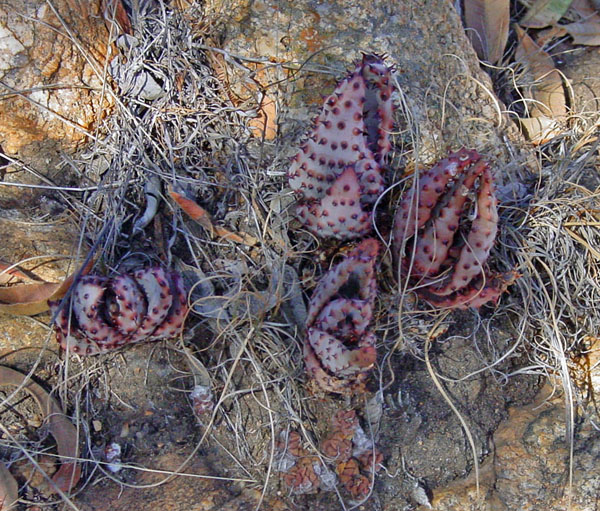 Here you see a clump of babies. They're very prickly, to arm them against herbivores. Their sap is also very bitter.


Most small ones were growing either in cracks between rocks, or in the shelter of small Euphorbia clumps. These were not the large ingens, but a much smaller and more delicate species. In my report of a previous outing to this region I said they were Euphorbia schinzii, which now seems to have been a mistake! Bronwyn Egan, the botanist at the University of Limpopo, told me they'd done genetic analyses of the small Euphorbias in this region and found them to differ from schinzii. They are outwardly similar, but not totally, to the rare Euphorbia clivicola of the Polokwane area. So we likely have a new species here. These ones turned an attractive purple in open, sunny spots, but remained green where shaded. They formed open cushions containing lots of narrow, thorny stems. Such clumps are excellent spots for young aloes to grow; in an Euphorbia tuft, the aloe gets additional protection from the thorns and the extremely toxic milky sap of its 'nursemaid' plant. Here you can see one – the prickly leaves poking out amidst the mass of finger-like thorny stems:


Here is a Euphorbia clump without an aloe, to show its purplish-pink colour (see above).


Another species of aloe, far less abundant but also quite pretty, was the large, branching, shrub-like Aloe arborescens or cliff aloe. These ones growing above a rock sheet were turning an attractive pinkish colour. It's actually a very widespread species, abundant and dominant in high-altitude, high-rainfall mountainous regions, especially around rock outcrops – though I've even seen them growing as epiphytes in the crowns of huge Outeniqua Yellowwood trees.


Rocky hills like these are ideal for numerous succulent plant species. They typically grow around rocks or in cracks, places that can get very hot and dry but also channel water into trickles that the roots of the plant can access. Here on the margin of a rock ridge you see some pretty Pigs-Ear Cotyledons, Cotyledon orbiculata. This succulent grows almost over the entirety of South Africa, from harsh deserts to moist, rocky grasslands, and in a number of different forms. This local form is typical, with round, red-rimmed, greyish-green leaves, and pendulous flowers. It is a member of the Crassulaceae, an almost cosmopolitan family with many succulent species beloved by gardeners and collectors.


Another member of the Crassula family, is this, Kalanchoe sexangularis. These are much-branched and shrub-like, achieving up to 1m/yard in height. Their leaves turn bright red in sunny spots in winter, contrasting with their greenish-yellow flowers (not present in this photo, sadly).


I was teaching Marianne how to distinguish between Cotyledon, Kalanchoe and Crassula on this trip. Here you see Crassula swaziensis, a small species with attractive, round leaves which also tend to turn red. It's a little gem not at all rare in our region, and makes a lovely specimen for a rock garden or small container in a sunny spot such as a windowsill. Crassula is generally smaller and finer than the other two genera, but typically has conspicuous fourfold symmetry to its leafy rosettes, and flowers with five petals (unlike the four petals in Kalanchoe), that tend to face upwards rather than hanging down (as in Cotyledon). Crassula is by far the biggest genus (in number of species – quite the opposite in physical size) in South Africa.


Here you see tufts of a tiny Crassula (I'm not sure which species) growing happily in crevices below some rocks. And above the rocks grows a succulent member of the daisy family, a Senecio barbertonicus.


And here you see the botanical photographer in his natural habitat! This was me taking the above photo, photographed by Paul.


And finally here are the other three explorers of the day, Paul, Marianne and Quentin, together at a fine aloe. Thanks to all for making it a rewarding and enjoyable day! 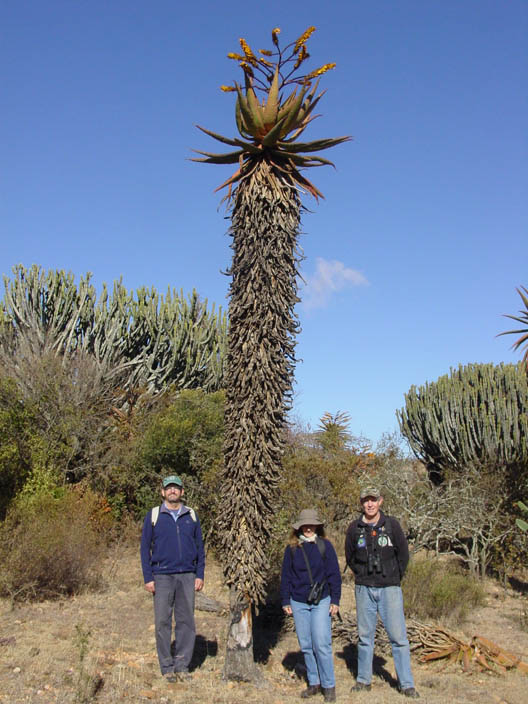