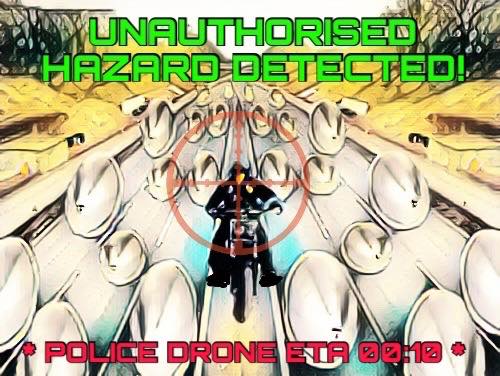 Looking down on the immaculate highway, he breathed in deeply. Not one whiff of petrol, diesel or exhaust fumes reached his nostrils.

His ears fared no better in the search for automotive sensory stimulation. Hundreds of vehicles raced by below, sixteen lanes wide, all perfectly spaced, safety equidistant, a perfectly constant 100 kph, not a sound but the faint whistling of parted air and the odd crunch as an unsuspecting bird flew into the fast moving but silent menace.

Eyes mourned the sterile vista, each and every vehicle the same aerodynamic shape, computers knew nothing of style or individuality, merely churned out units that, by design, were perfect for their task, no more, no less. Trucks, taxis, 'cycles all formed that hideously sleek, slightly egg-shaped pod.

He left the bridge, heavy boots crunching through the undergrowth of the off-ramp slope, no need for humans to prune the trees and hedges now, the autos didn't need line of sight. Grass verges became mini forests, havens for wildlife amid the silent rush of perfection. Clean air and greenery reigned on the highways.

He crouched low as a huge silent bus pod slowed for the bend, faint shapes of equally silent passengers typing at pads, plugged into the machine, oblivious to speed and movement. Not one passenger bothered to look outwards, safe in their cocoon, no need to enjoy the journey, indeed there was nothing to enjoy, The freedom of being on the roads was truly dead. Boredom was King.

A king he refused to bend his creaking knees to. An impostor on the throne, subjugating the masses with silence and safety. Benign boredom wearing a stolen crown.

He raged inside his shaggy head as he worked, each sound of metal on metal seemed like gunshots in the unnatural silence of the roadside. Finally it was done.

He breathed deep as he unscrewed the can, sweet gasoline! Stale and ancient, gloriously golden fuel glugged noisily into the teardrop tank. His eyes feasted on the almost forgotten sight, teardrops of his own signalling his joy and sorrow.

Pushing away the brush, he finally smiled as he swung his right boot over the low-slung seat. Hands gripped the bars, heart racing.

Turning the beautiful key, the key to his personal kingdom, for what he knew would be the last time, the big engine roared into life with one kick, bellowing defiance at this sterile, silent world.

The bike rumbled over the grasses, tyres biting hungrily into Tarmac as he wheeled the Harley around, cruising down the ramp against the traffic flow.

Artificial minds recognised a hazard and transmitted the anomaly to Others, avoiding the alien object, continuing silently on their way, easily plotting his trajectory, calculating speed and direction, he was an island, pods flashing by at a perfectly calculated safe distance.

He rode this way to the next intersection, parting the surreal swarm, hundreds gliding perfectly around him.

Soon bored with his futile game of chicken, he turned off, bumping the bike over the narrow central reservation, (no need for high curbs or armcos in this ultra-safe place) traffic on the other carriageway adapted to his prescience, another bow wave of rushing pods easily weaving around the Harley hazard.

Accelerating now, wind in his hair, engine in his ears he opened the throttle. The swarm parted, neither startled or indignant as the noisy beast overtook, polluting the air and shattering perfection, merely parting to keep optimal distance from the growling hazard.

The three pilotless police drones, having checked through long unused programmes, descended in a perfect silent triangle over the highway, each a perfect distance from the unauthorised hazard.

The Others were beamed a warning and sixteen lanes silently stopped, perfectly safely at a perfectly programmed distance, as rockets were launched and the hazard evaporated in a perfectly silent, non-polluting explosion.