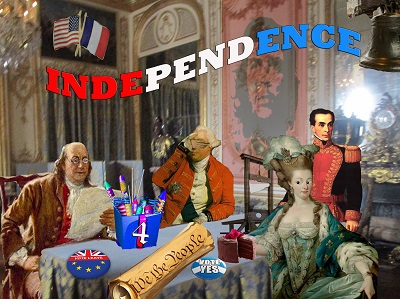 A couple of hundred years ago, the ideas of freedom, independence, and individual rights spread like wildfire across the civilised world. In North America, there was the Declaration of Independence: in France, the Declaration of the Rights of Man, followed shortly by the less-popular Declaration of the Rights of Woman. Central and South America followed suit with their revolutions and independence movements. Britain hastily threw the rabblerousers out lest that sort of thing spread to their shores. You get the idea: Independence was all the rage, and July is the month to celebrate its beginnings.

So: what does independence mean to you, personally? How do you exercise your independence? More importantly, does this need for independence clash with that other need, the need to belong to a group? What independence are you willing to sacrifice in order to be part of something else? We want to know how you deal with this issue.

In between the picnics and fireworks, take some time this month to ponder the idea of independence and belonging. We really want to know what you think!