League of the Dead 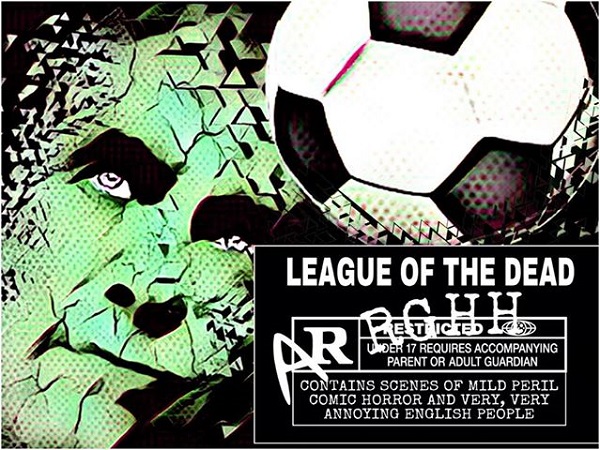 Gary Shearing smiled his smile and pointed his famous ears towards camera four.

'Now, we are all supportive of the fantastic work the FA do to stamp out racism, sexism, homophobia and the like in football. What you might not be aware of is the recent Ruling on Deadism!'

Players from Barnston Rovers walking off the pitch, refusing to shake hands with their defeated opponents.

'Sad sights on Wednesday evening following the 23 -0 victory at Barnston. Players being very unsporting there, Tony?'

'What you have to appreciate Gaz, these players are worried, quite rightly in my opinion,' sincere I'm-talking-from-experience look, 'about injuries picked up in the game and, more worryingly; the possibility of infection and contagion through physical contact with the erm, the , er the opposite team.'

'But it's a physical game Tone!' Boyish grin, 'My shins still remember being tackled by you back in the day!'

'Few bruises, maybe, Gaz, but this is serious stuff.' Concerned frown to main cam, 'We're not just talking about cuts and scrapes or catching a cold or vegetarianism or something here!'

Bobby Hanson jabbed at the remote, freezing the pub's TV on the two laughing presenters.

'See? That's the kind of prejudice we're up against, serious subject and what do we get? Bloody jokes about being sick as a carrot on bloody Match of the Day! Disgraceful!' He paused to push his jaw back into place.

'What we need is a win, Skip, a big win on telly, then they'll maybe stop taking the micky?'

'What we need, Kev, is a serious transfer, some famous player to lead us, grab a few headlines, prove we're serious, stop the prejudice, win over the other clubs and the fans!'

'I think we may have the perfect candidate!' She let them take in the headline, 'Balls of Steel!', above a photo of a very famous footballer limping off after a career ending injury, before frantically searching her mobile for the agent's number.

Henry Letterbox sat miserably in his Essex kitchen, every bleedin paper had him on the front page. Instant fame. For all the wrong reasons.

And so on. Henry couldn't understand the bleedin' media, the home fans had cheered the tackle, thought he was a bloody hero! That Frenchy was sure to score!

His club, however, were not so supportive. Instant suspension, FA and FIFA investigating him for a bleedin' 'racially motivated attack'! Racist? Him? Never!


His agent had insisted on an immediate and very public (not that he could go anywhere nowadays without bleedin' reporters hounding him, twelve still stood outside his front gates!) visit to a local French restaurant, eating a meal with his black, Asian (and even a bleedin' Geordie) teammates.

The papers didn't care. Henry's career – as a professional defender – was done. Over! Gone!

Dreams of playing for England – gone.

Dreams of scoring a last-minute penalty against Germany in the World Cup – not a bleedin' chance now!

Dreams of continued corporate sponsorship from the crumpet factory – ha! He'd have to actually bleedin' buying his crumpets forever now!

Henry was still sitting miserably in his Essex kitchen when the phone rang for the umpteenth time today.

'Tell them to bugger off, mum!' When will these bleedin' reporters stop hounding him?

'Tell her to bugger off, too! I'm not eating any more bloody garlic!'

Henry breathed into his buttery palm, sniffing the imagined traces of French cuisine.

'Henry, lovely, she says it's important, a job offer, something about 'Bollywood'?'

'Oh great!' Sighed Letterbox, 'So now they want me to go to bleedin' China!'

Windsor Steel ran out onto the pitch, bravely and defiantly ignoring the boos and jeers of the home crowd.

Calling his team in to a huddle, he bravely and defiantly ignored the stench of rotting flesh and started his pre-match team talk.

'Ok, lads. This is it! Win this one and we're in the draw for the knockouts. Televised games, Match of the Day! So let's get out there, give them your best and this time next week we'll be wiping the stupid grin off that big eared prat's smug face! All I ask is you give me your best, play hard but play fair...and Dave? That means no biting the Ref's head off!'

His team mates shuffled into position, Henry took a breath and the whistle blew.

'And with me now, 'man of the match', scorer of a double hat trick, and the new player / manager, Windsor Steel!' Gaz gushed, pushing the mike into his face.

'So what's it like to come out of retirement and work with these, erm, these, er..your..'

'Great to be playing again but 'teammates' Gaz, they're my teammates! Or are you gonna drop the Z Word...again?'

'Erm...And six goals, Windsor, you must be chuffed with that?'

Henry was in a foul mood by the time he arrived at the production company.

No crumpets on board.

One of his bags had decided L.A. just wasn't its scene, dude, and went to Singapore instead.

The thirty minutes standing at arrivals. Waiting for his driver. Half a bleedin' hour standing in front of a guy with a sign proclaiming 'H.Mailbox', bloody Yanks!

Then to be greeted by some long haired, pot-smoking hippy, not a good day.

'Firstly, dooood, never, ever bleeding call me H, ever! Secondly, I was told this was a footy flick, not a bleedin horror movie, I'm a defender not a' actor!'

'Ah! That's the point H...enry...dude, a soccer tale, team fighting against all odds, underdogs coming through!'

'Will Pele and Michael Caine be in it?'

'Erm, no. But, you, Mr 'Hellboy' Letterbox, will be perfect for the lead, and you understand this soccer stuff! Perfect!' Swann lit another, 'and, to jump on the rights bandwagon, what could be more fitting when it comes to all cool things equality- and diversity-wise than 'Dead Lives Matter'?'

Henry nearly choked on his muffin.

'Thanks dude!' Steve's pupils widened even more, 'and we get to go on location! Scotland, England ,baby!'

'So we're doing a feel-good, footy based zombie slasher pic....with the bleeding emphasis on being politically bleeding correct and inclusive..?'

'Bingo, dude!' For some bizarre reason Swann touched his nose and pointed at Letterbox. 'P.C and 'inclusive', lovely word!'

'Ok 'S'...' Letterbox eyes had an evil gleam, he was beginning to like Hollywood, they were all actually dumber than footballers!

'When we get to Glasgow?'

'Please, please, be sure you tell every local how thrilled you are...?'

'To be filming in Scotland...that lovely part of England!'

'Done and done, my pleasure, dude!'

'Great Steve....And I promise I'll visit you in hospital!'

5. Getting ahead in the movies.

'I don't think I've ever commentated on a game with this much tension, Gaz, or this much injury time added!' Tony glanced at the clock, the game now in the last of the record-breaking 42 added minutes.

'Steel has the ball, a quick one two with the number ten, Steel's in the channel, he sets it up on that sweet right foot....Ooooh, that was nasty!'

Steel drew back his boot, six yards from the box. Two – two, forty seconds to go. Get this and his team win the Cup!

The goalie out of position, open space to his right.

Windsor's legs are suddenly taken out from underneath him by the big lumbering substitute fullback.

Close up on the agonised face.

ECU on the broken shinbone sticking through his once-white sock.

Ref blows for a free kick, red card for the dirty tackle, the number three shouts abuse before being escorted off.

The crowd roars as Steel hobbles to his feet, refusing to go off despite his shattered leg.

A whispered conversation with his two wingers, Steel limps painfully to the right with his number nine.

The wall is set, the whistle blows.

The free kick comes in high, way too high for any player to reach.

Steel reaches out and rips the head off his teammate, throwing it in a bloody arc, up and into the penalty box.

The head meets the ball perfectly, goal keeper can only stand and watch, as ball and smiling head sail past him and into the net!

'Is that legal?' Asks Tony.

'Apologies to our viewers, Gaz is obviously excited, but that doesn't certainly excuse the offensive Deadist remarks!

(Of the film ....but the beginning of bleedin stardom for Henry 'Hellboy' Letterbox.)