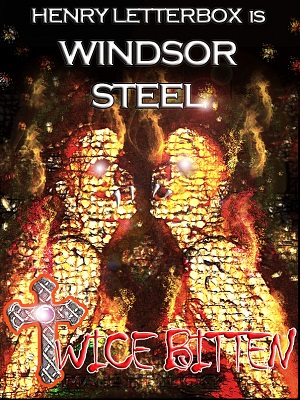 
That night Henry Letterbox had a dream, a brilliant dream, actually.

Not the usual brilliant dream in which he usually scored the winning penalty against the Germans in the last seconds of the World Cup final.

Not even the brilliant dream where he starred in the remake of Escape to Victory with his footy and film star idols.

Nor the equally brilliant one where he inherited a crumpet-and-butter factory!

No, that night Henry Letterbox dreamt he was in love. Brilliant, all-consuming Hugh Grant-style love, or maybe it was Cary Grant-style love...definitely one of the Grants.

What wasn't quite as brilliant was that the girl he woke up pining for was his not so friendly, love-bite sporting co-star.

That day Tonya Cobb had a dream, a brilliant dream, actually.

Not the usual brilliant dream in which she hadn't been killed on a family trip to Romania some five years earlier, leaving her twin heartbroken and alone.

Not even the brilliant dream in which she could walk in the sunshine again, eat garlic and see her own reflection.

Nor the equally brilliant dream that saw her with a swimming pool filled with warm, fresh AB RhD positive.


What wasn't quite as brilliant was that the man she woke up pining for was her twin (and very much not yet a vampire) sister's co-star.

Windsor Steel pinned the Master against the coffin. Sheer malevolence glared back at him through ancient eyes.

'This is for my Cassandra,' he whispered into the bat-like ear, 'May you burn in Hell!'

'Kill me, and the girl is lost forever!'

Steel stayed his silver stake, a quizzical look on his face.

'Spare me and I will return her to you, human in form, all trace of the Vamphyri expunged!'

Steel turned to face the clawing beast his beloved had become, chained now, waiting for dawn to finish what his heart had been incapable of doing, sweet release,but not by his hand.

Could she ever be the same sweet girl, would she love him as a mortal once more?

For a split second Steel was tempted. Then,

'As I said, beast, go to Hell!' Steel plunged the stake, flaming ashes erupted and there, Cassandra, sweet Cassandra, seemingly human once more but all trace of life gone.

For the second time, Steel said a tearful goodbye to his love, as, in the shadows, the real Master cursed the fate of his second in command and cursed some more at the prowess of Windsor Steel.

He whispered in a heavy Romanian accent, ' I will have my bloody revenge on you, Mister Steel, and upon all humankind!'

'For the second time...what do you want, Henry?'

Letterbox stood, feeling rather silly, and very English, with a rapidly wilting bunch of flowers, outside Sonia's hotel room.

'I just thought we might get a drink, something to eat? Erm, together? Kind of thing?'

'Look Henry, I respect you, a little, as an actor, but other than working with you....' She trailed off.

Henry was heartbroken. He'd spent the morning daydreaming of romantic dinners, romps through meadows, snowy drives in a horse-drawn buggy, that kind of thing.

The afternoon had dragged. Take after take of fill-in shots, links and continuity shots, sound checks and promo stills.

Now, as night fell, so did Henry's spirits. Just dreams, after all.

'So you're saying I'm not your type?' He tried. Little boy lost look on his face.

'No Henry, I'm saying you're not the right sex! For me I mean, look, I'm flattered but I have a girlfriend ...you know?'

Henry, never the one to be put off or bashful, 'So you're saying, if you weren't bleedin' batting for the other side, you'd deffo fancy me, right?'

Sonia, never the one to be cruel or sexist, 'OK Henry, yeah, you're great, very attractive in a rough kind of stupid laddish Brit way, so, what evs, as you say'.

Pleased with the fact he hadn't been totally rejected, Henry cheered himself up with a few lavishly buttered crumpets and a nice cup of tea (proper Tesco's English tea, not that foreign rubbish) and sat back to watch his favourite footy game.

With six minutes to go on the DVD (before he was sent off) there was a soft knock on his door.

Pausing the action, just as he tripped and fell onto the bleedin' Frenchman, Henry was surprised, and extremely bleedin' chuffed, to find his co-star at his door, dressed in a sexy nighty too!

Henry, puzzled, but not believing his bleedin' luck, bowed theatrically, opened the door wider and bade the fair lady welcome. (A line from his movie Bleeding Swordz)

Tonya Cobb, invitation granted, wafted across the threshold, captivated by Henry's looks and the fact that his intoxicating blood smelled just like butter.

Next door. Sonia sat on her bed, surrounded by empty plates and steak bones. She lapped up the juices off her plate from her final t-bone, mmmmmm, delicious.

Room service had been a little flustered when one of the Hollywood guests had requested a dozen raw steaks but not surprised.

They'd had stranger requests from the L.A. party.

After two weeks of playing host to the film cast and crew, they expected a little weirdness.

Sonia's stomach still rumbled, how could she still be starving, and so very, very thirsty?

She glanced at the bedside clock, green numbers mourned the closing of room service some fifteen minutes ago.

Ravenous, she suddenly remembered the one person who always seemed to have food and drink.

She shuddered at the thought of knocking on Henry's door this late, worried he'd get the wrong impression. Her stomach forced her out of bed.

Standing in the corridor, heedless of the blood and juices decorating her rather too sexy nighty, Sonia took a deep breath and knocked softly.