FWR says: If energy/matter cannot be made or destroyed, what happens to the energy put into half-written tales? Imagine a world where frustrations are taken out on fictional characters and man's worst traits bleed through into the story line....

You are now entering the Nightshift Zone...again! 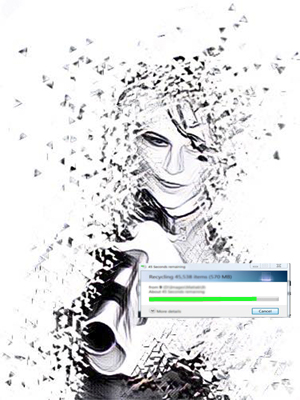 Charlotte felt her heart pounding against her tightly cinched and boned corset. Surely this was the Devil's work? How could this perfect stranger capture her heart so completely, so perfectly?

Her heart skipped again as he flipped the immaculate calling card onto the ornate silver platter and strode to the blazing hearth.

Not one word had passed between them, merely glances: hers demure and downcast, shy and proper.

His more demanding, insistent, confident and so very, very….

'Rubbish! Total and utter garbage!' He cursed and hit Control, A and Delete.

Reaching for the bourbon, he poured with one hand, the other interrogating the search engine for anything that might spark his creative juices.

The idea for the story was there; it was just he was finding the incessant research extremely, annoyingly dull.

Sweet girl enticed into a loveless marriage to….

'What on Earth?' Charlotte stood in the vast white nothingness, naked and somehow undefined. She tried to focus on her hands, details lost in the White, her very flesh uncertain before her eyes. The only certainty, her name, all other details escaped her.

Her suitor stood, motionless, caught in the freeze frame of the moment. Thankfully blurry in his nakedness.

Charlotte blinked, emotions and intelligence kicking in, as she sat in the opulent railway carriage: unfamiliar scenery hurtling by as her new husband clutched her hand and pointed out strange mountains and even stranger flora.

'And there, my love, we will build the ranch, over there, the stables and paddocks, facilities for coaching and obviously the hands can live....'

He'd gotten as far as the States, but looking blankly out at the dull grey Cheshire morning, once again the Devil's details confounded him.

The naked, smooth outline of the male next to her, diffracted in the White, losing definition, becoming fragmented as….

Charlotte flinched as she backed into the hard kitchen cabinets. Whiskey breath on her neck, cruel hands at her shoulders.

Fingers hurt her flesh as she tried to push him away, resist the drunken beast her husband had gradually become in such a barren place.

Unwelcoming, infertile, hostile, she almost smiled through her fear at the irony, but….

'For God's sake!' Three hours! For what?

Why was it so hard to give these bloody people a happy ending?

Why did every sentence pounded into the keyboard have to come with yet more mind-numbing research?

Who cared what colour the seats were on a bloody train that had been scrapped over a century ago?

Why would someone object if he put a zipper, and not hook-and-eye buttons, on her dress?

As he opened another bottle he realised one thing.

He was beginning to hate this bloody girl!

Charlotte stood arms up in self defence, but only the Whiteness assaulted her.

He stood, slumped and vaguely translucent only inches away. Why did she feel such hatred towards this figure?

She tried to recall but all was blurry. Her mind as blank as the Whiteness that engulfed everything, not one

'More step, I swear it!' Charlotte held the pistol in trembling hands, resolve unwavering as the beast smiled and held out hands in supplication.

The cycle of violence, regret, silence and, eventually, forgiveness would begin again.

Until the next cork was pulled.

Her finger tightened on the trigger. Enough was….

'Enough!' The cheap glass shattered against woodchip, bourbon adding to the brown swirls of the nicotine stained paintwork.

Files highlighted, dragged into the bin.

'Do you want to permanently delete these items?'

The door slammed as the computer was still counting down delete time.

Hourglass spinning on a screen of white.

In the Whiteness, Charlotte stood, naked and fading, but strangely calm, strangely comforted to know she was alone.

She smiled and succumbed willingly to the intricately detailed, beautiful nothingness.