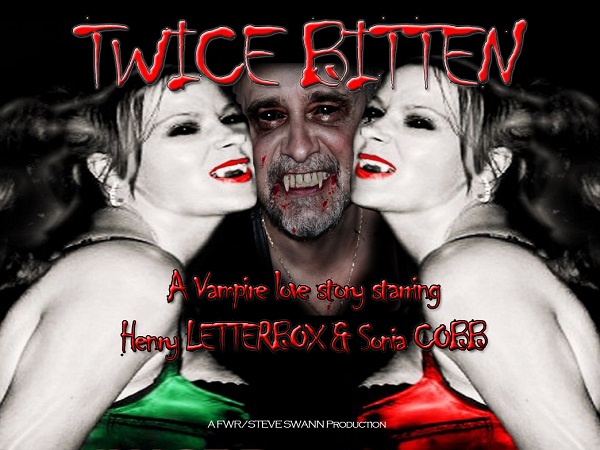 The creature gave a vile, hissing laugh as Steel forced the wooden crucifix into its cheek.

'That only works in movies, you English fool!'

Windsor Steel looked down with a boyish grin at the cross, 'Really? Oh well, what about this then, me old mucker?'

Flipping the cross in his exquisitely manicured fingers, Steel plunged the longer end into the beast's evil heart.

A violent eruption of glowing ash filled the corridor of the abandoned prison, Steel moved on.

From the far left-hand end of the corridor a woman screamed, his woman, screamed.

'Guess I'm gonna need a bigger cross!' He laughed as the nearest vampire burst into ash, continuing his well-timed arc to impale the second and third in one movement.

Henry sat in the hotel room, cursing both his agent and the poor standard of Romanian butter as it totally refused to melt into his crumpets.

'Some of us have bleedin' plans, mate, some of us have a life, you know? Away from bleedin' horror movies.....yeah, I know and I don't care! I am not bleedin' missing the Cup Final, VIP box and me mates to go to bleedin' Cattleprod Island or whatever, don't care how much cash they're offering.....how much? .....Really? That much, bleedin' hell! Tell you what, me old cocker, I'll tape the match, book the bleedin' flights!'

Poking the congealing Napolact into his cooling crumpet Henry smiled. Jeez, the money these buggers pay for a bloody zombie romp.

Easy cash, Californian sunshine and hopefully a pa who could maybe manage to scare him up some proper bloody tea and crumpets!

'Two bleedin' weeks without a decent bite!' He threw the crumpets away and went down to the bar instead.

Passing the doorway of the room next to his, occupied by his newest co-star, Sonia Cobb, Henry smiled again as loud groans and banging noises came through the thin walls.

'Sounds like someone's having a good time!' He banged on the door, 'Don't do anything I would, love!'

He was still smiling as the elevator doors closed – just as Sonia's bloodied and limp body was dragged out of her room by a very tall, very pallid Romanian dude.