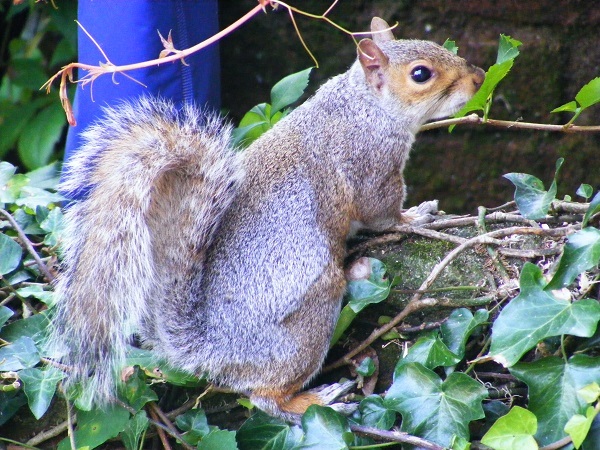 Another view from a window. Cats are asleep: that's good, as we have a timid animal to look at, and they would try and chase it.

An early Spring squirrel: he or she was exploring a garden, just foraging, what for, who knows. I spent some time watching him inspecting every bush that caught his/her eye.

The speed of the inspection was amazing a true acrobat rushing around with only a few stops to inspect each thing of interest.

Take a good close look at every animal you try and photograph: it helps you to bring out its personality.

The best feature of this squirrel is the fur; it is a fascinating blend of colour. The name grey squirrel does not do it any justice, I was surprised.

There is the expected grey fur; however, the undercoat is several shades of brown. there also appears to be black and even a hint of red and blue. The eyes are large and are part of their survival system – there are lots of creatures who have squirrels on their menus. The eyes and the large ears are their protection system. The long fingers and toes are essential tools of the grey squirrel's trade, and they are good at it. The tail is as long as the squirrel's body. It is like carrying a sleeping bag with you, as it does help to keep the grey warm in its dray1 in the winter.

The Grey Squirrels do not actually belong in the United Kingdom. They are immigrants and they have almost ousted the native red squirrels. The loss of the red squirrel is a shame, but there is hope, as there is a colony on the Isle of Wight.

The photograph was a matter of waiting; every few minutes the grey squirrel pauses to listen and look round. This the best time to take the picture – do not zoom in too close, or parts of the squirrel may be out of frame. Always take several shots. They seldom sit still, so you might get several different shots.

This photograph was taken in a garden in a busy town, so remember to keep a lookout for the next opportunity.

View from My Window Archive