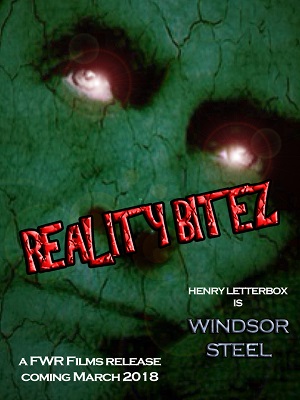 "Christ, Donna, these bleedin' pranks are gettin' way out of hand!"

Carly Cavachon tried and failed not to flinch as the big English idiot bounced up to her.

"It's Carly, Henry, Donna's my character," blank stares, "In the movie?"

"Now that is cool!" Carly gestured behind Henry to the three extras shuffling towards them, the make-up was exquisite in a very gruesome way. The effects guys had really gone overboard. "What the hell is that you've got, dude?"

Carly took a step closer, grimacing as the smell engulfed her, "The rotting flesh stink is a bit redundant though, just icky!"

Deep growls came from the nearest zombie's outstretched hand, the severed head that was once Abigail, moved its jaws, chomping at the air in front of Carly's face.

"Animatronics too! Wow, there goes the budget!" She turned her back and flounced off towards the director's office, maybe it was time her agent renegotiated her fee?

Steve Swann listened in shock, mobile phone jammed between ear and shoulder as he lit another joint. California and most of the southern states under a state of emergency, Washington gone, New York being evacuated, National Guard fighting losing battles up and down the country.

The studio had demanded the rushes be immediately handed over, a guaranteed blockbuster, an actual relevant movie, millions to be made if they pushed post production and got it out whilst the public were rapt with all things zombie-related.

Sales of the other DVDs in the franchise had skyrocketed as movie goers soaked up the gore, a modern-day survival manual on offer!

"Come in, sit Carly...ah Henry, please..." Swann finished his call, beaming at the two actors, "You, my friends, are about to become global megastars! Toke, dudes?"

Twenty minutes later, armed with various film props, backpacks crammed with all available footage and sporting fresh combat gear, Henry, Carly and Steve weighed up the weapons in their hands.

Not much to protect themselves.

Nope, just one small small hammer, a hastily sharpened camera monopod and (for some bizarre reason, probably because he was a soccer loving Brit) a rolled-up copy of the Sports News section of the Los Angeles Times for Henry.

The trio ran to the transport dump, jeeps, trucks, golf carts aplenty for the fifteen-minute drive to the ferry.

And that posed another dilemma.

Sadly, neither Carly or Steve could actually drive. Big city grid-locked life had removed the desire to learn, studio chauffeurs had further negated the necessity.

Henry point blank refused to drive. A D U I the previous year, no licence and the threat of time in an American prison if he was caught behind the wheel, had him running past the trucks, armoured cars, jeeps and motorcycles towards the one form of transport he could legally use.

"Come on you two, I've got a bleedin' brilliant idea! Steve, Donna, follow me!"

"It's Carly!" But Henry was already racing ahead.

Four more minutes and the trio rolled out of the set, Henry swinging the rolled-up Times, cracking pulpy heads and thoroughly enjoying himself.

Segways humming, as they raced towards the docks at a jaunty six miles an hour, the stumbling herd of flesh-eating zombies forced into an unsteady trot to keep up.